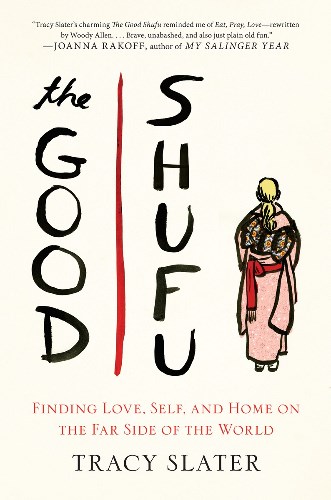 Tracy Slater, founder of the Four Stories literary series (and past ArtSake contributor), is about to publish her memoir The Good Shufu. We asked her about the book, her trailblazing work in the local literary community, and the surprise twist in her life story.

Why The Good Shufu (the title)?
“Shufu” in Japanese means “housewife,” and it’s a title that is both tongue-in-cheek and also a true descriptor of my official role as it was at certain times in Japan. The “good” part is pretty much always tongue-in-cheek; Unfortunately, I’m a terrible cleaner and not much better as a cook. But the book explores in part what happens when a highly independent American academic moves to Japan and becomes, essentially, an illiterate housewife.

“Shufu” is the job description most married women – even university-educated ones who had careers before marriage, and even ones with no children – have in Japan. A majority of women here quit working when they marry. It’s a future I never in a million years would have envisioned for myself. But it’s also the job description that existed on a number of official documents for me when I moved to Japan, such as my bank account record, my gym membership, and my medical forms. Since I married my husband and moved to Japan, I’ve worked off an on as a freelance writer for US publications and universities, but, especially once I started going through medical treatments there to try to have a baby in my 40s and let much of my freelance work slide, I essentially contributed nothing financial to our life in Japan and for all intents and purposes had the role of keeping the house and cooking for both my husband and my father-in-law (whom I absolutely adored). When I needed money, my husband gave it to me. When I needed to go to the bank or the doctor or sometimes even the post-office, he (or my father-in-law) went with me, because I didn’t speak the language (and still don’t speak much of it).

Another thing the book explores, though, is how surprised I was to find that this role didn’t bother me nearly as much as I would have expected back in my days as a single, independent Boston academic, and that the reason for that, I came to realize, was two-fold: 1) Because it was a role I essentially chose and knew that, If I needed to, I could back out of by returning to my own country and my old way of life, and 2) because much of the time, it felt like (and sometimes still does) just a role I was playing out of respect to my father-in-law and his old-world Japanese upbringing and even for my husband and the mores of his world. Because it was something I felt like I “played at” in my life in Japan, it felt separate from my real essence, my real American self, and thus didn’t feel threatening to me or what seemed like my “real” identity. And that ironic mix of “real” and “just role” was – and still is – fascinating to me, that something can be an actual, common, time-consuming part of ones (or my, at least) current life and even marriage and feel like just a role, and the reason for that was because the culture in where it was all happening, and where it was all coming from, wasn’t “mine.”

One thing about Japan is, there’s a strong sense here of who is Japanese and who isn’t, and if you’re not Japanese, you will never really belong. I’m OK with that, because I like being American. And one interesting way that belief system has ended up impacting me is to provide a sort of buffer in my sense of self between the things I do and the way I live in Japan, on one hand, and my sense of my “true” self (i.e., my “American” self) on the other. I realize this is all just a psychological state of affairs, and that therefor some might say the buffer is illusory or even self-delusion, but frankly, it works and it feels real to me – and I’m not sure I buy the equation of psychological vs actual anyway, so… 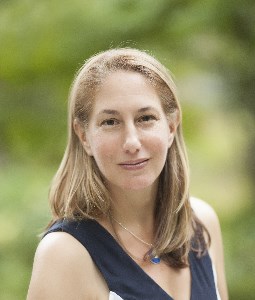 How has being part of (and leader within) a local community of writers impacted your work?
Four Stories has given me so much as a writer. When I started the series, I’d only ever written as an academic. I knew I wanted to start writing narrative, writing more creatively, and I knew after 6 years in a PhD program that I wasn’t going back to school to get an MFA, so Four Stories in many essential ways became my MFA program, I learned so much about writing narrative and telling stories from the writers whom I listened to as they read at Four Stories or whose work I became exposed to through the events. I still have a ways to go in learning how to tell masterful stories, but I believe I never would have gotten the start I’ve had if it weren’t for all I learned from Four Stories’ past authors.

The series also kept me afloat in my sense of myself as a writer in a way that became invaluable when I moved to Japan. It enabled me to stay in touch with the incredibly vibrant and exciting and supportive Boston literary community, even though I was literally halfway across the planet. I wonder if a little piece of myself might have just shriveled up and died without this, the piece of myself that fueled my energy and motivation to keep writing from so far away. For that as well, I’m deeply grateful.

How has the experience of living in a non-English-speaking country impacted the way you write?
Well, for one, I write a fair bit about being in a marriage where neither one of us shares a complete fluency – and all the surprising things I like about that. So I suppose if we lived in an English-speaking country, my husband would eventually become totally fluent in English in a way I don’t think he will just by being married to an American and speaking English with only me and only in our home.

There’s a lot more about this in the book, but I love his malapropisms and his totally charming – to me at least – way of speaking a language that isn’t his native one. To take an instance that isn’t in the book: the other night, I was totally exhausted, washing the dishes after dinner and after a long day where our toddler (who still hasn’t learned the meaning of “sleeping through the night” in either English or Japanese) hadn’t napped at all, and my husband was reading bedtime stories to her in the living room. So I hear him reading about the “itchy bitchy spider.” (Japanese substitutes a “chi” sound for our “si” or “sy” sound.) Well, that cheered me right up – in a way I don’t think even an understanding murmur from him or an extra hour of sleep could have.

The unauthorized biography of your life is titled:
The Bad Shufu. Of course, that would also be the more accurate title, too. If you could see the laundry piling up – or the poor state of affairs of my daughter’s bento’s (lunchboxes) when she goes to Japanese daycare, especially in comparison to the other mothers’ little cartoon character-shaped rice balls – you’d know what I mean.

Share a surprise twist in the Tracy Slater story.
A funny thing happened on the way to my fulfilling a book contract to write, in part, about sustaining a fruitful and meaningful marriage despite not being able to have children.

I wrote The Good Shufu after an editor (my dream editor, actually, but that’s another story) at Putnam read something that I wrote in the New York Times online and contacted me, asking if I’d be interested in submitting a memoir proposal. The article she’d read was about my struggle to have a baby in my 40s in a country where I didn’t speak the language and with a man whom I both loved deeply and who came from a very different culture – with very different views about parenting – than my native one. So when I submitted the proposal and Putnam accepted it and I started writing the book, it was supposed to end with me turning 45 and my husband and I being in a childless but still very meaningful marriage. Then, six months before I was supposed to turn in the whole manuscript, when I was 45 and a half, I became pregnant – naturally, if you can believe it. (I sometimes still cannot. And let me digress a second here in case anyone is reading this who is trying to have a baby and struggling: I’m thinking of you. You are incredibly brave for what you are going through. Not all stories end happily, I know, but not all the dire statistics or the “do’s and don’ts” are true, either. Here’s something I recently wrote with you in mind: https://thegoodshufu.wordpress.com/2015/04/01/getting-through-to-getting-pregnant-at-45/. I will be keeping you in my thoughts.)

In any case, obviously the ending of the book had to change with my pregnancy. I handed in the final manuscript, and two weeks later, at four months past my 46th birthday, I gave birth to our baby girl. As I write in the acknowledgements of the book, our daughter gave me a happier ending than I could have ever dared to dream.

What’s next?
I’m working on 1) getting our baby to sleep through the night, and then 2) cultivating the time and energy to write a book about raising a child in a culture so radically different from my own – especially a child who is a citizen of a country that will always, eternally and inevitably, consider me a foreigner. As I write in the last pages of The Good Shufu, which ends halfway through my pregnancy, “In a sense, [Japan has] now become an irrevocable part of my body, the flesh of my flesh deriving from a foreign world. How does one reconcile such paradoxes?”

Hopefully, while writing the next book, I can at least start to reconcile a paradox such as this.

The author will read from the book at a Four Stories event on June 26, 6:30 PM, at Middlesex Lounge in Cambridge. The book launch takes place on June 30, 7 PM, at Newtonville Books in Newton Center.

Tracy Slater is the author of The Good Shufu and founder of the award-winning global literary series Four Stories. She has published essays in The New York Times online, CNNGo, Best Women’s Travel Writing 2008, Boston Magazine, the Boston Globe, and more. Tracy earned her PhD in English and American Literature from Brandeis University and is the recipient of the PEN New England 2008 “Friend of Writers” award.