You are here: Home / artist to artist / Potentially Shocking Subjects in Art

Roughly once a month, we pose questions to artists about their work and lives. We recently asked a group of artists, How do you approach potentially shocking subjects (violence, sexuality, profanity, etc) in your work? 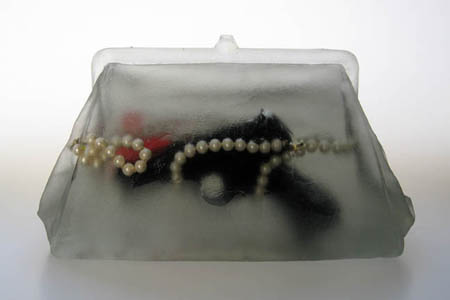 Judy Haberl, multi-disciplinary artist
My modus operandi is not to shock, or disturb per se, but to call attention to a subject or object. I am keenly interested in provocation. Dialogue. My work reflects my own observations about what I see, what I read, what I think might be an anathema.

My work often begins as a curiosity. The translucent purses began after years of making opaque sculptural purses, where there was no revealing of the interior. I am curious about what makes people tick. I have hunches. I wonder what each woman I see has in that defining object? It is like a portrait. Does she have a gun in her purse because she is afraid? Or is it because she is a murderer? Or just to feel empowered? Opacity is protective. Translucency is revealing, and potentially dangerous and fraught with the consequences of that revelation. Privacy has become impossible at this point in history. I’m not sure that it is valued at present. Privacy is a big topic… and a big problem.

I am not a promoter of violence, but artists speak importantly about violence in their work and via their work. Depicting a violent issue is not the same as promoting it. Some of the most powerful art is provocative for the very reason of calling attention to a horror or a problem. Art is a way to combat it. Art has played this role for a long time. I am grateful as an artist that I live in a democracy.

Ben Jolivet, playwright
Violence, profanity, and sexuality tend to pop up in my work frequently – I’m not sure why, because I’m pretty vanilla in real life. In many of my plays there’s a moment where one character is pushed to physical violence, when the words that are always there for them suddenly fail them, and they have to hit, punch, or claw their way into the point they’re trying to make. I embrace that, though; and profanity and sexuality. You have a cushion in a play, because nothing is “real” – so there’s a kind of safety. But you also have exciting moments where people forget that for a second, and because there are actual humans doing and saying these things, they can’t help but react aloud. Those moments excite me. I am surprised, though, how theatre audiences are shocked by foul language. I’m often criticized for characters who swear to much; often by folks with pretty aggressive potty mouths. That doesn’t change my writing, probably to my detriment; I write the way I hear people talk, and people – particularly where I come from – can be nasty. It makes for awful experiences at the grocery store, but some killer theatre. When I teach workshops, always say that plays aren’t about nice people doing and saying the right thing; they’re about nice and not-so-nice people doing and saying the wrong thing – so you have to be OK with getting ugly. I’m definitely OK with it. 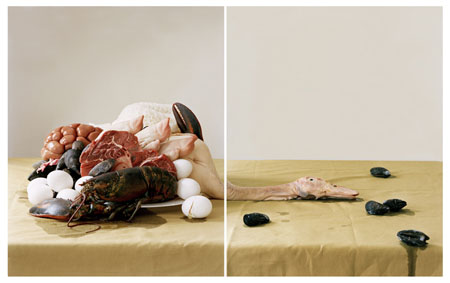 Tara Sellios, photographer
The visceral subject matter that is inherent in my work refers to ideas of carnality and the rhythmic cycle of life. The potentially shocking subjects of animal carcasses, blood, and viscera, and how they are arranged alludes to a larger narrative of instinct and desire in a temporal setting. Rendered in a precise, painterly manner, the repulsive in the photograph becomes curiously attractive, and emotion flourishes in objects that have essentially have none. Beauty in color, light, and composition is used to visually stimulate the viewer, to place them in a psychological space where they are encouraged to address the topic at hand, creating their own dialogue in their head. My intent is to create striking imagery that sticks with the viewer, imagery that promotes further contemplation prior to viewing. In the experience of life, darkness and light coexist with each other and relate to one another, which is a concept that I strive to incorporate in my work.

Ria Brodell, visual artist
With the depiction of both violence and sexuality in my Butch Heroes series, I always want to be respectful of the individuals I’m representing. I’m never very explicit when depicting their sexuality, though it’s often the reason they achieved notoriety in the first place. I will reference sex within the paintings if it’s a key element in their story, such as, if the use of a phallic “instrument” was used as evidence against them in a trial, but otherwise I want to focus on other parts of their lives.

In terms of representing violence, I’m referencing the style of traditional Catholic holy cards, and one thing I loved about them is that they often depicted violence in gory, dramatic detail: St. Bartholomew with his skin pealed off for example, or St. Sebastian pierced through with arrows. Yet, the violence was always depicted in a reverent way, if sometimes in an odd, or even humorous way, St. Lucy comes to mind, with her eyeballs on a plate. These explicit details were to remind Catholics how much the Saints suffered; I’m using violence in a similar way, as a reminder. 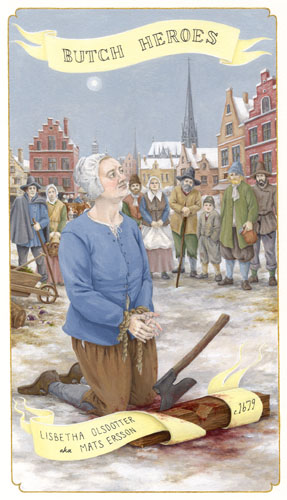 How do you address potentially shocking subject matter in your art? Let us know in the comments. And if you have an idea for a future question you’d like us to ask artists, let us know.

Ria Brodell is a visual artist and creator of the Butch Heroes series. Read a Studio Views post about Ria’s work.

Judy Haberl is a photographer, sculptor and installation artist. She is represented by Kayafas Gallery, Boston.

Photography by Tara Sellios was recently featured on Huffington Post. She’ll have a solo exhibition at Gallery Kayafas in Feb-April of 2015. Visit her Web site: www.tarasellios.com