Ben Jolivet was just announced as a 2013 Artist Fellow in Dramatic Writing (horns blare, confetti showers, etc.), so we were thrilled to learn that a new play of his, Get Rough with Me, will have workshop performances February 14, 15, and 16 (7:30 PM) at William Hall Library in Cranston, RI. 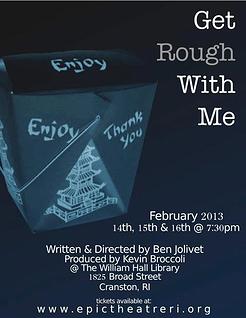 Finish this title: Fifty Shades of… (or: how does your play Get Rough with Me relate, if at all, to the popularity of said, alluded-to work of erotic literature?)
50 Shades of Everything. I can’t think of a time a book like 50 Shades has exploded this way. Movies, TV shows, sometimes books do it, but not this book – and not this kind of book. This fan-fiction-turned-best-seller incites all these jokes, arguments, parodies, and marriage counseling. I think that tells us a little something about life. People crave fantasy – apparently many of us crave super aggressive fantasy – and that craving can crack seemingly happy relationships. I’ve actually heard women ask men in Target, “why can’t you be more like the guy in that book?” And the guys look confused – they don’t get it. That’s really what inspired the play, but that book isn’t really a part of the play. I made up a book called Phases of the Moon that’s sort of an Elizabethan version of it. Because what I realized was that I didn’t want to write a parody; I wanted to explore the difficulty of making fantasies we create match the realities of our lives – and how people deal with the gap between what two people want from and can give each other.

What do you hope to see in the local new play community’s future?
My hastily-written wishlist: lots of new work, new plays, lots of handmade theatre, lots of work that tackles things people care about, and theatre that is sustainable. Theatre that’s THEATRE and theatre that’s generous – that’s a gift to its audience. For whatever those things mean and for whatever they’re worth.

What artist do you most admire but work nothing like?
Tony Kushner. I feel like I should be political and smarter than I am and that I should write more slowly. I can’t do it. I write fast and my politics are often covert and rather than grand and epic, I write small and snarky.

What’s the most surprising response to your art you’ve ever received? 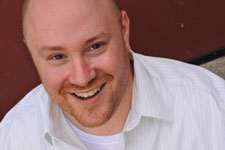 My first play was a long, hour-and-ten-minute monologue in which Lizzie Borden comes back from the dead and explains what happened the day her parents were murdered. It’s total camp (she rents an actor’s body, because she hates actresses; it’s totally anacronistic, there’s lots of cheap, hoary jokes) . . . but after one of the performances a woman said, “what an amazing way to talk about Columbine.” She’s the only person who ever said that to me – but she got EXACTLY what I was trying to talk about: what drives people to do awful things. She saw through the camp.

Computer, longhand, or typewriter?
Computer. My handwriting is illegible, and my spelling is appalling for a guy who majored in English.

Spring, Summer, Winter or Fall?
Fall, always Fall. I love Autumn. If I could move around and follow the Fall, I would. I love the chill, the color, the scents, everything. It’s why I wouldn’t be happy ANYWHERE where it’s summer all year.

What are you currently reading?
I have a stack of recently-published plays to read. I love reading new plays and seeing what people are creating. But the truth is, I’m really reading the new issue of Vanity Fair. Often, the happiest day of the month for me is the day that magazine arrives. I don’t know when I became that guy, but here I am. Yikes.

Get Rough with Me, a play by Ben Jolivet, will have workshop performances on February 14, 15, and 16 at 7:30 at the William Hall Library in Cranston, RI, produced by Epic Theater Co.