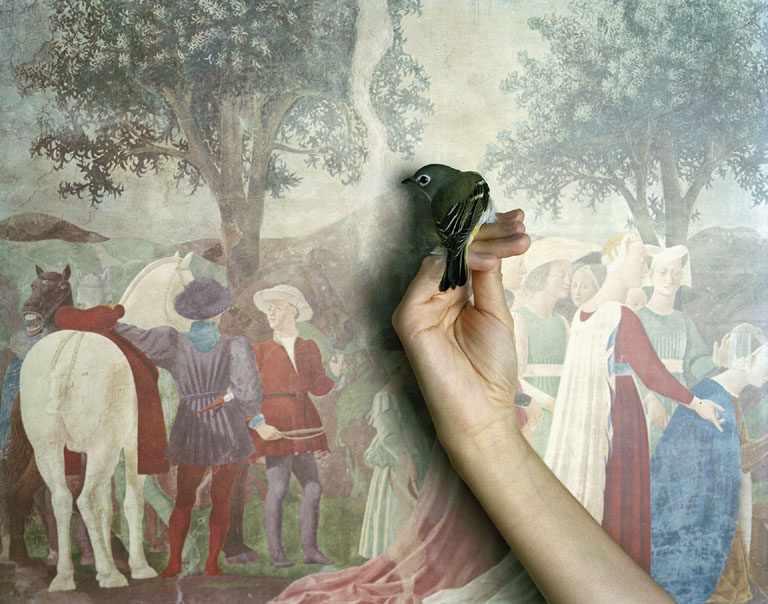 We recently asked artists to share the local artists that excite them. Here is part two of a two-part collection of their responses.

Ariel Freiberg, visual artist
I feel lucky to be living in Massachusetts’s ever-expanding landscapes of creative and inspiring practices. At the moment, these are the artists have me twirling. Natasha Bregel makes tenderly painted domestic scenes, where memory and cinematic languages merge in her painted world on a micro plane. Sometimes the surface is a hoop that is suspended in space, like a film stretched out to reveal a hidden narrative. Recently, Natasha has been experimenting with drawing on the wallpapered walls. The drawings are derived from a collection of historical family documents. Eric Petitti‘s work, now up at Proof Gallery, invents a future history through artifacts and documents. The “historical artifacts” are full of codes and clues that contradict and mimic the inherit constructs of truth, fact and history. Of the artifacts, I’m mesmerized by the hyper detailed ink drawings, which look like lithographs from the 1800’s. Another talent exploring perception of visual materiality is photographer, Yola Monakhov. Yola “re-envisions the documentary genre” of photography. Her series, Tableaux (part I) represents vivid birds and typical “still life” objects between the stage of studio photography and the natural world. With some of the birds you wonder if they are about to take flight or is it all just an illusion of life. The playful nature of the imagery hints to the pulse of the subjects.

Rick Ashley, photographer
When asked to write about some photographer(s) whose work excites me, a number of names ran through my head. I first thought about two former students, men of a certain age – mine, Jim Hooper and David Weinberg. Jim was a student of mine at CDIA. We were both from Baltimore, and had far too much in common. Jim recently teamed up with his friend Buff Chase, a developer, and produced The Providence Portrait Project. One hundred and twenty-two people and over 19,000 shots later, Jim has created a wonderful tribute to Providence, RI, a book, and a piece of history that gets better with every viewing. David Weinberg‘s name should be familiar as he was recently exhibited in the New England Biennial at Danforth Arts and is currently at the Photographic Resource Center’s NEPR Showcase. David, a physician, left his practice and decided to devote his time to photography, risky business at best. At CDIA I was always impressed with his work, but the work David is currently exhibiting is not to be missed. However, if there is one photographer whose work always excites and holds me captive, it is John Chervinsky. He is local, but that qualifier is irrelevant. From the first time I saw his work to his latest explorations, I stand in awe. John’s day job is as an engineer, working in the field of applied physics at Harvard’s Rowland Institute for Science. He has spent eighteen years running a particle accelerator at Harvard University. John’s photography is all about making pictures with a camera and what happens in that space. The work is about our physical world, what happens in it, and our relation to it. It is about our perceptions of time and space and how they are revealed through photography. Each photographic print you encounter is beautiful, compelling, and intelligent. A perfect meal. Did I mention he is also a hell of a nice guy? Thank you John for enriching my life.

Steven Bogart, theater artist
I’m excited about the artists I’m working with in my latest project, a theater event at Oberon called Interference. I’m working with Boston artists from a variety of genres: an animation artist, a video artist, actors, a Butoh performer, singers, composers, visual artists and writers. We’re using Picasso’s painting Guernica as a catalyst to explore the human condition in the face of terror. We are creating the piece by first responding individually to the subject, then coming together to share what we are each thinking about. This is where the collaboration becomes integral to the development of the piece. We influence each other in unexpected ways. It’s like walking on the edge of a cliff together and finding that moment where we all jump, or we might jump at different times and find each other at serendipitous moments of free fall. It’s a wondrous creative leap of faith. I love taking artistic risks where “failure” can be just as exciting as “success.” These kinds of collaborations keep me in a state of awe and ignorance which I have found to be the most rewarding artistic experiences; I don’t want to understand, I want to be filled with fear and exhilaration.

Rick Ashley is a 2013 Fellow in Photography for the Massachusetts Cultural Council and has shown most recently at Danforth Art’s New England Photography Biennial and the Panopticon Gallery in Boston.

Steven Bogart is a playwright, director, painter, and multi-disciplinary artist. His latest project Interference will be performed February 12, 2014 at OBERON in Cambridge. Read more about him and his work, on ArtSake.

Ariel Freiberg is a painter and the curator of The Country Between Us at the New Art Center in Newton, featuring work by Resa Blatman, Ariel Freiberg, Susan Scott, and Zsuzanna Varga Szegedi (thru 12/20). She’ll have a solo show at Boston University’s Sherman Gallery in 2014.