You are here: Home / artist voices / Cathy Jacobowitz and The One-Way Rain 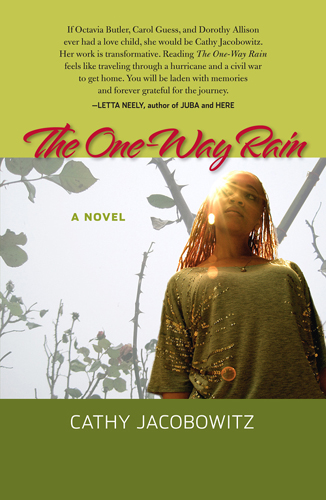 Cathy Jacobowitz‘s novel The One-Way Rain has just been published by Wildheart Press.

Here, the author discusses the book, its title, its journey, and why bookkeeping matches up well with book writing.

Why The One-Way Rain (the title)? Why The One-Way Rain (the book)?
In my novel, a rain that only goes one way is a metaphor for nonviolence, among other things. While not as beautiful, it’s related in my mind to the image used by Martin Luther King, Jr., which I first heard quoted by State Rep. Byron Rushing, during the 2004 gay-marriage debate: “The arc of the moral universe is long, but it bends towards justice.” Of course, all rain goes only one way, i.e., down. So this metaphor may not bear close examination, but I liked the idea of the inevitability of peace, regarded in the extreme long view.

One of my inspirations in writing the book was my love of Hollywood action movies. I get a huge kick out of sitting in a dark theater watching a summer blockbuster, but I’m always frustrated and often enraged by the lack of strong roles for women, and in particular the absence of women action heroes. So I wanted to write something with a female protagonist who could scale walls and fight and pull off heists. In the end I didn’t give Sterling any actual fights to wage – she works by stealth, not confrontation – but she does do a lot more physically than anyone I’ve written about before, I think. Except for the pro baseball player in that one book.

Around the same time I got involved in a neighborhood organization and started meeting a lot of what I call in the book nonprofit types. Partly by way of contrast, I became interested in the idea of the true revolutionary, somebody who’s willing to dedicate her life to a cause in a way that I am not and never will be. After 9/11 I was already conscious that many elements of authoritarianism and corporate control existed in my own government, and then Hurricane Katrina happened and threw those issues into relief against the landscape of racial inequality in the United States. I could pick up the New York Times and see a picture of a corpse floating in floodwater in the middle of a city, but at the same time I was totally protected from that experience. With all that, and given the history and ongoing reality of institutional racism in our country, it made sense to me that my revolutionary character, Lore, would be a Black woman fighting for justice for people of color.

What’s the best day job you’ve ever had?
I really enjoy what I do for a living, which is bookkeeping. Accounting is a tremendously satisfying process for me. I’m self-taught and always learning, and there are parts of accounting which are kind of esoteric and hard to grasp, and that makes me feel like I’m qualifying for a secret society. Also, I find accounting very droll. Before I was on Twitter I had a secret Tumblr, and last year I posted there, “When equity doesn’t roll, I snack.” Which I still think is hilarious, though nobody else does.

Share a surprise twist in the Cathy Jacobowitz story.
Publishing The One-Way Rain is my surprise twist. It astonishes me that I did it. I never, ever thought I would indie-publish; I was very invested in the traditional model. And I do have a publisher, Wildheart Press, so it’s not a fully self-published book, but I did most of the footwork and it was a long haul. It took over a year from making the decision to driving with the owner of the press to Lowell to pick up the books (which weren’t ready so we had to turn around and come home). I feel incredibly blessed to have had the technical help I did, all of which I found around me in people I already knew and loved. But the whole thing has been a huge surprise.

Do you secretly dream of being a) a pop icon, b) an algebra teacher, and/or c) a crime-solver/writer a la Jessica Fletcher?
I’ve always been quite worried about becoming a pop icon. I would be bad at it and I hope it never happens.

Computer, longhand, or typewriter?
Computer, which over the decades has led to a tortured love-hate relationship with Apple.

What are you currently reading?
A great book by Patrick Flanery called Absolution, which sounds like it should be about Ireland but is really about South Africa, political struggle, motherhood and writing. I found it at Boomerang’s in Central Square. The one problem with it is that once in Austin I heard a slam poet recite a poem with the refrain “Who will grant me AB-so-LU-tion?”. It was about getting an abortion, and whenever I look at the book I hear that line.

What’s next?
The next book.

The One-Way Rain is available at cathyjacobowitz.net. A book release party will take place at Haley House Bakery Cafe in Roxbury 9/20, 6-8 PM. RSVP. Read more from the author in the ArtSake article Artists as Presenters.

Cathy Jacobowitz is a longtime novelist, a former bookseller, and a bookkeeper. She lives in Boston with her partner, three cats, and a dog.