You are here: Home / arts business / Artists on How They Get By

On June 4, 2014, a group of artists are convened at Lesley University in Cambridge for an event called How We Get By, about the realities and struggles of artists’ financial lives.

Tim Devin, one of the event organizers and a past guest blogger for ArtSake on copyright issues, has written this guest post about what transpired on June 4 and where the “getting by” conversation is headed next. 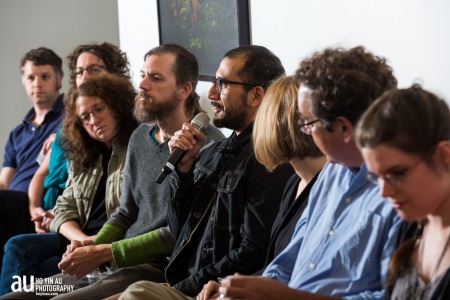 Introduction
How do artists make a living in our increasingly-expensive city? That’s something Jason Pramas, Matt Kaliner, and I started talking about recently. Artists don’t really like to talk about how they make money, since it usually has very little to do with their creative work. They avoid the issue for a variety of reasons, but the largest one is that they want to project an image of being a successful artist, and the current notion of what a successful artist is involves making money from your work.

This situation, of course, creates a number of problems. If you don’t know how other people get by, then you’ll never know about other ways you could be doing it yourself. And since people don’t like to share the fact that they often subsidize their creative work with money earned from day jobs, then it’s never clear how effective the standard grant and gallery systems are at supporting the region’s creative output financially. And perhaps most importantly, it leaves unexamined the assumption that successful art is defined by the revenue it generates.

Jason, Matt and I thought it might be good to get a group of artists get together, and share information on how they get by. We felt that having people speak publicly about this would raise these issues nicely, and get people talking about changes that could be made, and about other ways to get by as an artist in Boston.

We were lucky enough to get a raft of amazing people to speak, each with a different viewpoint and approach to making ends meet. Artists included Andi Sutton, Coelynn McIninch, Dave Ortega, Dirk Adams, Emily Garfield, Greg Cook, Heather Kapplow, and Shea Justice. Two of us organizers, Jason Pramas and myself, also spoke. We also invited Melinda Cross, who is involved in an artist housing coop to talk about that as an option, and Gregory Jenkins, who is the executive director of the Somerville Arts Council. Matt Kaliner moderated the discussion.

Lesley University hosted the event, and almost 100 people came to learn about other ways of getting by. Ho Yin Au and Ellien Laramee-Byers were the photographers. Ironically – or tellingly – since we couldn’t get a budget, everyone involved (photographers, speakers, and us organizers alike) worked as volunteers. 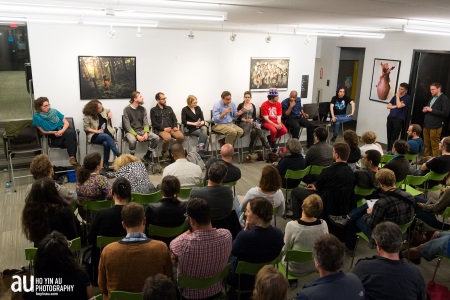 Getting by
The discussion was pretty wide-ranging. One issue that kept coming up was juggling paid work with creative work.

Andi Sutton, who works at a local university, said that she came to terms with the need for a day job early on, and now views herself as having two careers. She said that she is lucky to have an understanding boss, who affords her a certain amount of flexibility when she needs to do something for her art. Far from being a barrier, Shea Justice spoke about working as an art teacher as a benefit to his creative work. He draws energy from his kids, and often goes to museums on field trips. Both talked about the benefits of stable jobs.

But many of us exist in more precarious ways. Dirk Adams, who installs art shows, spoke about how unsteady his jobs are — opportunities often come up at the same time, forcing him to choose one over the others, after long dry spells of no income. He said that having to hustle for paid work draws energy away from his creative work. Heather Kapplow goes through cycles where she works a lot and saves up, and then works freelance sparingly and tries to keep as much of her time for her art. She said that a few scheduled freelance projects fell through recently without much warning, forcing her to make some difficult choices. 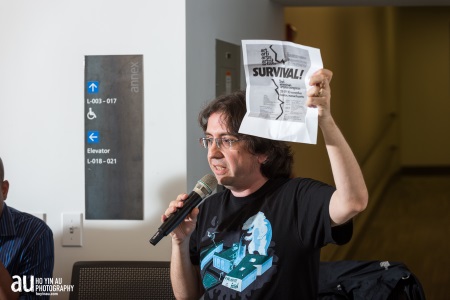 Jason Pramas, who is 47, told us that he had started working at 16, but had only been able to find a steady full-time job for six of those years. I read a statement from an anonymous artist/musician who is lucky enough to own her own two-family house, but can’t afford decent health care on her intermittent income from her creative work and the money she gets from renting her upstairs unit. She worries about what will happen to her as she ages and incurs more medical expenses. 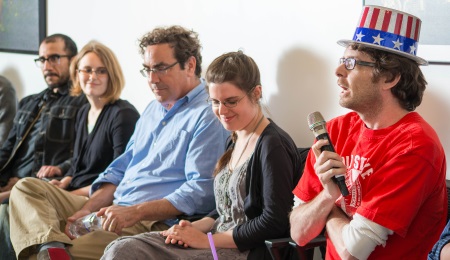 Which touches on one of the central themes of the night: frustration. Frustrations with the economy in general, with the area’s high cost of living, and with the art world. Greg Cook pointed out that so much of the existing art system doesn’t work for you if you have a job. For instance, who can afford to do residencies? They involve traveling somewhere, and not working a paying job for weeks if not months on end, in exchange for space to create but very little financial compensation. Heather Kapplow said that since she does conceptual art, she has difficulty making money off of her work, since there are few mechanisms to support conceptual art financially. Personally, my work has never been a big income-generator, so I tend to make things inexpensively so I can keep doing what I want to do. But I worry what would happen if I wanted to branch out and make other kinds of art — would I be able to afford it?

Other speakers shared how they cope with the high costs of living in the area. Dave Ortega and Greg Cook both talked about personal thrift as a way to get by. For example, Dave spoke of his own “Thoreau-inspired lifestyle” which includes sharing a small apartment, and not owning a car. But the region is consistently listed as one of the most expensive places to live in, and rents keep going up, so these solutions may be only temporary. Dave, who lives in Somerville near the proposed Green Line extension, wondered how much longer he’ll be able to afford living there. Coelynn McIninch suggested people consider Fitchburg as an alternative, and told us about the area’s affordable apartments and studio spaces.

Mutual aid is another good way to cut expenses. Melinda Cross spoke about the two coops she’s involved in: a long-standing residential coop, and a relatively new papermaking coop she formed. Both help participants save money, while at the same time building strong bonds that can be called on when you need support from others. Coelynn told us that she often trades her photography services with other artists when she needs their help. She said you don’t have to be best friends with people you exchange help with, which provides for more exchanges, since you’re not limited by your friendship circles. The audience loved this idea, and during the discussion portion someone floated the idea of a website where artists could offer and exchange services. Jason talked about the need for creative workers to organize in their own political and economic self-interest—pointing to the Boston Visual Artists Union of the 1970s as a relevant historical model. 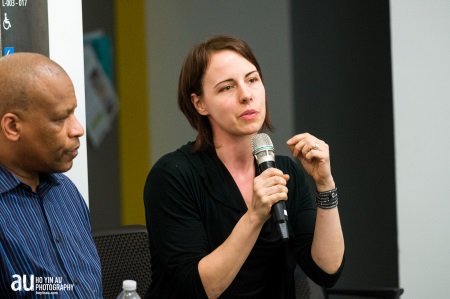 Underlying a lot of these issues is the notion of identity. In a culture where who you are is often gauged by how you earn your keep, this places people who identify as artists but don’t make much money at it in a tricky situation. Coelynn took this issue head on by saying point blank “Never apologize for what you have to do to make your art possible,” a statement that brought on a round of applause — showing that the artists in the room were concerned about validation as much as they were about economics.

Greg Jenkins ended the night by speaking from the perspective of an arts organization. He stressed that artists needed to prove why communities should support them. He pointed out that a lot of this discussion stems from bigger problems – the economy, the recession, the art world. He suggested that artists identify specific problems, and work with arts organizations on solving them; “that’s what we’re here for,” he said.

Conclusion
The night raised a number of issues, the most important being how little money is in the art system right now. A lot of people said that they were both surprised and reassured to learn that so many artists are in the same boat as they are. Many said that they always assumed other artists were doing a lot better financially, and that they themselves just needed to try harder, or catch the right breaks, to make it. Creative people often do things for free to build their CVs, but as we learned, even artists who show internationally don’t really make much money. This is something we might want to reexamine.

The question then becomes: what do we do with all of this information? The day after the event, we organizers set up a group page on Facebook to discuss the event. Over 200 people joined immediately, and started a lively discussion. People shared dozens of articles and thoughts and ideas on how to change things.

This energy led to a second meeting, also at Lesley, on June 25th, to determine if people wanted to start an artist-led organization. Over 40 people showed up, and the 2 ½ hour discussion ranged from reexamining the role of the artist in the community, to talks about alternative economics; from tips on the best way to pressure politicians, to talks about housing and grants, and ideas on alternative venues and ways of reaching people.

A third meeting is being planned for July 16th, to discuss what kind of organization or organizations everyone involved wants to form. There don’t seem to be any hard answers right now — or rather, there are dozens of views about what the problems actually are, so having everyone agree on an answer is moot — but the questions being raised are exciting. While no one questions the support we all get from existing arts organizations, the spirit in the air seems to be that maybe the missing element is something that we artists can do for ourselves, if we band together. Maybe by banding together, we can all figure out another way to get by. 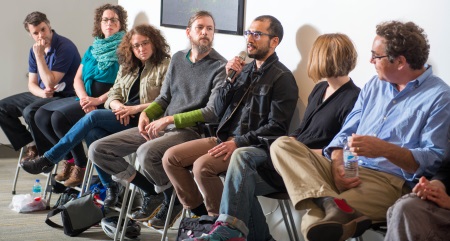 Further research:
How to find funding as a Massachusetts individual artist
What makes for a good day job as an artist?

Tim Devin‘s projects deal with community and social change. His work has been included in art and urbanist shows across the US, Canada, and Europe, and have been featured in such news sources as NPR, CBC and, more locally, the Boston Globe. He’s the chair of the board of the Somerville Arts Council, which is part of MCC’s local cultural council network.