You are here: Home / arts law / Copyright, Appropriation, and Creatives

In May 2011, artists Tim Devin and David Taber organized a conference in Cambridge called Play-Jurisms, exploring the complex thicket of copyright, appropriation, and ethics in the work of contemporary artists. We asked the two collaborators to share their observations from that weekend, which approached the idea of creative property from all angles.

How does copyright really work? How can you protect your creations from being stolen? How much of another person’s work can you include in your own before getting into trouble?

We started talking about appropriation last fall. The more we looked into it, the more interested we became – and the more we learned how complex it was. We figured that other creative people in the area would want to know about these things as well, so we organized Play-Jurisms. The conference took place May 21- 22, 2011, at the Democracy Center in Cambridge. All of the sessions were free, and all of the speakers were volunteers. 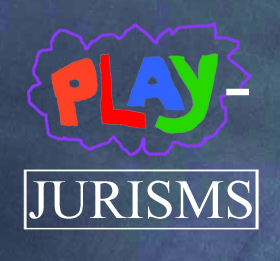 Miguel Danielson, principal at Danielson Legal LLC, began by explaining some basics including what copyright is and how it is enforced. He told us that every expression that “shows a modicum of creativity” and is “expressed on a tangible medium” is automatically copyrighted. The phonebook, for example, is not copyrightable. Even though copyright is an automatic right, if you want to make sure you have undisputed standing in court, it is best to register your work with the US Copyright Office, which costs $35.

Danielson also spoke about legal provisions for fair use. Fair use exceptions to copyright law allow for the use of other peoples’ work for educational purposes; commentary; parody (comedy that mocks the original work – but not satire, which makes broader social statements); or “transformative” uses that create a unique work. One important limit to fair use is that the new use cannot have a “negative market impact” on the original work, he said.

In general, he said, case law does not provide a particularly clear guide for how future copyright disputes will turn out.

Danielson’s presentation is available here. The examples he used are worth checking out – including a case that pitted 2 Live Crew against Roy Orbison, and one involving Demi Moore’s body and Leslie Nielsen’s head. 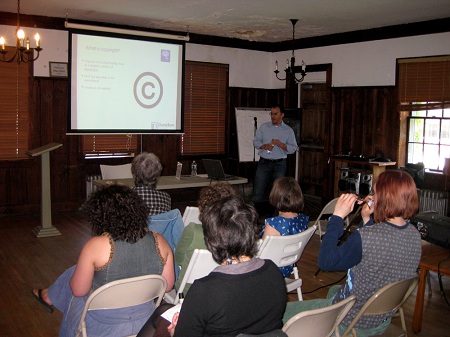 Sheri Mason, who is an associate at Morse Barnes-Brown and Pendleton PC, and is the Director of Legal Services at the Volunteer Lawyers for the Arts, presented next.

Discussing recent trends in copyright law, Mason said the courts have been increasingly tough on people using “fair use” defenses in recent years. In particular, she cited Richard Prince V. Patrick Cariou, in which the court found that Prince’s alterations of Cariou’s photographs were not transformative.

Mason also discussed recent developments in moral rights – rights explicitly offered to visual artists in the United States under the Visual Artists’ Right Act of 1990, and given to other creators to some extent through other laws. Moral rights include the right to be credited and its opposite, the right to publish work anonymously or under a pseudonym. They also include the right to the “integrity” of visual works; that is, the right not to have your work mutilated, distorted, or modified. There are limits to moral rights, however. For example, Mason spoke about a case where landscape design was found to not be copyrightable, and therefore not protected from mutilation.

Mason also discussed Creative Commons – a license that allows others to use your work for free, as long as they agree to certain conditions. (Such conditions could include making the new work available for reuse as well, or not reusing the original work for profit.) Creative Commons works are still copyrighted, but the creator is voluntarily giving up some rights, she said.

Next, we heard from James O’Keefe, the founder of the Massachusetts Pirate Party, a newly formed political party that pushes for copyright-reform and open government.

O’Keefe spoke about how copyright had evolved, and why the way it is now isn’t necessarily the best thing for us. He began by telling us how copyright had been created in Europe to protect religious and political interests, then business interests, rather than individual creators’ rights. He then talked about extensions of copyright that we’ve seen since the early 20th Century in the U.S. – from 14 years to life-of-the-author plus 70 years – pushed for by corporations, particularly one seeking to protect a particular large-eared cartoon character.

O’Keefe made the important point that culture is what has come before, and for culture to move on, we must build on that past. As copyright bars more and more uses of previously created material, it bars what forms culture can take. (Here’s O’Keefe’s presentation.) 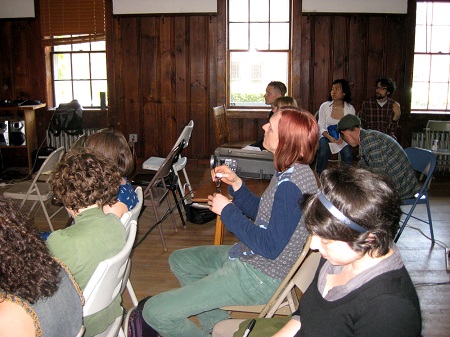 We finished up the first day by watching Craig Baldwin’s documentary Sonic Outlaws. This film explores the legal issues around Negativland‘s parody of U2 and Casey Casem. It also included a number of interviews and short vignettes about other copyright-questioning artists such as John Oswald and the Barbie Liberation Organization.

The next day started with Don Schaefer, an artist and artists’ rights advocate. He is part of the Massachusetts Artists Leaders Coalition and is the founder of Pro-Imaging, an international group aimed at promoting artists’ rights.

Schaefer argued in favor of copyright, saying that while its current iteration is a “bad performance,” protection is necessary to ensure that creative people are reimbursed for their time and effort. “We live in a predatory culture,” he said. “There’s no reason for us to be predatory towards each other.”

Schaefer recommended that people collaborate, instead of appropriating from each other; besides being a legal alternative to appropriation, collaboration helps build community, and can lead to further creative opportunities.

After Schaefer, we had a panel discussion about appropriation. On the panel were Danny Mekonnen, Dirk Adams, and Alana Kumbier.

Mekonnen, founder of the Debo Band, a local Ethiopian group, discussed the ethics of cultural appropriation. Mekonnen, himself an Ethiopian-American, spoke of appropriation as being a potentially meaningful exchange and bridge between cultures. During his career, he has worked with a number of Ethiopian musicians here and in Ethiopia. His group has covered their songs, and given them credit. Part of the importance of his work, he said, involves giving recognition and credit to older artists; he also believes in educating his audience about Ethiopian culture.

In his opinion, talk about appropriation as all-or-nothing isn’t right – the reality is more nuanced. Borrowing is fine, but hiding where you borrowed it from is problematic. (Mekonnen explores this idea further in this article.) 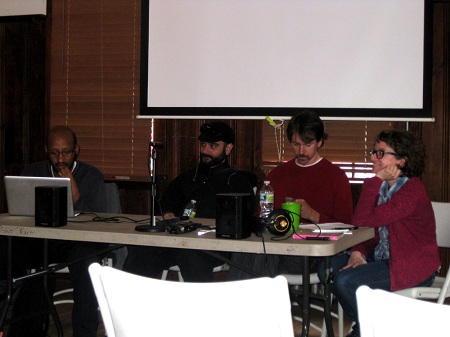 Dirk Adams spoke next. Adams is a performance and sound artist, and is also half of the multimedia group Gang Clan Mafia. He said we live in a pervasive information culture, where media has become part of our language. Since this is our culture, it doesn’t make sense to not refer to that culture in creative work. He uses snippets of pop culture to tell stories and create sensations through his work, which he wouldn’t be able to do without appropriating those snippets.

The third panelist was queer burlesque performer and zine-maker Alana Kumbier. Kumbier told us about a zine she edited called “Because the Boss belongs to us” and a cabaret show she’d put together called “Queers Do the Boss.” During the cabaret event, performers did imaginative interpretations of Bruce Springsteen songs. The zine told stories about Springsteen’s influence in the writers’ lives. Kumbier viewed the event (and book) as commentary and social satire, and therefore completely defensible. She said being able to freely discuss and interpret the work of iconic cultural figures who have influenced us is important for self-expression and self-understanding.

The panel raised a number of interesting issues. For instance, do the ethics of appropriation change if the performer is or isn’t making money? Second, there are two ways to reimburse the original creator – through a change of money, and through attribution, which helps get the original creators’ name and work out to a larger audience? In recent history, being reimbursed with money has been the primary goal – but is money really more important than attribution?

After the panel, we had a workshop by Heather McCann and Alana Kumbier. McCann and Kumbier are both librarians, and are part of Boston Radical Reference, a group of librarians who offer their help for free to cultural and left-leaning groups. For Play-Jurisms, they had created an online reference guide listing sites that had legal, free sound, video, and images that creatives can use. 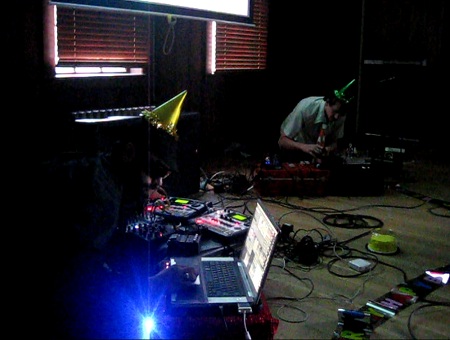 After a short break, we had some free food, and then saw two performances. The first was by Gang Clan Mafia, who performed their new piece, created for the event, called “Gang Clan Mafia Sing Happy Birthday to You, Pac Man.” The piece involved sampled and sequenced sound snipped, as well as video and performance actions.

Factory Seconds, a Somerville-based brass band, closed out the weekend. Dressed in their teal-and-black colors, they played fun and imaginative interpretations of familiar tunes. 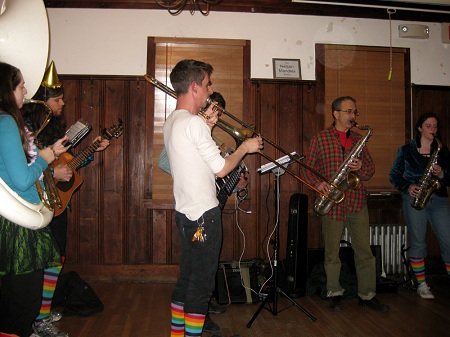 Tim Devin is a Somerville-based artist. His projects have involved community, public space, books, zines, maps, walking tours, and giving things away for free. Tim is a member of the Rise Industries art group, and is on the board of the Somerville Arts Council.

David Taber lives in Somerville, plays low-brass for the Factory Seconds, occasionally writes zines, and thinks much about politics, culture, how to write fiction. Full time, he is a reporter at a newspaper in Boston.

All images courtesy of Tim Devin and David Taber.