You are here: Home / artist to artist / Work You’ve Set Aside Part Two 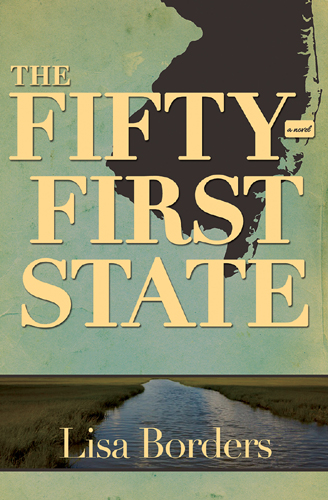 We asked a variety of artists: If you’ve ever had to set aside a work of art that still had potential, why did you do so? And will you ever return to it?

This is part two of the discussion. Read part one.

Lisa Borders, novelist
Both of my first two novels (Cloud Cuckoo Land and The Fifty-First State) began with a voice, a character. The overall narrative voice was not always that first voice I’d heard, but in both cases it felt like the novel’s voice grew organically from the initial character.

I was surprised, then, when ideas for what I thought would be my third novel came to me more in terms of plot than voice or character. I saw a middle-aged woman flee her South Boston home in the middle of a snowstorm and drive to Florida. I saw her interact with the Floridians who would change her life: a transgender teenager, an elderly man with a criminal past. Where I’d suffered through many revisions to discover the plot in my first two novels, the entire plot of this novel revealed itself to me before I’d put a word on paper. I thought the book would write itself.

And then began the struggle. Not only wasn’t the book writing itself, I couldn’t even get a decent scene on the page. Oh, I tried: I wrote a scene in third person from the point of view of the middle-aged woman character; then that same scene in first person. I shifted to the teenager’s point of view, trying both first and third person. I attempted an omniscient voice. I even tried the point of view of a minor character. I spent the better part of a year trying to get a voice working for this novel, but the words never flowed; the characters never came to life.

Eventually I decided I needed to move on to another project. Yet, I still think of that situation, those characters, from time to time. And I hope that one day, I’ll hear a voice that allows me entrée into their world.

Evan Johnson, composer
Until recently, I never put aside a piece temporarily, never worked on more than one project at a time, and never revisited a completed work for revision. I brooked no distraction because I felt that I needed to be able to keep an entire work in my mind at once in order to interact with it successfully – to remember where each line of thought left off so that I could pick it up smoothly and without contradicting my original intentions.

These days, I have lost interest in avoiding contradictions. I find myself – even during uninterrupted periods of work on one piece – taking tangents, following half-finished material in directions I did not initially intend, ignoring plans I remember perfectly well. I have forgotten why I ever felt that the final state of a work needed to reflect as closely as possible the idea with which it began. It is no coincidence that, in the past year, I have put aside a work in progress only to declare it complete in its ostensibly truncated state, and picked up another for revision a year and a half after its original completion.

Timothy Coleman, furniture maker
My pieces begin as hazy visions, and the process to bring them to life can take months.

Twenty years ago I had one of these visions, something shapely and sculpted from thick pieces of wood. I made a small model to help focus the vision, and began a search for the right material. Weeks went by before I discovered some thick slabs of European beech that suited the refined shaping of the piece. I was all set to go.

But, when I began milling and shaping the wood it would not stay still. It wasn’t fully dry and it would cup and twist in response to the shapes I was cutting. I was so eager to build this piece, so excited to chase the vision, but I could not force it. Dejected, I put the parts away and instead used the time to build a less ambitious piece.

I still have the parts, and every once in a while I pull them out and try to recapture that original vision. But the freshness is lost.

The scale model sits on a shelf in the studio. I look at it, and I narrow my eyes. It looks life-sized and almost feels like I did build it. Maybe that’s enough. 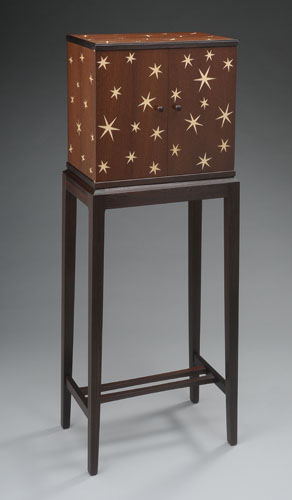 Lisa Borders is the author of the novels Cloud Cuckoo Land and The Fifty-First State. The latter will be published October 15, 2013 by Engine Books. She has upcoming events/readings at Newtonville Books (10/15), The Boston Book Festival (10/19), Trident Booksellers and Cafe (with Kim Triedman, 10/22), Books on the Square (with Henriette Lazaridis Power, 10/26), Mattapoisett Free Public Library (10/30), and Harvard Bookstore (11/4).

Timothy Coleman‘s new cabinet “Summer” is featured at the Society of Arts and Crafts on Newbury Street in Creative Minds, Disciplined Hands (thru 10/19). His work “Yew and Me” is at the Fuller Craft Museum in Made in Massachusetts: Studio Furniture of the Bay State, part of the Four Centuries of Massachusetts Furniture project.

Evan Johnson‘s composition “die bewegung der augen” for nine instruments will be performed by Ensemble Dal Niente at the Fromm Concert Series at Harvard (2/28/14), and his “Largo calligrafico / ‘patientiam’ ” for baritone saxophone, featuring Ryan Muncy, sax, will be performed at Boston Conservatory (3/27/14).