You are here: Home / archival image / White House Canine Sculpture Made With Pennies 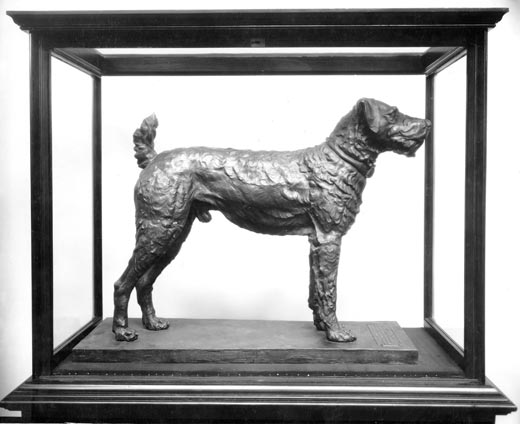 Image above not to be confused with any Damian Hurst sculptures. No living animal was used or co-opted as actual sculptural material.

Once upon a time, when Warren G. Harding was president, there living in the White House among the hordes of press photographers, visiting dignitaries, and well-heeled lobbyists, was a celebrity born with four legs, two ears, and a permanent fur coat. This celebrity had a specially designed hand-carved chair in order to attend all cabinet meetings. This celebrity held interviews with the press. This celebrity was none other than Laddie Boy, the very first White House celebrity canine, who freely roamed the grounds of the Rose Garden to do what dogs do best. So beloved was Laddie Boy by the American public that, in honor of Harding’s death, a life-sized sculpture of Laddie Boy was created thanks to more than 19,000 donated pennies from members of the Roosevelt Newsboys’ Association (apparently girls were not permitted to deliver papers at the time). The woman who created the piece from the melted down pennies was a Boston sculptor named Bashka Paeff. At the time, she was also known as the “subway sculptor” for her work at the Park Street T station. You can see one of her lovely bronze works Boy and Bird Fountain in the Frederick Law Olmsted designed Public Garden.

Paeff, who attended the Museum School (it is rumored she spent very little time hanging out in the Atrium), also created a World War I memorial that ticked off the governor of Maine. In fact, he found it so repugnant for its overt pacifist tendencies, that he refused to allow public funds to complete the sculpture. See for yourself the offending work called Sacrifices of War, 1925.

By the way, if you are an artist considering entering the field of public art, you should know about the magnificent local resource, the UrbanArts Institute at Massachusetts College of Art and Design.