You are here: Home / artist to artist / Where Does a Work of Art Start for You? 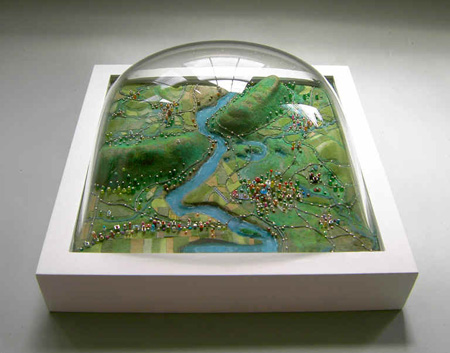 A work of art is a world in itself. But it has to start somewhere – be it an idea, a tune, an image, a memory…

We asked a group of artists in different disciplines: Where does a work of art start for you?

Liz Duffy Adams, playwright
My plays start with a landscape. Most of them take place outdoors, and even in those that are set in a room, I need the sense of the wider landscape outside. Dog Act began with looking out of a train window at a wintry marshland, and imagining a small group of people toiling over it in the distance. Or, began to take shape for me when I read a description of Restoration era London looking post-apocalyptic after the Great Fire. A Discourse of the Wonders of the Invisible World began with the physical realities of the New England landscape – a landscape I know well – in a time before electricity, when the night was terrible and dark. Going just a bit further, I’ve become aware that all my plays, however different they seem, are interested in the question of how to recreate human civilization in disastrous times. Which is kind of a big-picture landscape question.

It’s so important to begin, yet most of that beginning work doesn’t end up in the piece. Though I suppose indirectly it does; idea A gets scratched, but somehow leads to idea B which is revised due to idea C, etc.

Sally Curcio, mixed media artist
A work of art begins with concentrating on a theme for a whole body of work. Ultimately the concept dictates the medium, and the subject matter develops from a combination of ideas that are percolating in my mind at a particular point in time.

My inspiration for my latest body of work Bubble emerged from disparate sources: the saccharin and romantic work of Thomas Kinkade and whimsical content and form of snow globes. My sculptures capture the idyllic safeness of Kinkade’s cottages, and the nostalgia and quirkiness of snow globes. I use materials such as pins, beads, eyelashes, tennis balls, shuttlecocks, and make-up application pads to create miniature worlds rendered in 12” by 12” squares enclosed under acrylic bubbles. By using these materials I invite the viewer to summon childhood fantasies when imagination enveloped play with toys and found objects.

My wish is to offer a dream of a safe protected environment during this time of economic, political and environmental uncertainty. In a moment in history when we seem to be on the cusp of abandoning one kind of world and groping to create another, the work hopes to counsel openness to what may be possible.

James Heflin, poet
I don’t consider myself a “realist,” though I try to treat absurd premises as if they were real, even ordinary. Most of my poems arise from an unusual question or potential circumstance – what if you could haunt yourself? What if a feral yet talented choir hit town? If “a” happens, then what is the “b?”

Despite seeing that trend in retrospect, I still find starting a poem a blind leap. I try to eavesdrop on the flood of thoughts whanging around the braincase and take note. Usually, something leaps onto the page, often something I hadn’t consciously thought about until right then. I have my “if.” (I’m not sure why, but that’s the nature of these thoughts.) The poem unspools as the “then,” the realistic ramification of the unreal or unusual.

On a rare day, a premise is fruitful for more exploration. That’s what recently led to a series of letters from a muckety-muck in a secret society clumsily but earnestly advising a neophyte in the search for esoteric knowledge. It’s harder to continue such a planned premise without more frequent misfires — I end up with more keepers when I let the stuff spill out as it will.

Jared Katsiane, filmmaker
The origins of my films often start from a location and striking image combined with a theme I wish to explore, often based on true-to-life stories. For example, my newest film Big Willow focuses on an old, towering willow tree under threat from construction, and a young artist I know who drew inspiration from sitting under the tree while sketching. Similarly, Houna & Manny began with hearing the struggles of immigrant friends and their appointments at the JFK Federal Building’s immigration office. The film’s sole location is the plaza in front of the entrance to the building, with a recurring image of the doors from the point of view of the characters waiting for their parents. When starting this film, the image of the doors – as a barrier to the stories behind them – is what set me on the path to create a story on the plaza.

Elizabeth Whyte Schulze, fiber artist
In creating my recent tumbler series, I was interested in working with smaller cylinder shapes as a way of making multiple baskets. My objective was to have many opportunities for experimentation in and out of the basket surface. Each cylinder has a female figure confronting her environment. My piece entitled In The Cave was made up of five cylinders of different heights and widths. Each tumbler in this group of five depicts a female figure or a group of women looking at paintings of horses, bison and bulls romping across the Paleolithic cave wall. In 1996, I was granted a rare opportunity to visit Lascaux and it continues to inspire and inform my art. 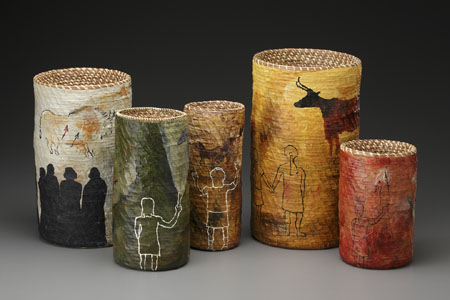 Liz Duffy Adams‘s play A DISCOURSE ON THE WONDERS OF THE INVISIBLE WORLD is premiering at the Contemporary American Theater Festival in Shepherdstown WV, July 3–28. Read about it.

Lou Bunk directs the Opensound series in Somerville and co-directs Collide-O-Scope Music. His piece “Being and Becoming” for toy piano and electronics will be released on a CD through Innova Recordings, late 2013/early 2014.

Sally Curcio‘s Bubble worlds are on exhibition for the summer season at the Harmon Gallery, Wellfleet, MA.

James Heflin is a writer and musician and arts editor of the Valley Advocate. Read an article about him in the Greenfield Recorder.

Jared Katsiane is an award-winning filmmaker who teaches youth filmmaking in the same public housing development where he grew up in Boston.

Elizabeth Whyte Schulze has work in Celebrating the Art of Sculpture, at the Barn Workshop in Danvers through September 13th.