You are here: Home / artist to artist / Unexpected Journeys in Art 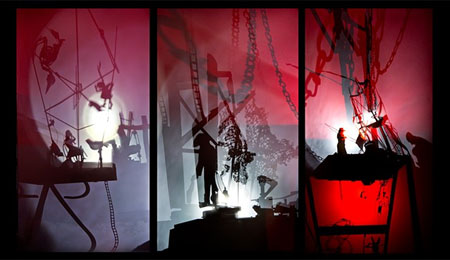 As an artist, where you intend to go at the outset of a new work isn’t always where you end up. You may start with an idea but in realizing it be led into surprising, even bewildering territory.

We asked artists in different disciplines: “What’s the most unexpected journey your art has taken?”

Marguerite White, drawing and mixed media artist
In 2006 I was commissioned to make a public piece for the AHa Festival in New Bedford. I fell in love with a condemned building on the State Pier and proposed an elegant and complex wall drawing involving ethereal white wash images and shadows projected like Batman signals. I imagined a serene ghostly “event” – quiet, understated. I hadn’t taken into account the siding – lichen encrusted, corrugated asbestos – (almost) nothing would stick on top of the distorted surface. Then there was the rogues gallery of onlookers. I needed a new plan.

I ended up mounting steel silhouettes and halogen lights in front – the sundown would push shadows across the wall. I bought a used copy of the Rime of the Ancient Mariner and a case of spray paint. I snapped chalk lines across the curvy surface; I called my little brother for tips on “can control.” I only blew the fuses in the fish house once.

Ensuing weeks of rain and wind had me fairly unhinged. I recounted the mariner’s story to anyone who asked; men from Parks and Rec on rider mowers, truckers waiting for loads of scallops, stoned fishermen, confused tourists – they all dug it – my unplanned introduction to performance art.

Mary Jane Doherty, filmmaker
In 2007 I had an idea: to film one high school class in Cuba’s world famous National Ballet School from their auditions to their graduation three years later. And, I’d focus exclusively on pure imagery and ambient sound, material that could not be translated into words.

Good. Over the course of twenty trips to Cuba my central characters emerge, my lyrical poem unfolds. Eventually, I followed the top students to South Africa, Italy and, finally to Toronto for their exhibitions. Not much happened in Toronto, so I dashed down to Havana ahead of the students so I could film their arrival and thus have an ending to my film poem.

At the airport, I’m glommed on to my viewfinder as usual while “my” teenagers file through the arrivals door. The arrivals door shuts and I realize, with a sudden full body rush of adrenalin, that Mayara – my main character, my shy, enigmatic star dancer – Mayara is not here.

It turns out, no Cuban high school student has defected to the US before. And, just like that, my film shifts from a serene poem to a full blown drama, the stuff fiction filmmakers dream about.

Patricia Stacey, writer
E.M. Forester famously asked, “How do I know what I think until I see what I say?” The notion that we really don’t know ourselves exactly, completely, until we begin to create art, is one of the guiding principles that keeps me working and keeps me confident that the emptiness of the pages is a promise and not a threat. Lao Tzu says that the part of the bowl that is most valuable to us is the part that is empty. Every time we move toward filling that blank space, we are moving both toward what we know and away from what we know. Writing for me is like dreaming. I wake up afterwards and wonder what happened and who made it happen; all of it is unexpected. One day, while I was teaching some Jr. high students how to use random characters and objects to create a story, I pulled two words out of a hat: hair dresser and razor, and in the moment two characters came into being, a gay man and his lover who liked to shave people before he made love to them. The novel that followed turned into an exploration into my past in ways I never would have imagined. I wrote about the Mexican cities my mother took me to when I was very young, obsession and the inability we lovers have of reaching our passionate objects, which like the horizon, have a way of melting backwards. I wrote about cowboys, chaparral near the ocean, a hacienda, and bath houses. The story turned out to be a quilt of me. But when I stepped back, it was a pattern that was wholly new.

Michael Mack, poet, playwright, and performer
Neither my art nor my life feel entirely “true” to me unless I find in them something surprising, risky, and strangely beautiful. This has been true in the writing of my solo play Conversations with My Molester: A Journey of Faith, which explores a darkness that has haunted me since I was a child. The play opens with me as a boy being raised in a devout Catholic family, and dreaming of becoming a priest to fully participate in the mysteries of the faith. That dream ended at age 11 when my pastor invited me to the rectory to help him with what he called “a project.” In the decades following his trespass, I felt deeply estranged – both from the Church and from myself. But by writing this play – which I experienced as an act of spiritual truth-telling – I rediscovered what is still luminous and beautiful about the Church, while also revealing what is so very human. As I brought this story to page and stage as a lyric drama, I was surprised to find myself reclaiming the Church as my own – life imitating art imitating life in all its mystery.

Michael Mack is the writer/performer of the one-man show Conversations with My Molester: A Journey of Faith.

Patricia Stacey is author of The Boy Who Loved Windows.

Marguerite White is among the artists in New Bedford Harbor in a New Light at the New Bedford Art Museum (5/6-8/22, opening reception Sat. May 11, 3-6 PM).