Steven Barkhimer‘s play Windowmen is about to open at Boston Playwrights’ Theatre, running October 31-November 24, 2013. Here, he traces the play’s history, weaving through dramatic moments from his real life. 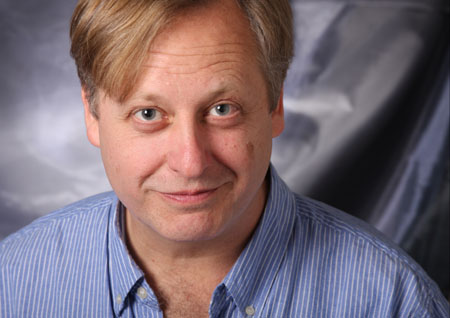 What writer doesn’t hope to be “original?” It was no doubt in this hope that I wrote many a piece, often grounded in actual experience, but magically transformed into Art by careful selection and restructuring of events, aiming for the elemental and padding it with trenchant observations and clever repartee. Until one day, faced with a deadline for a playwriting class and an embarrassing lack of “original” ideas, I deigned to fall back the old enjoinder to Write What You Know.

For years I’d been telling anecdotes about one of my very first jobs after college, a stint as a “windowman” – basically a clerical position, but a rather unusual one – at the Fulton Market right beneath the Brooklyn Bridge. Yes, with a head full of Great Books and untutored in the ways of the world, I had stumbled into a position that treated me to a host of colorful characters. Truly I was a fish out of water, a pasty-faced philosopher thrust into the rough-and-tumble of commerce as lively as the stock exchange, and with an air of glamorous danger to boot. I didn’t know what I would do with the scene I wrote, but it was very funny and lively and I determined to write another installment for the following class.

The most difficult part for me (so far) was watching these anecdotes unfold and wondering if there ached to be a “story” in there somewhere. Naturally, it wasn’t long before I was condensing events and collapsing three actual characters into one fictional one, etc. And – something I’d never really thought about much – it seemed the young man, my proxy in the story, was finding not only a surrogate brother and unlikely friend in his workmate, but a sort of surrogate father in his stern and demanding boss. I worried that I was writing yet another coming-of-age story. I feared that it might morph into something that was predictable and edifying or, possibly worse, into some lament for lost innocence. I had to find a way of making it a play rather than a series of funny scenes, and in imagining some situations having gone to extremes, I tried to find a narrative to hang the whole thing on, and hope I have succeeded somewhat.

Kate Snodgrass at the Boston Playwrights Theatre prodded me into finishing it (“I’d like to produce it; however, that means you have to actually write it!”), and the SpeakEasy Stage granted the play a reading at the “warm-up” lap of the Boston Theatre Marathon that was very encouraging. Terrific actors came to the auditions and callbacks and gave many wonderful and varied reads of the characters; it wasn’t always easy to come up with final decisions. I’m thrilled to have Brett Marks directing it and thankfully he really likes the piece. I had hoped to be more actively engaged in the rehearsal process until a sudden medical emergency took me away. So I am doubly excited to see how this talented group of artists brings this play to life without my nagging “interference!”

Steven Barkhimer is a graduate of the Playwriting Program at Boston University. He co-created the theatrical miniseries Blood Rose Rising and wrote the short play, A Hard Rain, which earned the Cauble Award for Best Short Play of 2009 at the Kennedy Center American College Theatre Festival. A 2011 Massachusetts Cultural Council Artist Fellow in Dramatic Writing, he is also a director, actor, musician, and instructor.