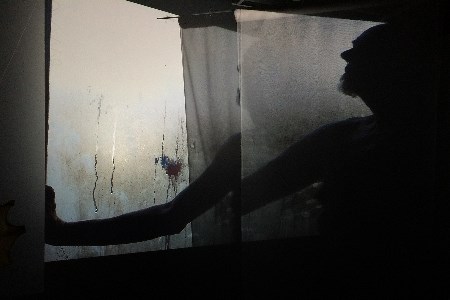 Sarah Bliss: We bring to our work together a deeply shared interest in the human body as starting point. Both the visible outer body and the inner, subjective experience of one’s body have long been sources of inspiration, imagery and mystery for both of us. My own experience as a mover very much informs my art practice. I need my body to be physically engaged in my work, which drives the way I approach my filmmaking. We knew from the start that bodies would be central to the project, and decided to focus on aging bodies, which are rarely seen and often taboo.

Roz Driscoll: My work has derived its imagery and materials from my experience of my body, but the body has also become the medium through which I want people to experience my work. For the last few decades I’ve explored tactile, proprioceptive, visceral perception as a basis for my sculpture, making sculptures that people can touch, as well as sculptures that speak to people’s proprioceptive, visceral selves. This is the first time I’ve constructed an entire multisensory, immersive environment animated by moving images and by visitors’ movements within the environment.

Sarah: Yes and likewise, the awareness of place, and its conscious engagement for embodied encounter is a central concern of mine. I create moving image installations that engage site-specific architecture, where space and place are used as central metaphoric and narrative elements. For instance, I’ve projected the moving body onto the massive scaffolding of a bridge-under-construction, and into the extremely cramped space of a miniature stainless steel elevator. 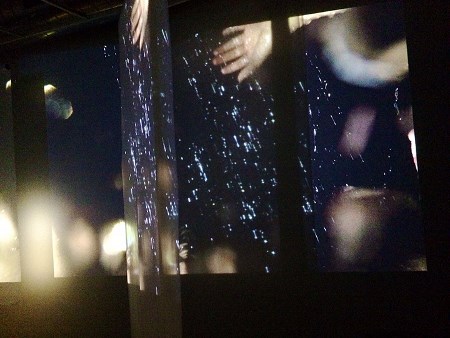 Roz: We also both shared a desire to work with water—to explore its nature, behavior and life-sustaining qualities. You’d already been experimenting with filming bodies underwater, using an underwater camera housing and an underwater light. When we started work on Blindsight, research of ritual uses of water revealed that sauna, which compresses the elements of steam, fire, water and bodies into a small room, is traditionally considered a ritual cleansing. We ended up filming in a small steam room (another tiny, compressed space filled with water and steam that intensified the feeling of intimacy and internality), and underwater in fast-moving streams beneath ice.

I became intrigued with the physical, psychological power of these small, contained spaces as a way to imagine the structure of the installation. The obscurity of the steam room suggested being lost and wandering in the dark, which crystallized for me into the idea of a maze. The concept of maze suggested the Daedalus/Icarus myth, which offered us a narrative line as well as a physical structure for the installation. 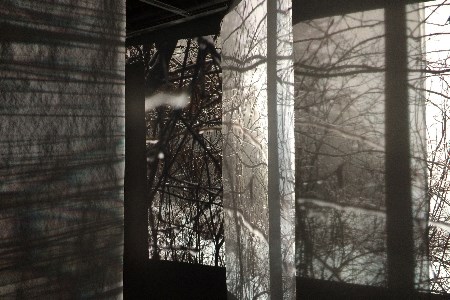 Sarah: I’ve long grappled with the question of how to make meaning in the absence of a shared cultural story, religious framework or mythology. How do we face and embrace aging, loss, death, entrapment, destruction? Can we face the apocalypse of climate change without denial, and without collapse? For me, the answers lie in community and connection, and the creative act.

So I drew from a rich world of visual and cultural referents: early WWII-era paintings by Phillip Guston that depict troupes of street kids reenacting their world at war using the detritus of back alleys; filmmaker Bela Tarr’s remarkable opening scene in Werckmeister Harmonies, in which a young man injects possibility and meaning into listless has-beens in a barren bar, catalyzing them to co-create with him a literal dance of the spheres; the masks and costumes adopted by Carnival-goers as memento mori in medieval times; and Diane Arbus’ unsettling photographs of developmentally disabled people promenading in masks on Halloween.

We wanted to create an encounter with these elemental forces of Eros and Thanatos that was not fully tamed — still wild, raw, mysterious and sensual. It was also important to us to give people enough space to enter the risk of encounter. We needed to find ways they could modulate their distance. 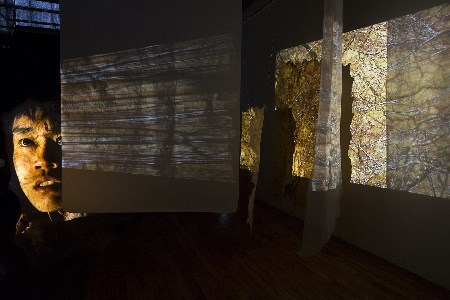 Roz: By designing the installation as a loose maze, we could invite people to enter into the experience, take a journey, find their way and choose their path. Like a labyrinth, there is a center, but with many ways to move around it. We also wanted to contrast the ephemeral evanescence of film with concrete, palpable matter, so we searched for materials to bridge those two poles.

My favorite material is rawhide cow skins. Their capacity to both reflect and transmit light is what originally led me to incorporate moving images into my work. In this project, the use of the skins as receptive surfaces resonates with the rich variety of human skin in the film — skin of various ages, genders, colors and textures, skin with many sorts of markings, and skin that both hides and reveals the being inside. The rawhide skins underscore the film’s themes of death and transformation, and hint at the presence of the Minotaur. We also explored other reflective, translucent materials, such as various kinds of cloth, paper, and metal, to see how they would interact with the projected images.

Sarah: Wanting to break the constraints of standard projection screens, and its collusion in turning the viewer into a passive observer, we experimented with projections onto and through these materials, from various angles and heights. The tension between the integrity and legibility of the moving image and its transformation and abstraction by the materials and angles of projection became a source of joy and wonder as we played. We thrilled to the many ways that the physical architecture of the installation created opportunities for new kinds of engagement with people’s bodies, and for new perceptual practices.

Roz: Right. We wanted to create an experience for visitors that would speak to the somatic, haptic dimensions of their perception—the way we sense with our bodies and respond empathically and viscerally to what we see. We wanted to create a range of sensory possibilities and to stimulate people’s perceptual powers. We wanted to reveal how context determines what we perceive — how the same image appears radically different on rippling cloth, wrinkled rawhide, hanging vellum or a flat wall; when seen from different sides, angles or perspectives; or when seen in changing relationship to other moving images, spaces or materials.

Sarah: That said, we sometimes felt trapped in a maze of our own making. The challenges of filming multiple bodies enveloped in fog and steam in a tiny, dark space in complex lighting conditions, and filming in fast-moving water under ice, along with the challenges that inherently arise in any collaborative venture, amplified that feeling of being trapped in a maze, and mirrored for us the narrative that we were seeking to express. We found ourselves actors in our own story.

In addition, I wanted the choreography of bodies in the film shoots to continue and extend into a choreographic dance between the four projections in the installation. This required development of a software and hardware system that could implement the finely tuned choices we made concerning rhythm, pacing, convergence, emphasis, singularity and focus. Arcs of movement, gestures, forms, and color move from one projection to another, appearing and disappearing like dancers throughout the installation. We were very fortunate to work with the highly skilled artist and software designer, Jeff Warmouth, to develop and program a hardware and software system that could meet our needs.

Roz: Throughout the project, we explored the territory between visual and tactile (optical and haptic) perception: in the film shoots, in the editing process, in the projections, and in the installation materials and structure. The film shoots, for example, were intensely physical and haptic as you moved with the actors and I moved with the light. The imagery then became optical when footage was transferred and compartmentalized onto the flat computer screen for editing. It was a revelation when you realized that the editing process could only be accomplished by projecting the images onto the materials and spaces of the maze, thus returning the imagery to hapticity and tangibility. 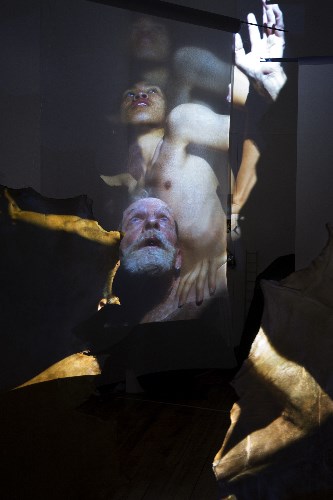 Sarah: It’s interesting too, to reflect on our different relationships to narrative. We felt tension between the desire to create a coherent experience and the desire for an open, polymorphous container for the work. Between literality and abstraction. The choice of the flight and fall of Icarus as our narrative inspiration provided rich interpersonal themes as well as a metaphor for the cycles of creativity, dissolution, death and rebirth that informed all stages of the filming, editing and projection. That narrative arc also became a metaphor for our own creative and collaborative processes, for the ways we work through the differences in our respective disciplines, temperaments and aesthetic intents.

Roz: In the end, the materials, structure and imagery of the installation — the maze — became a place to be inhabited by the two of us, by the filmed figures, and by visitors to the installation, a place both dream-like and substantial—underworld, inner world, and the world itself. The maze invites an experience of wandering, losing one’s way, and encountering unexpected revelations, just as we did in our collaborative creative process. We hope the metaphor enables visitors to the installation to undergo their own liminal, transformative experiences.

Blindsight is on view at Boston Sculptors Gallery thru 7/19. Read a glowing review in the Boston Globe.

Rosalyn Driscoll explores the dynamic relations between sight, touch and the body. Her work has received awards from the New England Foundation for the Arts, Massachusetts Cultural Council, Dartington Hall Trust, UK, and Wurlitzer Foundation of New Mexico. She is a member of Sensory Sites, an international collective in London, and has been a member of Boston Sculptors Gallery since 2008.