Here, Rosanna Yamagiwa Alfaro (Playwriting Fellow ’11) traces her play Before I Leave You from its inspiration, to its challenges, to its culmination in this month’s premiere (October 14-November 13, 2011) at The Wimberly Theatre in the Calderwood Pavilion at the Boston Center for the Arts, produced by the Huntington Theatre Company. 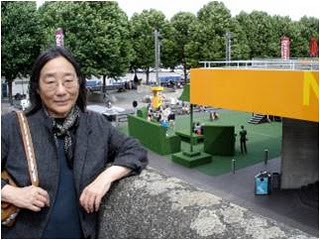 My play, Before I Leave You, began 10 years ago with an inexplicable tumble in my kitchen. I began to lift a heavy skillet from the stove and suddenly fell backwards onto the floor. For no real reason I thought this was the beginning of the end. Four of my five characters are on the cusp of old age. As one of them says, “One day you’re in good health, the next – who knows? You hear of someone having his hips replaced or his arteries reamed, and you say to yourself, ‘Well, he’s seventy.’ And then you think, in a few years I’ll be seventy.” There have been many mid-life crisis plays, many coming of age plays. I wanted to write a coming of old age play.

The four characters in my play range in age from 58 to 65, the time of life when one is alert to any sign that one’s physical and mental powers might be failing. All four are lifelong friends – they dine together regularly at the Royal East, a Chinese restaurant in Cambridge; they drop in unannounced at each other’s houses; they each try their hand at parenting the fifth character in the play, an angry boarding school dropout. I wanted to see what happens when a serious illness strikes one of the group – do they remain steadfast, or is it time to run away? 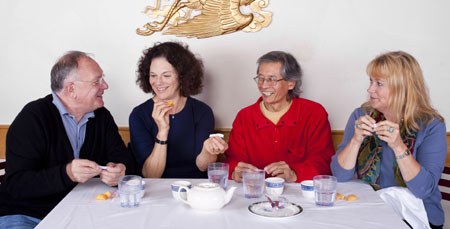 I soon decided I wanted to set Before I Leave You in Cambridge, the place I have spent 46 years of my life. My other plays have been set as far afield as Amsterdam, Mexico City, Mount Olympus, and an imaginary dictatorship in Latin America, but I thought it was high time to write about my own city, teeming with college students, but also inhabited by vigorous elders, whose passions, both personal and professional, still run deep.

I wanted to capture the diverse community of Harvard Square: Jeremy, a professor and novelist, is the one who takes the tumble; Koji, a professor and theater director, suddenly rediscovers his Asian roots; Peter, the boarding school dropout, has found romance with the Vietnamese checkout girl at Shaw’s; and Emily, an artist, Koji’s wife and Peter’s mother, is the still point of this spinning world. My challenge was to create recognizable Harvard Square types – accomplished, neurotic, and opinionated, but each with their own unique and keenly felt problems, based as they are on people (including myself) I’ve known for a very long time.

As I write this, the rehearsal space has just changed from a large, cold, windowless warehouse room on Huntington Avenue to the warm comfortable Wimberly Theater in the Calderwood Pavilion at the BCA. Tech rehearsals have begun. Suddenly everyone is in costume, the three sliding palettes (Jeremy’s study, Koji and Emily’s living room, and the Royal East) are taking turns at center stage in an amazing set bordered by back-lit bookshelves. It seems incredible that we are about to open for previews in three days!

I gathered notes (and scenes) for Before I Leave You for four years, then I worked on it at the PlayPen in Central Square Theatre, where it had its first public reading, and at the Huntington Playwriting Fellows program, at the end of which I was told it would be part of the 2011-2012 Huntington season. One compelling reason for being a playwright (as opposed to a novelist or a poet) is that it’s a sociable profession for at least part of the year. You spend most of the time alone with characters of your choice. You put words in their mouths. You spend hours thinking about what you should have said in conversations that never took place. Then, if you’re lucky you get to hang out with exciting directors, actors, dramaturgs, designers, all working together intensely for a short time to get the play on its feet and as perfect as humanly possible for opening night. There are few things in my life more stressful and exhilarating than that!

Before I Leave You, produced by the Huntington Theatre Company, runs at The Wimberly Theatre in the Calderwood Pavilion at the Boston Center for the Arts, October 14-November 13, 2011. Find video, audio, images, and articles about the production.

Rosanna Yamagiwa Alfaro is a Huntington Theatre Company Playwriting Fellow whose plays have been performed at Pan Asian Repertory Theatre, Edinburgh Fringe Festival, Magic Theatre, The Boston Women on Top Festival, La MaMa ETC., and elsewhere. She is the writer and narrator of the documentary Japanese American Women: A Sense of Place. Seven of her short plays have been in the Boston Theater Marathon, and eight were finalists in the National Ten-Minute Play Contest. Her plays have been anthologized by Baker’s Plays, Heinemann, Charta Books, Smith and Kraus, and Meriwether Publishing. Ms. Alfaro is 72 years old, and has been a resident of Cambridge, MA for more than 40 years.