My current installation at Brandeis Women’s Studies Research Center, Embedded Legacies, began with a trip I took to visit relatives in Paris six years ago. 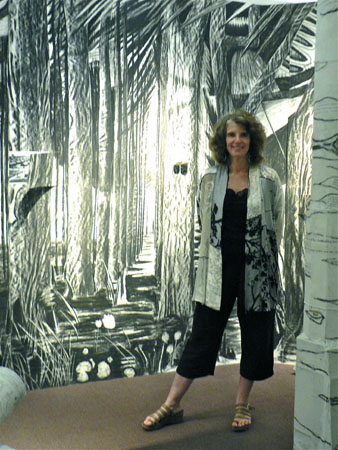 I was digging for information about my mother’s experience during the Holocaust since she had told me virtually nothing whenever I asked her where she was during the War. On this trip, I learned something completely unexpected, that my mother had been in an internment camp, also called a concentration camp, in the south of France.

In the following few years I did research on this camp, Gurs, and then, since I am a writer in addition to being a visual artist, I began writing a memoir incorporating the new information. I applied for an art exhibition at the Brandeis WSRC with the proposal that I create an installation to explore the interface of visual and written storytelling, specifically focused on the Holocaust legacy on a woman’s midlife experience. I also wanted to explore the concept of tree to paper to story to grafting and recycling back into the tree. I had been creating environmental installations for several years, and in 2010 began grafting my prose into the sculptural tree forms in these installations. At Brandeis, I proposed that the writing and environment tell the story of integrating the new information about my mother’s war experience into my adult life in Western Massachusetts and my identity.

The first big challenge was to do specific research on the Gurs camp, on the details of my mother’s internment there, and on the physical environment in that area of France. I managed to arrange an artist residency at CAMAC, an art center in the Champagne region of France, and while there in April, 2012, I visited archives in Paris and Pau, the town near Gurs, and visited the camp itself. I returned and designed the installation incorporating the physical specifics of that geography, and the story of the camp. For the Brandeis exhibit, I focused on depicting the camp as a symbol of one possible story of how a Jewish woman at that time in history may have lived through the War, and the impact of that story on me, the next generation.

The artistic challenge was to express the layers of the camp’s history… after the camp was shut down the local residents reforested to cover over the unhappy memories. Much later the survivors of the camp demanded a memorial be built to honor those who had suffered there. How would I show this evolving sense of suffering over time? The memoir is about the legacy of suffering over the generations. The installation spoke to the legacy of suffering in a particular symbolic representation of the War over time. 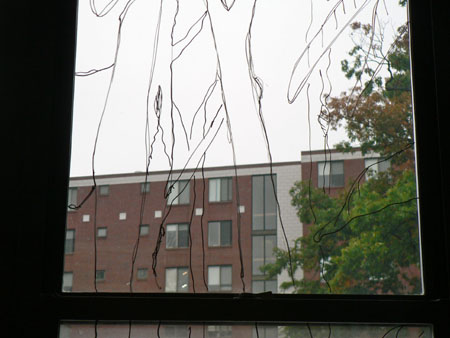 The solution to communicating a sense of time and change was to first depict the reforestation of the camp through drawings and sculptures of new growth trees. These 2D and 3D images are less substantial and detailed than the rest. Some of the drawings have sections that can be opened up to a layer beneath which shows photos of the camp as it was before the reforestation – the barracks, the conditions, the internees. The sculptural trees have peepholes that identify one survivor, my mother. Then the memorial is created out of transparent vinyl superimposed on top of the drawn trees and depicting the pillars that list those incarcerated at Gurs, the walkways that separated the barrack areas, and a facsimile of a barrack. There are sculptural pillars bringing the memorial into the 3D space to represent the present time. The viewer is invited to look behind the new trees to what was there before and to look at the new memorial structures that honor those who were imprisoned there. The grafted prose serves as iconography and also literal storytelling about this history. 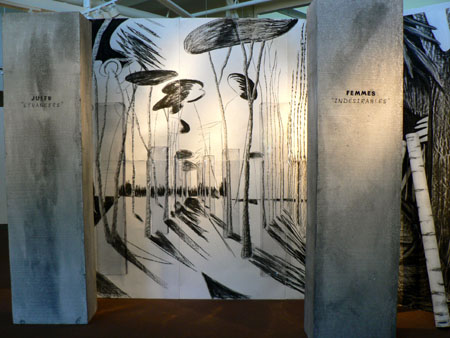 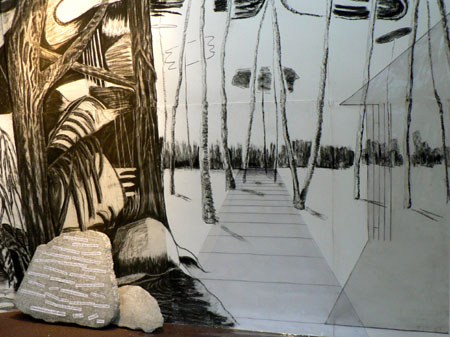 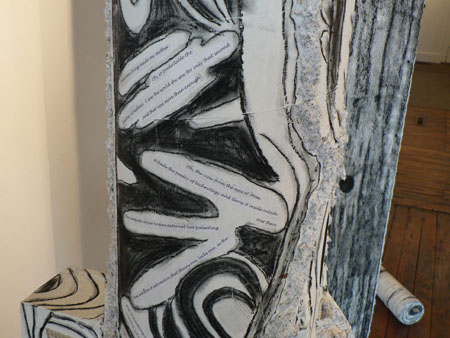 The second half of the gallery represents my current life in Western Massachusetts with its longer-lived forests, and its sense of grounded security. The peepholes in these larger tree forms show images of my parents and my childhood as an American girl. The forest surrounds the viewer with the drawings extending onto the walls and even the windows. 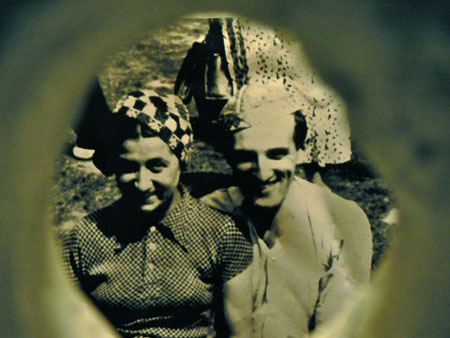 The hope is that the tree forms join these two lives, one who suffered and survived, and one who carries the history as the legacy of the second generation. 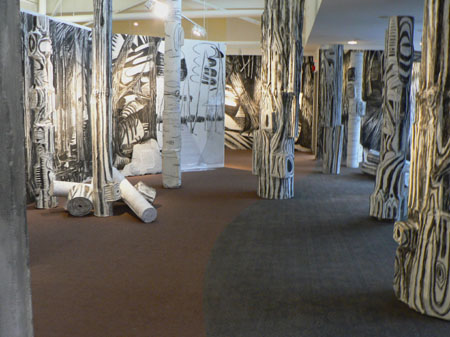 Embedded Legacies: Lydia Kann Nettler will be on exhibit at the Women’s Studies Research Center at Brandeis University through December 18, 2012.

Lydia Kann Nettler creates charcoal drawings and installations, oil paintings, and public art. Nettler has exhibited her charcoals and oil paintings widely in New England. She is committed to exhibiting art in both traditional and non-traditional environments to involve the widest possible audience in the creative experience.