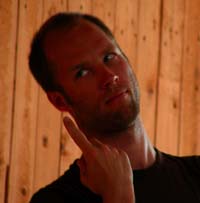 The first artist to take the challenge is the inventive, widely accomplished choreographer and dancer Christian Burns, who received a 2008 Artist Fellowship in Choreography. He discusses the work Beneath Your Sheltering Hand through Creation, Challenge, and Culmination.

I create dances because I want to learn something new.

I start without any single idea directing the final outcome. It’s a mix of knowing and not-knowing. On one hand I bring clear initiation to the creative process and on the other hand I have to maintain keeping no expectations about where it will lead. Then I respond to the energy and flow of those initiations and hopefully arrive at a work that can speak to me, not only me speaking out through the work.

Within Beneath Your Sheltering Hand, I had absolutely no idea what the work would become. Initially the creation emerged because I was invited to create a new work for the West Wave Festival in San Francisco. As a former resident of San Francisco, I was lucky enough to be considered for this curation, which required me to collaborate with a California resident. Oakland based video artist Tony Discenza and I are old friends and this opportunity seemed like a great chance to make a new work together.

We started with one conceptual jumping off-point. We had an interest in exploring relationships between media and our consumer behavior and the American mythologies that drive such behavior.

From an early emailed discourse attempting to articulate this point, Tony Discenza offered, “The oppressive nature of the media and the burden of living in a constant flux of dense, highly mediated information, in such quantities, that no real sense can be made of it. The implication being that the media thinks of itself as somehow benevolent (i.e. sheltering) but really it’s more like we’re crushed beneath its force.” 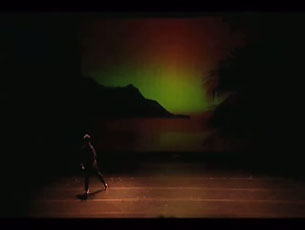 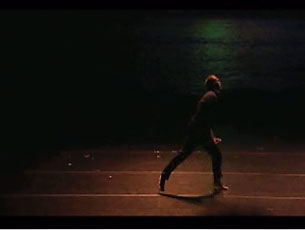 Tony was working with appropriated photo and audio samples – pictures of exotic vacation destinations, SkyMall product descriptions being read by a canned computer voice and high-end real-estate promotional animations as well as other material. All perverted references to the good life – to the American dream. These elements that are supposed to be our desires, but they all are flat, empty and deceptive – ultimately reinforcing an addiction to being someplace else.

Choreographically, I knew I would create and perform a solo. The solo form is something that I have continued to return to over the years. My connection to dance and dance making still comes from my research rooted in the experience of dancing, rather than the objectification of the craft of step-based sequencing. It is the ephemeral experience of dance that I am most drawn to. And for Sheltering Hand I knew I wanted to experience the states that would emerge from physically pushing my body in this way.

I was interested in the moments when impulse becomes action. I wanted to see if I could isolate those moments, in order to subvert and redirect the course of those actions. I wanted to create a textural pallet where I would never be settled within any singular direction. I would always be caught between the moment of initiating an action and cutting off that initiation before it finished it’s following through never settling.

The ongoing challenge of creating Sheltering Hand lay in the fact that we had a limited amount of time to create it and prepare it for stage. We had about a month of long distance discussions where the conceptual elements and title were defined and then we had only about ten days in person to create the work. I was working daily on the choreographic material and we conducted about a half dozen shared rehearsals where we defined the length of the sections and ultimate shape of the piece. The experience of performing the work was an absolutely challenging event for me. It was as much of an athletic sprint as I have ever had in a dance. And as is usually the case, we weren’t going to know how the piece would read to the audience until it was performed. As was the logistic reality of the festival programming, we had only one performance for Beneath Your Sheltering Hand to see what we had. 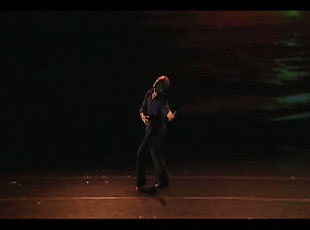 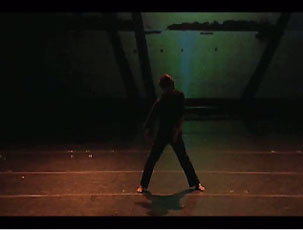 I am very pleased with how this work turned out. It felt on many levels, Beneath Your Sheltering Hand will be a much larger work needing to be fleshed out, in a future time. I was pleased with the balance that the elements found together, the projected and recorded media and the live performance. We found many unexpected layers where the two states of live and mediation overlapped and created new lines of narrative. And perhaps most pleasing of all was how well it was received by the audience. There were audible hysterics heard from the house (not just the laughs from the audio recording), genuine bursts of emotion. For Tony and me, we always hoped the satirical elements would be read loud and clear, but again, one never knows how it will play out until it is performed for a real audience.

Although we have not defined a timeline for the future, it is the intention of Tony and myself to revisit Beneath Your Sheltering Hand and rework it for future performances. 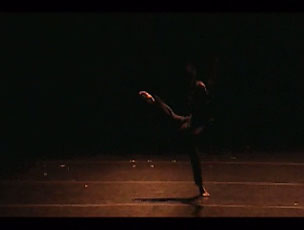 Christian Burns is a choreographer, dancer, and teacher who has worked with companies, schools and art centers around the United States, Europe and Asia. He received an MCC Artist Fellowship in Choreography in 2008.

Images: Christian Burns, care of the artist’s website; stills from Beneath Your Sheltering Hand (2007).