Charlotte Meehan, Artistic Director of the interdisciplinary theatre group Sleeping Weazel, is about to premiere her play 27 Tips for Banishing the Blues (8/30-9/13, 8 PM, at Boston Playwrights’ Theatre), the second in a trilogy of plays called The Problem with People. Here, she traces the sometimes nonlinear journey of creating that trilogy, through three stages in the process. 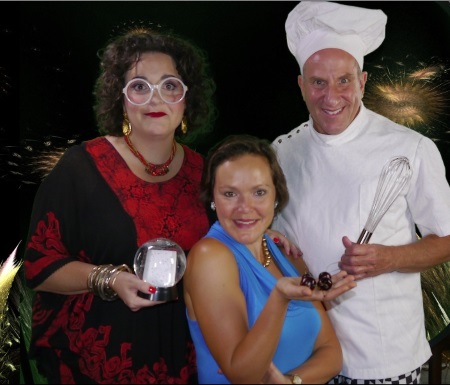 It seems I do everything out of order – or at least sideways. My mother always says I got around until 14 months old by scooting backwards on my butt. When I started writing the first play of my trilogy, The Problem with People, for a long time I just jotted down phrases and then lines until, finally, I attributed them to characters whom I called A, B, C, D, E and HER. Looking back, it makes sense that I didn’t name those characters, as that play, Sweet Disaster, was inspired by my late husband David Hopkins’ animated film series of the same title, by our having lived in downtown Manhattan during the tragedy of 9/11, and by his subsequent diagnosis and death from terminal cancer. Although those characters are very much individuals in many ways, they are also shards of all of us who have experienced the kind of trauma that marks one’s life to the extent that some parts of memory never return. It’s as if there’s a large puzzle in the brain, the pieces one day get tossed up in the air, and even after they’ve landed again, they never quite fit back together the same way. The image I’ve always dreamed into Sweet Disaster is one of my having taken words off all the papers that flew out of the two buildings on 9/11 and re-purposing them as ruins of scenes put together for the survivors.

The second play, 27 Tips for Banishing the Blues, currently in rehearsal for an August 30 opening at Boston Playwrights’ Theatre, was inspired by my need to look at depression, which I 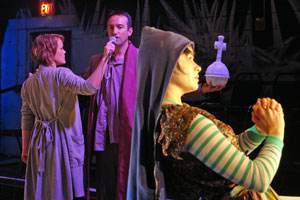 have myself, from an aerial view. In conducting my research, dollar store books such as Banishing the Blues, Happiness, and Why Your Life Sucks and What You Can Do About It took equal billing with sociologist Eva Illouz’s Oprah Winfrey and the Glamour of Misery. I also watched many episodes of Dr. Phil, The Millionaire Matchmaker, and even Maury Povich. Of course all of these sources make a delicious recipe for satire, but on top of that I became more and more aware, through television commercials for new anti-depressants and many products designed to “make you happier,” that in America’s free-market enterprise system even people’s sadness and pain can be preyed upon by opportunists looking to make a buck. While 27 Tips is indeed a very funny play, it’s also a searing indictment of a system that allows the mentally ill to be cheated by promises of healing that only line the pockets of those selling the “cure.”

The final play, Real Realism, is a microtonal view of the lives we are living today in minute-to-minute, ADD-causing increments rather than the two-hour, real-time dramas that continue to be called Realism since the days of Eugene O’Neill, Arthur Miller, and Tennessee Williams. In Real Realism, the five characters mostly pass right by whatever is said to them with an expression of their own immediate need, or by giving advice via string theory and Evolutionary biology, in a style of associative response rather than linear conversation. Basically, the play acts as a mirror to the cultural psyche splitting caused by a bombardment of too many things to do and too much information overcrowding our daily lives. These five characters, who are eventually named, find themselves in some kind of undisclosed treatment center where there is no therapist and they are left to sort themselves out on their own. Essentially, there is no hope for them except in coming to terms with their own demons and that is a tall order in the late Capitalist paradigm they – and we – inhabit. Still, in Real Realism, the five characters eventually become named, as they are meant to represent us in the most full-bodied way of the three plays and we are meant to recognize ourselves in the need to take responsibility for making a better world.

For a long time I said to myself that I get what I deserve (very few productions) for writing these doggedly idiosyncratic plays that very few people understand on the page. Yet each time one of my plays has been produced, audiences largely do understand them, relate to the characters, and experience the kind of emotional transformation I am seeking to create through my writing. After the successful 2008 premiere of Sweet Disaster at the former Perishable Theatre in Providence, I sent the play to numerous theatres in New York and around the country, but gradually came to realize (after receiving high level rejection letters and, in some cases, no response at all) that it was simply not going to be taken on by any of them. If only they could have seen Kenneth Prestininzi’s visionary production, they would get it, I thought. But that’s not how it works.

En route to the Sweet Disaster premiere in 2008, I was lucky to be nominated for the Alpert Award, to receive a Howard Foundation fellowship in playwriting, and to be sent by the Alpert Foundation for a MacDowell Colony residency where I wrote the first draft of 27 Tips for Banishing the Blues. So, before the discouragement of no further productions for Sweet Disaster came upon me, I had already embarked on another play populated by character shards and fractured narrative. Aside from an artist residency and workshop production offered me at Dixon Place (NY) in 2010, 27 Tips was met with the same enthusiastic rejection that Sweet Disaster had received.

Stubborn as I am, I set out to write Real Realism anyway. After all, I had the idea to do it and there was no stopping me in spite of the fact that this play would surely not be produced. At the beginning of my writing process, playwright Jeffrey Jones asked me to submit something to his Little Theatre salon that takes place monthly at Dixon Place and I sent him the first nine pages. In June 2011, director Vanessa Gilbert and I presented the first fifteen minutes of the play there with a group of actors we brought with us from Providence and Massachusetts. It was that summer I realized I must re-launch Sleeping Weazel, the company my late husband and I had founded in 1998 to put on our productions in New York and the UK. Three former Wheaton College playwriting students and I worked toward a January 2012 launch party, Adara Meyers has stayed on as Managing Director, and the rest is history. 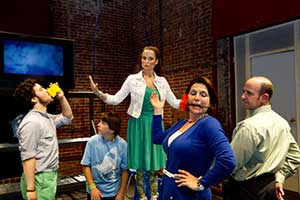 The Problem with People trilogy has been ten years in the making. My means of writing plays, which is essentially to create interdisciplinary dramatic collages for the stage, necessitates that I design a unique means of production to match each of them. In keeping with my non-linear mindset, I decided to unveil the plays of The Problem with People in reverse order, and Sleeping Weazel premiered the final play, Real Realism, directed by Vanessa Gilbert in June 2013 at The Factory Theatre. 27 Tips is about to open, under Kenneth Prestininzi’s direction and with scenic and projection design by Seaghan McKay, through a residency generously provided by Kate Snodgrass at Boston Playwrights’ Theatre. As always, I am sitting on the precipice of culmination rather than resting at the end of its passing shadow, but perhaps that is the nature of my own life drama – or the way I have invented it. Nonetheless, culmination implies death for me, so it’s probably best to keep living in the middle of the scene. I am already thinking about my next play, Cleanliness, Godliness, and Madness: A User’s Guide, a multimedia hootenanny that will have no fans in the Tea Party.

27 Tips for Banishing the Blues by Charlotte Meehan opens at Boston Playwrights’ Theatre (8/30, 8 PM), and will run through 9/13.

Charlotte Meehan is Artistic Director of Sleeping Weazel and Playwright-in-Residence at Wheaton College (MA). Her stage works have been presented in Providence at Perishable Theatre, in Bristol (UK), and in New York at Dixon Place, the Flea Theater, La MaMa, Bleecker Street Theatre, and Pratt Institute, among others. She has been a resident artist in HERE Arts Center’s HARP program and Perishable Theatre’s RAPT program, was a 2008-09 Howard Foundation fellow in playwriting, and was awarded an Alpert/MacDowell Colony residency through the Herb Alpert Foundation.