You are here: Home / artist voices / The Way We Get By – tonight at MFA Boston

The Way We Get By, a documentary film about a group of seniors who gather at a Bangor, Maine airport to thank American soldiers departing and returning from Iraq, has its Boston premiere TONIGHT at the MFA Boston (Thursday, August 27, 8 PM). The film, by Massachusetts filmmakers Aron Gaudet (director) and Gita Pullapilly (producer), has received attention in national news outlets like The New York Times and The Boston Globe, has built audiences through grassroots marketing (including a partnership with the volunteer networking organization the HandOn Network), and won the Special Jury Award at the South By Southwest Festival ’09 Festival.

We spoke to the film’s producer, Gita Pullapilly, about the ways a scrappy and big-hearted independent documentary gets by.

ArtSake: It’s easy to see the appeal of The Way We Get By, a moving and timeless story, but it seems to me the film has also greatly benefited from creative marketing. You’ve received national media attention, do extensive grassroots campaigns in screening cities (contacting military family support organizations, for example), and have a presence in almost every conceivable online community. Apart from energy which you clearly have lots of what has been the driving principal to your marketing of this movie? 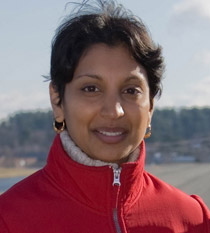 Gita: Well, first of all, thanks for reaching out. I am always excited to talk to fellow artists about this because undoubtedly everyone will tell you what is not possible and if we listened to all of them, we would have never released the film. Our driving principal is we don’t quit. If we find an opportunity to showcase THE WAY WE GET BY in some way little or big we take it. You just never know who is reading or watching something. We work every single day trying to find avenues to promote the film – from pitching to the general media or through our social networking sites to reaching out to grassroots groups. We are a two-person team for the most part so that means we have to update all of the sites and do the newsletter and make the calls and send the e-mails. It is unbelievably taxing but it works. People do come out to see the film and talk with us. It’s a great feeling when someone comes out and says they read about the film somewhere or heard someone talking about it. If we keep the film on people’s radar, it means all of this hard work is paying off.

But just to make it perfectly clear we are nowhere near accomplishing our goal. Just read some of the independent documentary blogs out there and you won’t find them writing about us. But what we realize is that we need to focus our efforts on people and places that get the film and hope they can champion it for us.

ArtSake: Can you talk about your partnership with the HandsOn Network (and the local Boston Cares affiliate)? How did it come about, and how is it affecting the way your film is reaching audiences?

Gita: HandsOn Network was one of our first nonprofit partners. Some of the leadership saw the film, showed it to the board of directors and essentially came on board to help spread the word about THE WAY WE GET BY. We are really proud of this partnership because they believe in the film and they believe in us. This partnership is sure to raise awareness for THE WAY WE GET BY while also highlighting the power of volunteerism, providing viewers a connection point to a local volunteer opportunity at a HandsOn Network Action Center.

HandsOn Network screened THE WAY WE GET BY at the National Conference on Volunteering and Service in June, bringing the producer and one of the senior citizens featured in the film to San Francisco to speak during the sold-out conference. Additionally, some of the more than 250 HandsOn Network Action Centers across the country are organizing special events in conjunction with the theatrical premieres in their cities. L.A. Works, Volunteer Center Orange County and Volunteer San Diego, all affiliates of HandsOn Network, teamed up with Operation Homefront and us to make the Los Angeles premiere on August 14 a red carpet event. These groups brought a red carpet and photographers to the theater on opening night, inviting volunteers and military families to be celebrities for the evening.

Boston Cares has been helping us get the word out locally and will also be attending the Boston premiere of THE WAY WE GET BY. At this event, 20 Massachusetts National Guard members in uniform will be greeting movie-goers as they enter the Museum of Fine Arts to see the film. It will be quite a sight and we hope all of the military families and volunteers coming out feel like celebrities!

Our next big event is with HandsOn Network and several nonprofit other partners in Washington D.C. in late September. Several U.S. Senators, political leaders, military families and support groups will view THE WAY WE GET BY at the newly-opened Capitol Hill Visitors Center on September 30, and it will be screened for patients at Walter Reed Army Medical Center and their families the following day. 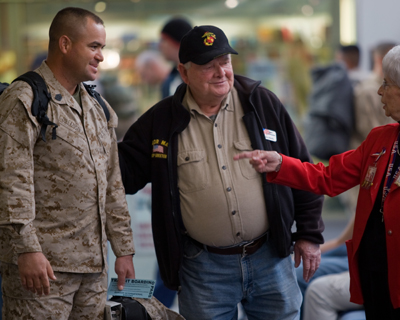 ArtSake: In general, how important have partnering organizations been to your films success?

Gita: We see the relationships with our nonprofit partners as long-term relationships. What we are doing now with the theatrical run is just the start. As we prepare for the national television broadcast, DVDs and community outreach screenings, they will become even more integrated into our plan. If we are successful with these partnerships, we will encourage their missions and they will make our film a success. This is just the start and were hoping that not only will they be advocates for this film but for future projects as well.

ArtSake: How did this project begin?

Gita: Aron Gaudet, the film director, and I started dating when we were working in television news in Michigan. Aron brought me home to Bangor, Maine to meet his 76 year-old mother, Joan. She had started troop greeting so we followed her out to the airport. At 2am during the dead of winter, we went out to the local airport. The first person we met there was 87-year old WWII veteran Bill Knight. Earlier that day he had been diagnosed with prostate cancer, yet he was still at the airport greeting troops. When we saw him walk up the ramp to greet the men and women returning home from war, we instantly got choked up and we knew we had to tell this story. Of course, so much more happened from that point on and the story ended up becoming intertwined with our own life. Aron and I are now engaged and will be getting married in Maine.

ArtSake: You’ve had premieres in New York, LA, the SXSW festival but is there something particularly satisfying about your local premiere (how’s that for a leading question)?

Gita: Boston has been our lucky charm. We have received great opportunities here. We were WGBH Filmmakers in Residence in 2007-2008 and have met amazing friends and fellow independent documentary filmmakers who have given us the confidence to continue making films. After four long years of working on THE WAY WE GET BY, it will be pretty amazing for us to see the premiere at the Museum of Fine Arts this Thursday. This is a very special and emotional week for us.

THE WAY WE GET BY opens theatrically in Boston TONIGHT! The film will screen August 27 – 30 and again on September 2 at the MFA in Boston. Kicking off the Boston premiere, members of the Army National Guard will greet veterans and military families as they walk into the theatre. Showtimes have been announced for all five screenings– Aug. 27 @ 8pm, Aug. 28 @ 8pm, Aug. 29 @ 1pm, Aug. 30 @ 11am and Sept. 2 @ 4pm. Tickets are available now. Director Aron Gaudet and producer (and WIFV/NE Member) Gita Pullapilly will be in Boston for the four opening weekend screenings and there will be Q&As following each showing.

Images: Gita Pullapilly; promotional still from THE WAY WE GET BY. Both photos by Sean Carnell.