You are here: Home / artist voices / The Royal Frog Ballet: an art troupe for interesting times

THE ROYAL FROG BALLET is an amoeba of collaborators, a producing body, a shouting household of households, and an aspiring dance team in search of parade.

– from the troupe’s website (do you, too, get the feeling its audience is in for an interesting time?)

The Royal Frog Ballet is a cross-disciplinary group that blends performance, visual art, music, movement, and a sensibility that’s equal parts Vaudeville and avant-garde. And that encapsulation undoubtedly leaves out important facets of the RFB, because it’s just one hard-to-encapsulate group.

So we asked Sophie Wood, co-director of the troupe (which is based in Northampton but includes members from elsewhere on the East Coast), to elaborate, in advance of an appearance in the upcoming HONK! Festival in Somerville (October 8-10) and a Surrealist Cabaret and Pumpkin Walk in Amherst (October 22-24).

ArtSake: I’m interested in a recent collaboration by The Royal Frog Ballet, The Leaving Nest at the A.P.E. Gallery in Northampton. Can you talk about the interdisciplinary nature of that project – it was billed as “an installation, performance series, and window garden” – and how it relates to the identity of your troupe?

Sophie Wood: Our original idea for using the gallery was to expose our art making process, as well as a product or performance, as part of the showing. The A.P.E. Gallery (as a space) is aesthetically very different from the spaces that we were used to performing in and creating installations for: usually we’re in a barn or a field or a community center or someone’s living room. I think that we were all a little unsettled by the idea of being in a very classy, clean, professional gallery space, and have spent lots of time intentionally creating art that isn’t meant for galleries. But we also wanted to try something different, and were really intrigued by the giant window that is the front of the gallery space which is right on Main Street in Northampton, and generally the down town location as a way of reaching new audiences.

The desire to present our process is part of our aesthetic and identity, I suppose, in that we want to create art that is accessible, that feels down home, that feels like you could make it too, without compromising the quality or the vision. We try to use materials that are cheap or reused, to use spaces that aren’t traditional performance venues, singers that have never sung before. I think part of that is a desire to create art that inspires other people to make art, and part of that is a desire to inspire ourselves to try anything that we want to, regardless of whether or not it’s the ‘art’ that we study or practice. We want to make encouraging art, not untouchable art. 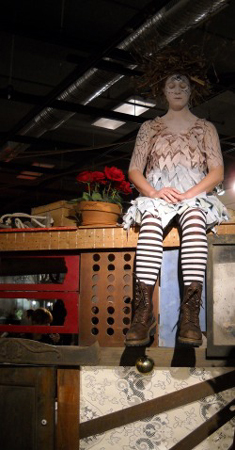 The Leaving Nest was a three week installation. The week before the gallery opened, two muralists started painting on the big walls opposite each other, a team of builders started building a giant boat/house like structure (on wheels) in the center of the room, some gardeners put 30 amaryllis bulbs that had been started a month before in pots in front of the window on Main Street, a pin hole camera was set up with props, and the dancers and writers and costume makers wandered around making little messes in the corners.

The first week we had a gallery opening, and at that point the murals and sculpture were all in a state that could be called finished, the bulbs were poking up in various stages, headed towards blooming, and there were about 8 costumed living human statues amongst the plants and on the boat, and the visitors were being photographed by the camera.

After the opening, we were in the gallery each night after hours, changing the installation, adding to the sculpture, watering the plants painting more on the murals, adding more props, but each day when the gallery opened, all of the art was “finished” and ready for gallery viewing. At night people were always peering in the windows, watching us work or rehearse; we did a lot of singing and dancing in the space at night also.

The second week we performed a costumed and performative singing show from on top of the boat/house, that had been rehearsed and created that week in the space, and the third week we presented a performative choreographic spoken word show that had also been created in the space. The changes made to the murals and the sculpture reflected and added to the performances. Characters from the first show appeared in the murals by the second show, writing from both shows inspired additions to the sculpture and murals, images from the gallery appeared in the writing.

It was an incredibly exhausting, challenging, intensive experience for us as a collective and as individuals. It was extremely educational and thought-provoking and opened up a lot of discussion in the collective about how we present work, how we advertise it, how we structure our decision making. We’re just figuring it out as we go along, following what excites us.

ArtSake: Artists in the Royal Frog Ballet have been creatively collaborating for a long time (you call it an “ever-extending collection of housemates, friends, loves, siblings, classmates, co-workers, neighbors, and networkers”). What are the benefits of a deep and sustained creative partnership?

Sophie: We’ve all been developing our individual art heavily influenced by our surroundings, which, for many of us, for a long time, has included each other. We read lots of the same books, see lots of the same shows, hear lots of the same music; Our thought patterns have become similar, but our brains and how we process ideas, images, organization, are still very much individual. We introduce each other to new concepts, images, sounds, and pick them apart or build off of them together. The benefit is never having to explain yourself and who you are before you explain your idea. The benefits are similar to the benefits of family; Sometimes they drive you bonkers, but their confidence in you is irrationally solid, their support is unending, and their understanding of who you are is inexplicable. 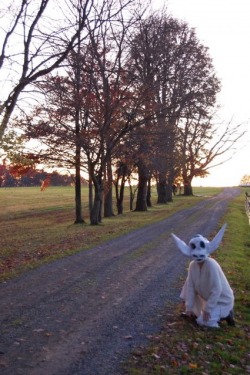 We know what each other’s abilities are and what our weaknesses are and where we struggle and where we excel and when and how to push and when to encourage and make tea, and when to stop. We know how we tick. We can usually read each other, for better or worse, as whole humans, not just as artists. If someone is struggling with an idea or at a rehearsal, we can often read or feel comfortable asking if it has to do with the art or with something unrelated. We know what to expect, and also we know what wonderful, creative, irrational, unexpectable beings we all are. We have a lot of minds to help us create that know us well, that live in our same world of place and of image and idea, but don’t see or process the world in the same way.

ArtSake: I love the premise behind the Surrealist Cabaret: an open studio for performance artists. Can you offer a few snapshots of what an audience visiting your “studios” might experience?

Sophie: That’s top secret. Or, maybe the studio hasn’t even been opened yet.

Could be that they see moving sculptures, a dance number or two, unexpected instruments, extravagant pumpkin art made by lots of ‘pumpkin artists’, magical landscape occurrences, unusual tree fruit, beasts of all shapes and varieties, and masked story tellers of questionable quality.

ArtSake: The Royal Frog Ballet is participating in the HONK! festival for the second time. Can you talk about how your troupe’s aesthetic jells with the spirit of HONK? 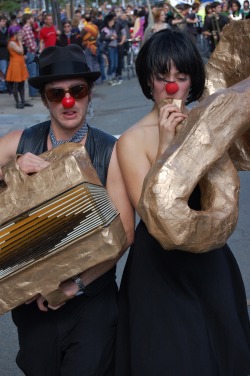 Sophie: I think our ‘aesthetic’ as a group is based whether or not it’s going to be a good time, satisfying, joyous, magical, or cathartic. HONK! is an unbelievable event. To me the most radical part of HONK! is how much pure fun it is, how inclusive that fun is, and that the inclusivity doesn’t make the fun lose any of its grittiness or edge. So, when we had the opportunity to bring our clowns (who follow no rules or choreography) to the streets with our ‘instruments’ (sculptures), it was too much of a good time to pass up.

ArtSake: Sophie, do you create your own solo work? And if so, how does it differ and/or crossover with the work of the troupe?

Sophie: I do, I have, I will, it’s complicated. I write poems and little books for bad days, I make exotic pinatas for weddings, paintings and collages for birthdays, papier mache sculptures, I dance, I perform, I make puppets and masks and costumes, I write plays, I dream of mastering the spoons. I co-direct a Shakespeare and physical comedy program for young people in Vermont. I make and do whatever strikes my fancy. Since a fair amount of my time goes towards the organizational and secretarial aspects of the Ballet, and setting up events in which to share work (which I then share work in), the difference between my work and Ballet work sometimes feels murky. I think the bulk of work that I make that seems most clearly my own is work that never gets shown, (or isn’t meant to be). One of the main reasons that working together was so appealing from the beginning is that it’s intimidating and exhausting to show work by yourself. It can lead to a lot of lonely artistic doubt. Support and encouragement to show and put art out in the world, regardless of how ‘ready’ it is, is one of my favorite aspects of working with the RFB.

ArtSake: What’s up next for The Royal Frog Ballet?

Sophie: A nap. A meeting. A bowl of french fries. A winter full of of individual touring and art making. A street performance event in Northampton in April, featuring members of our collective and other companies and artists from New England.

The Royal Frog Ballet will participate in the HONK! Parade in Somerville, Sunday, October 10, 2010. They present the Third Annual Surrealist Cabaret and Pumpkin Walk at 5:30 PM (rain or shine) on October 22, 23, and 24, at Old Friends Farm on Bramble Hill in Amherst, MA.

Sophie Wood co-directs the Royal Frog Ballet and the Get Thee To The Funnery! Shakespeare Program and several other theater workshops for young people in Central Vermont.