You are here: Home / mixed media / The inventions of Cambridge Street 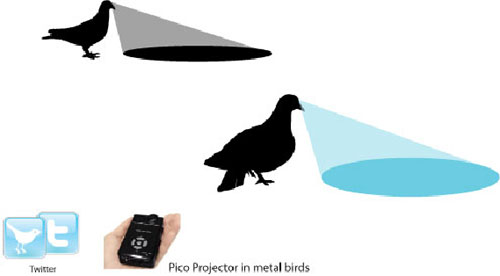 The above image, representing a project called “Gossiping Birds” (which features bird sculptures projecting live Twitter “tweets”), is one of the art installations vying to go from theorized to realized on Cambridge Street.

“Gossiping Birds” is a proposal by Nick Rodrigues (MCC Sculpture/Installation Fellow ’07), one of ten artists chosen as finalists for a Public Art Commission in Cambridge, an initiative of the Cambridge Arts Council.

The project called for site-specific public art proposals for the Cambridge Street Corridor, a one-mile stretch from Inman Square to Lechmere that spans three distinct neighborhoods. The ten selected project proposals will be on display through June 11, 2010 in the exhibition “The Cambridge Street Project” in the CAC Gallery in Cambridge. 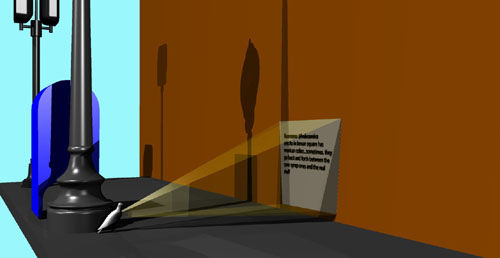 Artists could submit proposals in any media – and that inclusiveness is definitely reflected in the variety of the ten finalists. There’s Nick’s interactively tweeting birds, D’Ignazio’s “World’s Largest Pot Luck Ever” (which aims to be just that, Guinness Book-wise), and Halsey Burgund’s musical compositions created from “caught” Cambridge Street voices, to name just a few of the intriguing inspirations sprung from local brains.

In May, a selection committee including the original art jury and Cambridge Street residents/business owners will convene to select one project for implementation within the following year.

You can read more about the proposals, and check them out in person at the CAC Gallery. Also, attend the free artist receptions on First Mondays at the CAC Gallery: May 3 and June 7, 6–8 PM, featuring live performances, food and community.

Images: pictures from the proposal for GOSSIPING BIRDS by Nick Rodrigues.