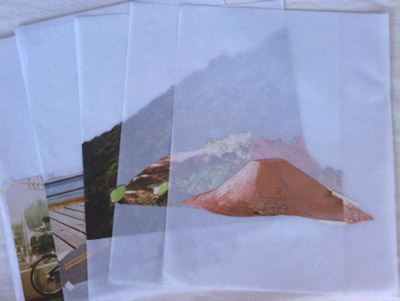 This Monday, March 22, at 7:30 PM, Sue Murad (Choreography Fellow ’08) and a group of artists will perform Buried in the Park Street Church overlooking the Granary Burial Ground. It’s a work of performance art that culminates three years of research (or rather, begins to culminate, since Sue plans to continue creating new performances).

Sue is one of those artists – and she’ll tell you this herself – that’s really hard to categorize. The same applies to “Buried” and Sue’s ongoing project. The project has its immediate origins in a series of 30 “word themes” that Sue sent to 40 different people last year. Sue asked for their responses to words like harbor, hymn, government, and those responses could be in the form of anecdotes, poetry, or… you name it.

“There was a nice blend of written response,” says Sue. “Some writers were incredibly short and literal. A friend typed me a nice long letter on a single sheet of paper for each word.” Other respondents were less literary. There were sound files, drawings, and collages (such as the collage above, by artist Jessica Gath). Sue read the words to her art group, and observed the movements they made in response.

Those responses, in all their variety, make up the raw material from which Sue created Monday’s performance. But where did the words come from?

To answer that, we need to look back four years, when Sue began reading Biblical stories with a new curiosity: What was happening elsewhere in the world at the same time? She bought a chronological Bible, in which a theologian had noted historical parallels to the stories – for instance, Buddha was born in the time of Daniel. “It threw me!” Sue admits. Prior to that, “the stories had seemed in the clouds. They were truth to my heart, but they didn’t seem like history.” For Sue, the chronology placed the stories “on the Earth.”

So began three years of research undertaken for “the joy of reading and the beauty of culture and the fascination of the planet being full of civilizations at shockingly different stages of development at the same time.” Sue knew the research would eventually lead to some kind of artistic performance, but hinging that performance on a timeline didn’t feel quite right, because of the discrepancies about dates that often accompany ancient history.

“I decided to look back at my notes and see if there were themes that I as an artist found interesting. That’s where this group of 30 words came from. It was hard to get it down to 30, but once I had this list, then I felt I wanted a contemporary collection of voices to respond back.”

Monday’s performance will begin in the Park Street Church lobby, overlooking the Granary Burial Ground, and will rove throughout portions of the church in site-specific responses to the word themes – which are in themselves responses to a study of ancient cultures. (See what I mean about being hard to categorize?)

Sue received her MCC award in Choreography for her work designing movement for the art rock band UV Protection. The award may not have resolved the “category” question once and for all, but it did validate Sue’s artistic work. “Because I was always in the band world, it felt far from art dialogue. So much art is about conversation. To know that I put something out there to other choreographers, to other people who love dance, and that they would award it, was wonderful to me.”

When she received the grant, she earmarked some for expenses like loans and new equipment, shared a portion with her UV Protection bandmates, and, curiously, set aside an amount to give to another artist she wanted to support and encourage. This choice, too, has its roots in ancient literature. “Biblically, it’s called a tithe,” she says.

Image and video: A collage in response to the word buried by Jessica Gath; a video excerpt of DROP POP by UV Protection.