The cutting edge has never looked so beautiful and wild. ArtSake invites you to take a peek into the fecund world of Resa Blatman and her studio. 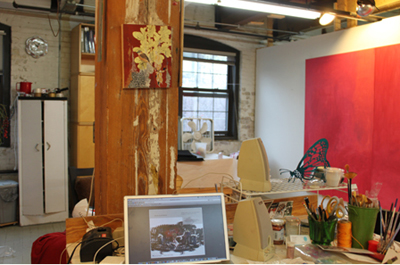 My studio is very busy right now with several paintings going on at once: a 13 foot triptych (on aluminum panels); two medium sized cut-edge; and six small cut-edge paintings (on acrylic) all in their beginning stages. 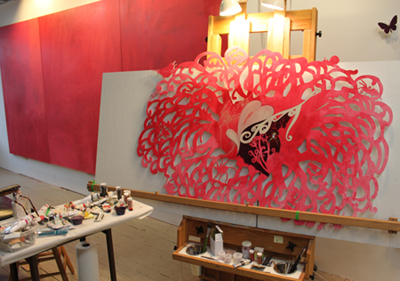 Three panels in background have just been prepped to start a new painting (13 feet). This will be my first, large rectangular painting since 2008. The cut-edge panel in foreground is in intial stages of painting.

I start my work process on the computer, where I design the edges of the panels. The digital files are then sent to the laser cutter, who cuts the intricate and curvy patterns on large scale machines. Once the panels are back at my studio, I go through several steps to prepare the surfaces, depending on the substrate, and then I start painting with oils. Although I start out with a rough idea of what I want the painting to look like, the composition is not planned, and the painting may change several times as I work on it. 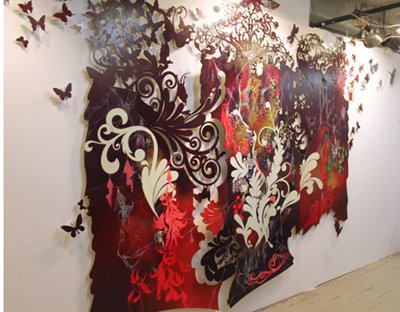 I recently completed “The Golden Mean,” a triptych painting/installation.

I’m intrigued by varying materials and enjoy experimenting with, and adding them to, the surfaces. Although, they should strengthen my concept in order for me to use them. The cut-edge panels hang at different levels from the wall, pushing the boundaries and the 2-dimensionality of painting, which I like very much. But at the same time, I’m a big admirer of luscious brush strokes and traditional painting. My compositions are inspired by the Renaissance, Baroque, Victorian decorative art, and botanical imagery. 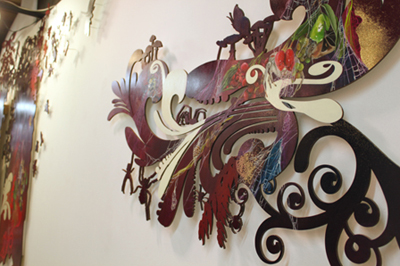 A part of “The Golden Mean” in the background and “Woven” in the foreground.

The concept behind my work has to do with animals, sexuality within nature, and our fragile natural environment. The cut-edge surfaces are new since 2008. The various edges, which may include animals, insects, and flourishes, are an extension of the patterns within the paintings. These cut forms, along with the shadows made by the cuts, encourage a three-dimensionality to the work, and by doing so, the paintings become more experiential and boundless. 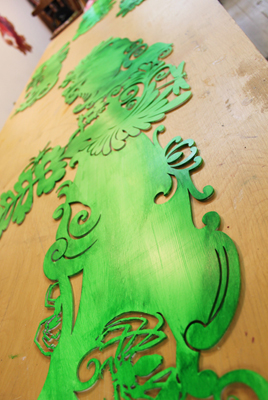 Six small cut-edge panels just given base coat and ready for painting.

You can see Resa’s work in person at Miller Block Gallery in September/October 2011.  If you can’t wail until the fall to see more of her work, be sure to check out her website.