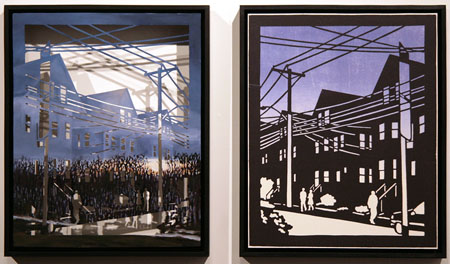 Rachel Mello (Painting Finalist ’10) recently returned from a one-month residency at Ucross Foundation, an experience that allowed for deepened explorations of her unique, cut-silhouette paintings.

Rachel drove out to the Wyoming cattle ranch, where artists, writers, and composers take up residence for intense focus on their work. Bringing only what she needed, she worked spare. And she got used to it: upon return to her workspace at Mad Oyster Studios, she immediately thinned out her supplies and gave away older artworks to anyone who would donate to the charity Food for Free. Spaciousness is well-suited to Rachel’s practice, which requires several distinct work stations – and yields truly distinct work. 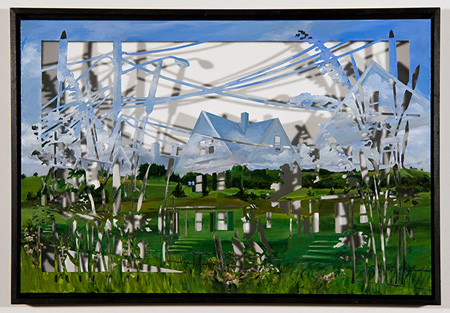 Rachel’s paintings exist in multiple places at once, with surfaces cut to silhouettes (often urban scenes) painted with contrasting landscapes (often rural or pastoral). The urban/rural tension is a theme the artist has been grappling with for years, and her ideas began to crystallize during the 2000 mile drive to Ucross, winding through Midwest farmlands and ranch communities of the Great Plains. So much of the world’s population lives in cities, with little awareness of what it’s like to be in a rural setting (Rachel, living in big cities all her life, among them). Yet city dwellers are more dependent than ever on food and farming practices of rural areas. Despite the disconnect, there are always two sides to the way we live, urban and rural livelihoods that depend on each other even while they are separate. Rachel is passionate about this interdependence and interconnectedness, and what she thinks of as the shared humanity of disparate people. “These differences in how we live and see the world are simultaneously deeply profound and at the same time profoundly superficial, when you come down to it.” 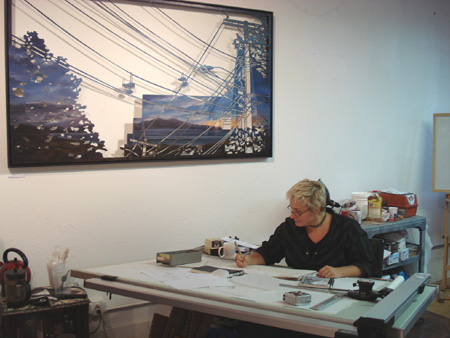 Here, you can see Rachel sketching at her drawing table. Sometimes, Rachel paints from photographs, but at Ucross she began experimenting with painting from her own loose sketches. A passing storm cloud – too ephemeral to capture with the more time-intensive process of painting, and too dramatic in lighting and color to capture in a snapshot – inspired her to grab her colored pencils and sketch. Later, she would work from the sketch to create a painting, giving her landscape one further magnitude of artistic intervention. The rest of her time at Ucross after that evening, she spent alternating between sketching and painting, developing a new process for herself that she has continued on returning to Somerville. 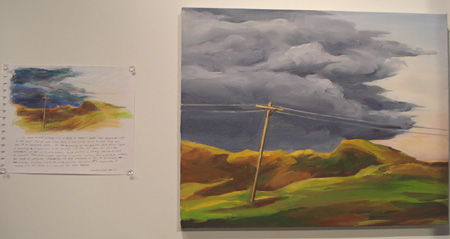 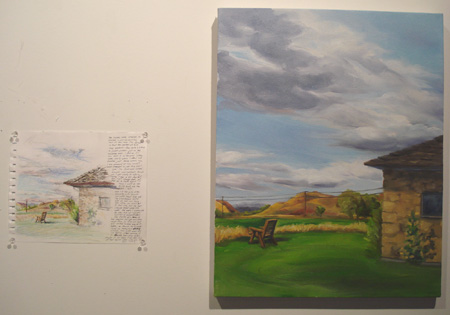 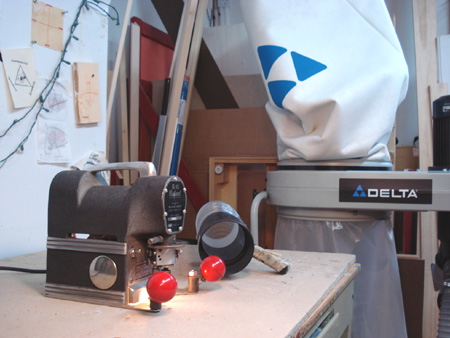 Installed, the paintings play with dimension, making depth and shadow part of the visual experience – as would a design for the stage. For the new works from Ucross, she painted both sides of her silhouettes. The works are meant to hang suspended from the ceiling rather than against a gallery wall. She plans, for her next show, to hang all of the works this way, overlapping and filling the space, with the only work on the walls being the shadows of the suspended pieces. 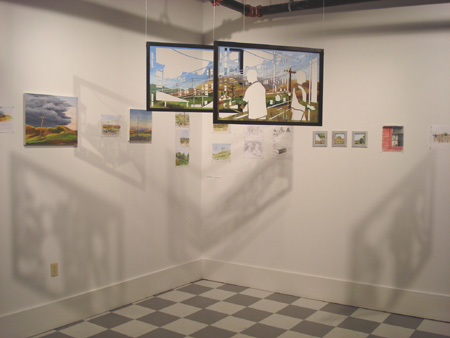 The new paintings embody Rachel’s past concepts and expand them. Duality encompasses the work. The pieces contrast imagery and landscapes but also artistic disciplines, suggesting sculptural depth while rooted in two-dimensional forms. Inside and outside, urban and rural, flat and planed, past and present: all co-exist in where we are now. 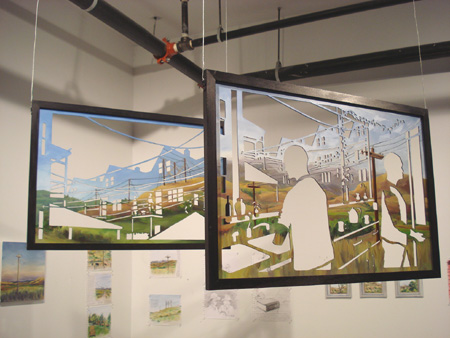 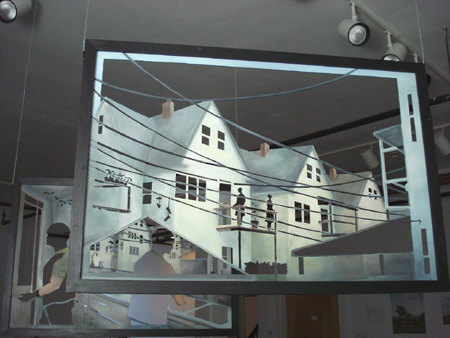