We heard about an intriguing art show opening this weekend in Allston – Spin, which features art pieces made from cassette tapes and vinyl records. We got in touch with Kevin Hebb, the artist who came up with concept and one of the show’s contributors, and asked him to give us a peek into his studio, his work, and the origins of Spin. 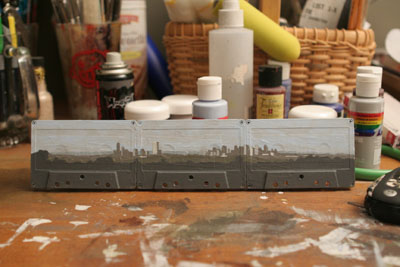 The concept behind the show came from my interest or addiction to nostalgia. I am not alone in feeling that part of our childhood was taken away with the emergence of the Internet… or am I? The theme of this show is one of dedication to how things used to be and how far technology has come in such a short time. Cassettes and vinyl records were chosen as canvasses for their classic iconography and simplicity.

As an artist I am naturally inclined to question subject matter. It is in the dislike for modern culture that I am left with an unfortunate feeling of bitterness. When music turned into a platform to make a quick dollar off what was trendy, we saw the cassettes start to rot on the store racks. People began to glorify the Internet’s ability to put everything at your fingertips. Mixtapes became a thing of the past as music downloads and MP3 players started to emerge. This show will honor the simplicity of a looping bass line playing under a slowed down disco beat. A time when grunge was grunge, and no one did anything for the sake of fashion. 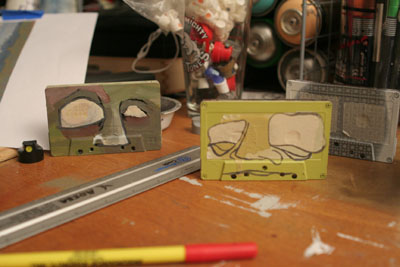 Growing up on the south shore of Massachusetts, I acquired an outsider’s point of view of the hustle and bustle of the city. My work embodies the grit of Dudley Station and the stillness of Borderland Park. Often my work shows distant views of a blank cityscape popping off of layered backgrounds inspired by far off vantage points and graffiti filled alleys. 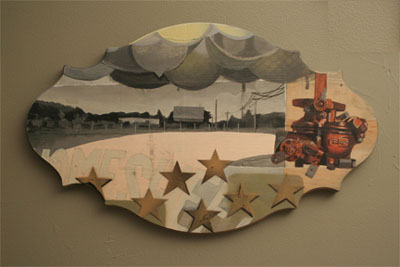 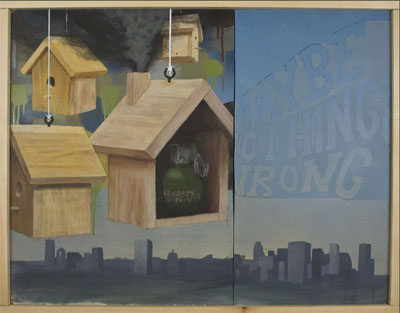 Want to see Kevin’s completed work for SPIN? Rescue Apparel and Accessories (252 Brighton Avenue in Allston, MA) is hosting GLOVEBOX’s latest show SPIN, featuring the work of local emerging artists. The opening reception on March 1 from 6-9 PM; free and open to the public. SPIN is on view until March 29, 2009. 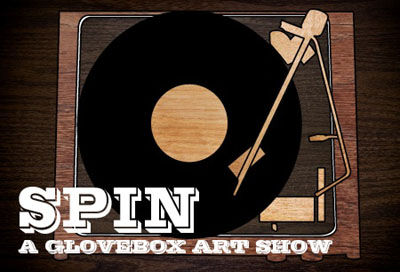 GLOVEBOX is a non-profit artist organization that enables artists to exhibit their work in non-traditional spaces around Boston. GLOVEBOX works side by side with local venues to create these alternative spaces, building relationships with these business and the public.