In the early 20th century brave explorers traversed the outer regions of the North Pole without the luxury of modern navigational technologies to rely upon. The risk to the crews’ lives and ship was great and often explorations resulted in a shipwrecks. Artist Heddi Vaughan Siebel has created an installation about one such failed attempt in which her grandfather was a member of an expedition team traveling to the North Pole. Let’s take a look at her work and process and what drove her to make this installation. 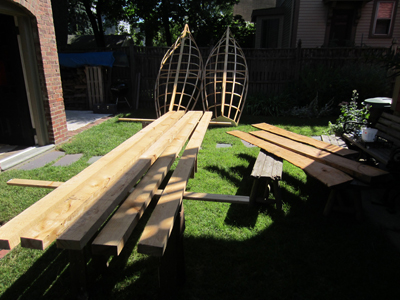 “Are those really boats in your yard?” my neighbors ask as I prepare for my installation AIMS, HOPES, AND ENDEAVORS at the Stamford Museum in Connecticut. (Sept 9-Oct 30, 2011)

I am inventing the skeletal structure of a polar camp in prints and film—art that also will respond to a simultaneously displayed historical exhibition LAST FRONTIERS: Anthony Fiala and the Race to the North Pole by Collections Curator Rosa Portell. My work is the outcome of a 15 year project that began as a painting expedition to the Arctic. Since 1998 I have been interpreting the historical materials of the Ziegler Polar Expedition of 1903–05 and investigating my grandfather John Colin Vaughan’s role in it. The men failed in their attempts to reach the North Pole. Their ship was crushed by ice, marooning them on the Franz Josef Land for two years. 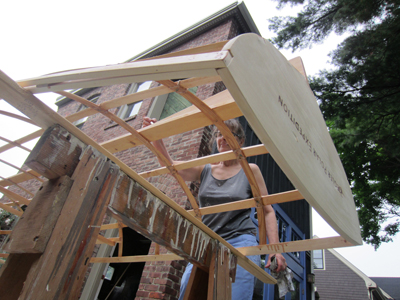 I want to evoke the interior place of my grandfather’s arctic camp, and allude to the conflicting identities of that place as both safe haven and prison. A tent catches the shadowy figures of the men as they decide to quit the effort north. 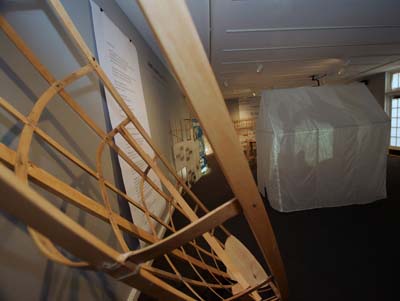 Hand-pulled etchings on translucent gampi paper and cyanotypes are stretched like skins on gridded navigation-like structures of wood lashed together with gut. 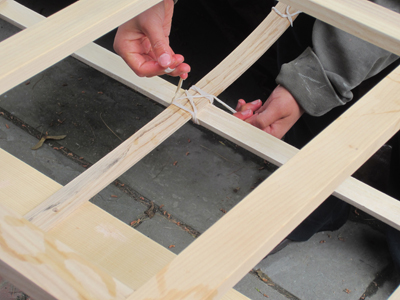 The etchings are printed at Mixit Studio a collaborative I’ve been working at since 1980. The screens begin by suggesting an illuminated and somewhat inscrutable glacial landscape but end by transforming into a stack of what they really are—unused and useless frames. Even the most lavish amounts of supplies taken north by the Ziegler Expedition could not guarantee polar success. The images and texts of the prints are hand drawn or photographically created from the archival texts I have collected about the Ziegler expeditions. 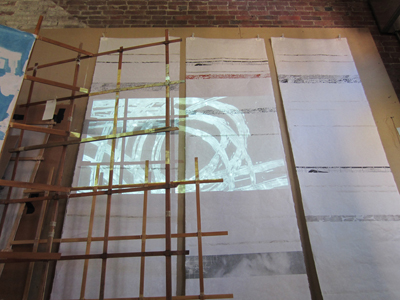 On hanging scrolls of opaque white paper printed with horizontal bands of woodcut I project and integrate a film imagining the moment when my grandfather’s curiosity and dreams collide with the disappointing reality of their endeavor. Part documentary and part invention, this fragmented narrative mixes actual archival films taken on the expedition and quotes from the mens’ journals with invented scenes and animation. 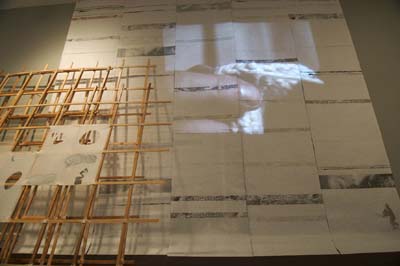 Here the men enter a white landscape from which there may be no return, and wrestle with fear and longing as they search for value in their efforts. I conflate the print forms with the film editing to build a sense of endlessness in both sea ice and time, and make a synthesis which flickers spatially between near and far—‘here’ and ‘there’. 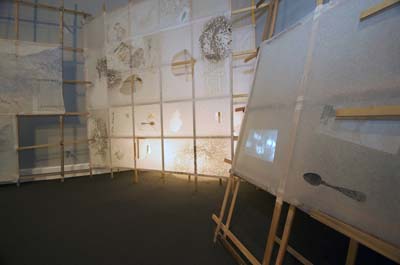 One of the coolest aspects of my show is exhibiting my work with a Ziegler Expedition horse sled from the Museum’s collection! 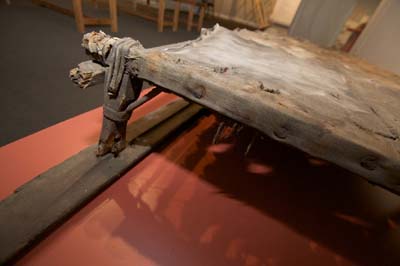 AIMS, HOPES, AND ENDEAVORS: An Art Installation by Heddi Vaughan Siebel will be on exhibit through October 30 in the Stamford Museum’s Bendel Mansion Museum Galleries.