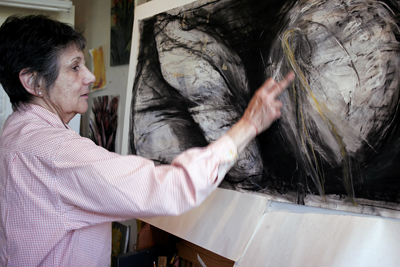 We caught up with Cynthia Maurice (MCC Drawing/Printmaking/Artist Books Fellow ’02) and asked her to tell ArtSake a little bit about what’s going on in her studio.

According to Cynthia, she likes the concept of exposing her process by inviting the viewer to see how her visual ideas develop.

Her exhibit, Fresh Cut, is based on two series, vegetables and flowers, and alternates between drawing and painting. Together, the finely finished paintings combined with the rougher, but equally considered drawings, reflect an artistic process that speaks to the conversation between the two mediums, as well as the tensions between abstraction and realism.

The flower drawings in the series focus on the fleeting, transformative aspects of a bloom from bud to decay. 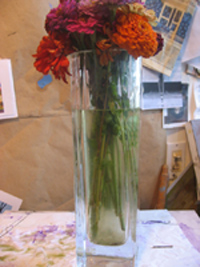 Beginning with a small painting of radishes that evolved into a union of abstraction and reference, the vegetable series allowed the artist to test herself in new, more personal ways. 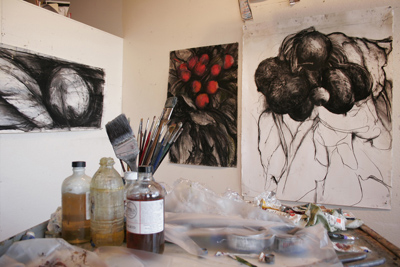 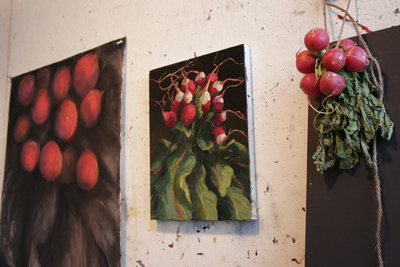 Her intentional inclusion of erasures and then re-drawing are enhanced by written notes on the surface of the works, which resemble sketchbook diaries.

To see more of her work in person, be sure to check out her upcoming solo exhibtion called Fresh Cut at the Newton Free Library. The opening reception is June 2. The show runs from June 2 – 29. 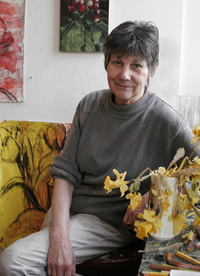 Cynthia Maurice holds MFAs from the School of Visual Arts, New York, NY and Boston University. She has won numerous awards and has had many group and solo exhibits. She has taught in the New England area for many years and most recently at the Danforth Museum. Her work can be found in many corporate collections including Bank of Boston and Beth Israel Hospital.

Images: All photos by Rita Lombardi