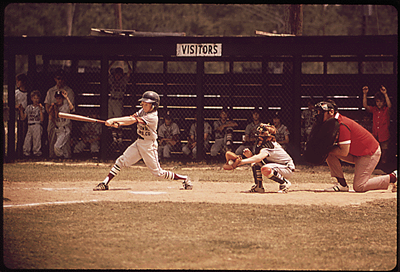 Better to take a big swing then just stand there and watch an opportunity fly on by. We’ll cheer you on!

Call for Artists The Annmarie Sculpture Garden & Arts Center, in association with the Smithsonian Institution, is currently accepting entries for their Glitz: Art That Sparkles show. Seeking works that contains over-the-top embellishments, elements, colors, and designs. Artists that create art that sparkles, twinkles, shines, glitters, glistens, and gleams are encouraged to respond to this call. Learn more.
Deadline: July 31, 2012

Call to Artists The Nave Gallery in Somerville, MA, is currently accepting entries for their exhibition (October 6–28, 2012) The Big Bad curated by Jenn Harrington. Visual artists working in all 2-D and 3-D media (including video and installation) are invited to submit work that focuses on the all things bad in this world of ours. Learn more.
Deadline: August 25, 2012

Documentary filmmakers The Camden International Film Festival is seeking submissions for its 3rd annual Points North Pitch session which is part of the Points North Documentary Forum. This conference is seeking six finalists to present their work-in-progress films on September 29. The pitch competition is open to all non-fiction feature films in development. One winner will receive a cash prize, a scholarship to Maine Media Workshops as well as potential additional funding from other foundations. Documentary Filmmakers who want to participate can submit a synopsis summary, as well as a trailer of no more than five minutes. Learn more.
Deadline: August 31, 2012

Fine Arts and Crafts The Shop at the Arsenal Center for the Arts is currently accepting submissions for consideration for artists to have their work for sale in their Fall/Winter season. Learn more.
Deadline: September 1, 2012

Writers The 2012 Barthelme Prize for Short Prose sponsored by Gulf Coast magazine, is currently accepting submissions. Ander Monson, editor of the literary journal DIAGRAM and New Michigan Press, will judge. The contest is open to pieces of prose poetry, flash fiction, and micro-essays of 500 words or fewer. Established in 2008, the contest awards its winner $1,000 and publication in the journal. Learn more.
Deadline: September 1, 2012