You are here: Home / traditional arts / Smee on Keepers 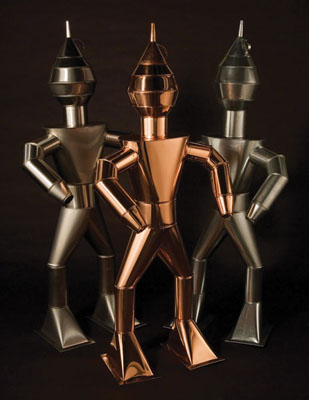 Art critic Sebastian Smee had a warm review of Keepers of Tradition: Art and Folk Heritage in Massachusetts, in Friday’s Boston Globe. The show is curated by state folklorist Maggie Holtzberg and runs at the National Heritage Museum through February 8, 2009.

The show begins… with a dazzling costume from Boston’s Caribbean Carnival made by Tamara Shillingford. The festival, held at the end of August, is rooted in Mardi Gras and, according to band leader Errol A. Phillip, the kind of celebrations that took place “when slavery was abolished. You’re giving praise for freedom.”
…
In a similar vein – but emerging from a completely different tradition – the show includes three tin men made by retired sheet-metal workers William Walsh, Glenn Walker, Daniel Hardy, and Richard Clarke. Tin men appear in another local festival with deep roots, the St. Patrick’s Day Parade, and they are traditionally a way for metal workers to advertise the products of their trade, recruit apprentices, and display union pride. The three here were made especially for this show. “We are the only trade that takes a flat metal stock from the mill and rolls it, forms it and fabricates it,” says Walsh.
…
(The exhibit is) one part of a much bigger project, which includes Holtzberg’s great catalog essay (it explains the stories behind the various objects in some depth) and, beyond both the show and the catalog, a great deal of valuable documentation, which can only help in the attempt to keep these traditions alive and the effects of too much TV at bay.