You are here: Home / artist to artist / Separate or Integrate Your Art with Your “Other” Life? 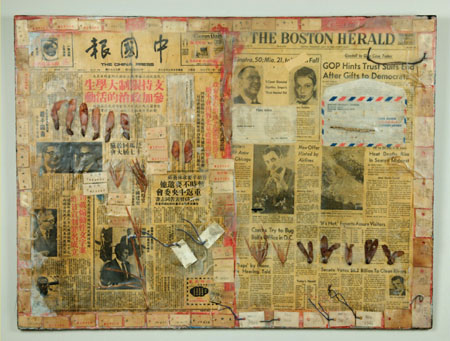 Many artists have parallel careers or lifepaths; some are doctors, scientists, teachers, designers – poet Wallace Stevens was an insurance executive. Some artists choose to integrate their art with their other career; some, whether by choice or necessity, keep them completely separate.

We asked a group of artists: Do you separate or integrate your art with your ‘other’ life?

Lisa Gruenberg, physician and writer
I started writing in 2004, when my father, a Holocaust survivor, began having nightmares and flashbacks about the past. At the time I was working in a busy gynecology practice, my father-in-law was dying, and our youngest daughter was sick. I spent a good deal of time in hospitals and hospice. The borders between family life, work life and writing blurred. After my father and father-in-law died and our daughter healed, I was better able to separate these parts of my life. But writing continues to influence my practice, and medicine my writing.

Writing deepens my understanding of suffering, and I feel I am a more empathetic physician as a result. I not only listen more but I hear more. I travel on medical missions, mostly in Africa, and some of my pieces are set there. I grapple with the same themes I started out with when I wrote about my father. I am drawn to survivors of tremendous personal tragedy in the setting of great historical tragedy. The AIDS epidemic, genocide, poverty and racism all impact my stories, whether they are fiction or nonfiction, about medicine or not, or set in Africa, Europe or the United States. And being a physician, I am told remarkable stories that send me back to my writing desk, inspired.

Vladimir Zelevinsky, playwright and computer scientist
Every time someone finds out I’m a playwright and a scientist, I get the same excited suggestion: “You should write a play about science! You know, like dramatize some law of science!”, to which I tend to respond with, “Yeah! Maybe about how two plus two is four!”, which somewhat dampens the enthusiasm of the suggester. For me, the laws of science form the basic building blocks of thinking; I have no interest in dramatizing the alphabet.

At one point, I got to wondering if two people – complete strangers – can fall in love in, oh, say, two minutes. So I wrote a play where the final scene was exactly that – and since the play works, I presume this means the answer to my question is: yes, they can.

So this is how I use art: as a laboratory. Reality is not always the most convenient venue for experimentation, and if I have a question I need to answer, I put on my metaphorical goggles and a virtual lab coat, and command my internal Igor to crank up the bellows.

Alberta Chu, biologist and filmmaker, producer/director of ASKlabs
When I left biology to pursue science communications, I wanted to make science “cool” to the general public. But I also love art – I spend most of my free time at art museums, galleries, and on art/architecture pilgrimages. After producing popular science TV programs for several years, I decided to try integrating art and design into my science documentaries, with the goal of attracting new audiences to science. Making films about art and science combines my science background with the dramatic and aesthetic medium of filmmaking. I love being able to document cool science with an aesthetic sensibility, and being able to explain science visually and narratively. I am fortunate to be working in Boston, as it’s a major hub of science and art, which means I have access to innovative people and ideas, and there are plenty of other scientist-artists around who inspire me.

An example: In January 2013, the first historic DES breast cancer trial took place in Boston. (Note I was not a plaintiff.) Because everyone involved with the trial was under a gag order, the media approached me for commentary as a DES Daughter and the writer behind Wonder Drug, a feature about the DES drug disaster now in development with actor/creative producer Alysia Reiner (Netflix’s original series “Orange is the New Black;”Sideways).

My students saw me on TV and wanted discuss my interviews before English class. Recognizing a teachable moment, I swung the conversation over to the writing process for Wonder Drug. I stressed that we all have stories living inside us. The trick is putting them down on paper.

A few days later, several students handed me poems and artwork that they created outside of school. I helped them submit their work to KidSpirit Magazine, which published everything before summer break. My students were thrilled – and I was *beyond* thrilled as a teacher and writer. I live to inspire and educate others in every area of my life. I don’t always succeed, but when I do… wow.

Related reading: read ArtSake’s discussion What makes for a good day job as an artist?

Alberta Chu is producer and director of ASKlabs, where current projects explore the Datavisualization of Genomics, Coral Reef Conservation and Climate Change, and Inside the Sciart Laboratory. More info at www.asklabs.com, on Facebook, and on Twitter. Alberta will speak at Nerdnite Boston on September 30th at Middlesex Lounge in Cambridge.

Dr. Lisa Gruenberg is a member of the Writers’ Room of Boston and Grub Street Writers. She works at Children’s Hospital Boston, teaches at Harvard Medical School, and in 2010 was named to the Fulbright Senior Consultant Roster for Global Health.

Caitlin McCarthy‘s screenplay WONDER DRUG, currently in development, was praised by actress Alysia Reiner in an IndieWire interview as an “incredible script.”

Vladimir Zelevinsky‘s award-winning plays have been performed at venues throughout the U.S. and internationally, including the Boston Theater Marathon, The Theatre Cooperative, Provincetown Theater, and Stratford-Upon-Avon Festival. His most recent play (A ROOM IN THE MIDDLE) was produced at the Obie-award winning Metropolitan Playhouse in NYC in 2013.

Image: art by Susan Hardy Brown from her EX HERBARIO series. Susan is a curatorial assistant at the Arnold Arboretum; read a Harvard Crimson article about how that work is intertwined with her work as a multi-media artist.