You are here: Home / environmental art / Second Nature in Provincetown

This month, Second Nature opens at the Provincetown Art Association and Museum. The exhibition, conceived by participating artist Susan Lyman, features work by past Artist Fellows Vico Fabbris and Nathalie Miebach, along with Susan’s paintings and sculptures and woodcut prints by Michael Mazur. The artists grapple with the natural world, bringing “nature” into works of art in arresting ways, such as Vico’s lushly detailed botanical drawings (of completely invented plants and flowers) or Nathalie’s reed sculptures derived from scientific data. We asked Christopher Busa (founder and editor of Provincetown Arts and the curator of the exhibition) about the exhibition’s origins, its artists, and its parallels to the natural world. 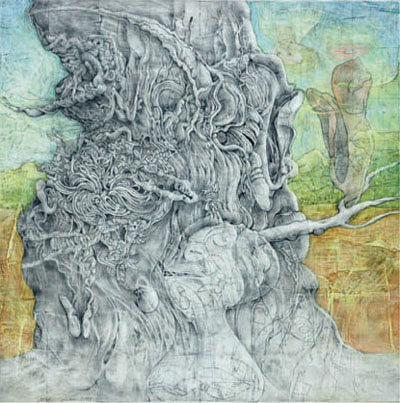 ArtSake: Each artist’s work, despite being thematically linked, is so stunningly unlike the others’. Was that kind of diversity the intentional result of your curation? The natural outcome of putting these four artists together? Some of both?

Christopher: Diversity is simply the recognition of individuality. As Robert Motherwell said, “The only thing I have over any other painter is that I’m the only one who can make Motherwells.” I had an initial title suggestion that suggested global positioning, with the four artists coming from the four quadrants of the planet. So, yes, there was an initial desire to represent diversity in the selected artists.

ArtSake: Michael Mazur agreed to participate in this show in July, shortly before he passed away. Can you talk about his woodcut prints in Second Nature: how were they selected? And how do they speak to his greater body of work?

Christopher: I have written two detailed articles on Mike Mazur that deal with his complex understandings of nature (ed. note: articles appear in the 2006 and 2008 issues of Provincetown Arts). He was working on a final series of nature pieces when he passed away, and those were not available to us. So we took eight works that we could group in pairs.

ArtSake: In the show’s catalog, you note that Vico Fabbris was highly influenced by the 19th-century artists of the Hudson River School, who wanted to record their impressions of the American wilderness before it disappeared. Do you think that same danger – the natural world at risk – is at play in Second Nature?

Christopher: Vico is certainly raising the question you note, and he does it remarkably with his fiction of “extinct” plants, asking how we could know that they never existed. The poet Mark Strand has a poem in the September 24 issue of the New York Review of Books, “The Golden Frogs of Panama”: “And the polar bear and the whooping crane, / And soon the panda and gorilla will be go down, One by one, never to be seen again, / Not by us, not by anyone.” 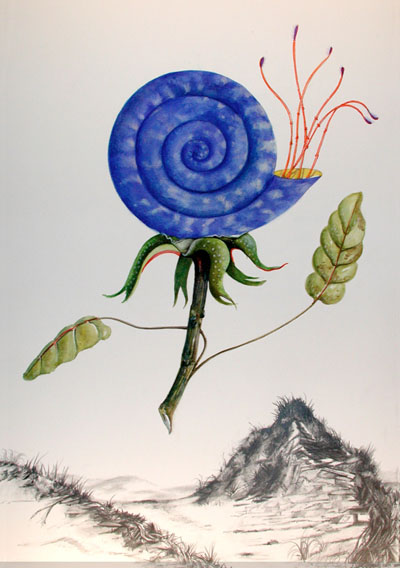 ArtSake: I was fascinated by the Hans Hofmann dictum you quote in the catalog: “The creative process lies not in imitating, but in paralleling nature – translating the impulse received from nature into the medium of expression, thus vitalizing this medium.” What surprised you about the way these artists “paralleled nature” with their creative visions?

Christopher: Regarding Hofmann’s centrality in accessing nature: remember what Hofmann said to Pollock when he first saw his paintings. Hofmann told Pollock, “You don’t paint from nature.” And Pollock replied, famously, “I am nature.” Hofmann encouraged artists, “not to imitate nature, but to imitate nature’s processes,” as he put it in another statement. My father worked with Pollock, and I’ve heard a lot of stories.

ArtSake: The original idea for the exhibition came from participating artist Susan Lyman, in 2006. Can you talk about the path Second Nature has taken, from then to now?

Christopher: When we were deciding on a name for the show, last spring at Susan Lyman’s tree-top living room, Susan had created a list of about thirty possible titles. We came to agreement quickly that “Second Nature” had special resonance in that each artist was mature and had absorbed her or his formative years and created a unique signature, a natural way of doodling that is unmistakably one’s own.

Years ago, I curated a show called Crosscurrents: the New Generation, which included Susan and five other artists. It was an important show. Helen Wilson, Tabitha Vevers, Jim Peters, Susan Lyman, Bert Yarborough, and Richard Baker were in the show, and their works were exhibited at the East Hampton Center for Contemporary Art. Some of the artists and I journeyed there for the opening and a panel talk on the situation, then, in painting. My father was an artist who had a house in East Hampton, and I spent some time there. Jim Peters drove us in his van Bert, Susan, Richard, and myself. We visited Pollock’s grave, and Jim’s young son sang “Impossible Dream.” Susan’s husband, Doug, carried me down the stairs as part of the rescue squad when my back went out from stress of doing the publications that had jammed up and come out in rapid secession. So Susan is dear, and this new encounter of four friends is very life affirming, which nature always shows us.

Second Nature will be on exhibit at the Provincetown Art Association and Museum, October 16 through November 29, with an opening reception Friday, October 16, 2009. There will be a free gallery talk with the artists and curator Christopher Busa on Saturday, October 17, 2009 at 12:20 PM in PAAM’s galleries.