You are here: Home / advocacy / Response to the President’s Proposed Elimination of NEA 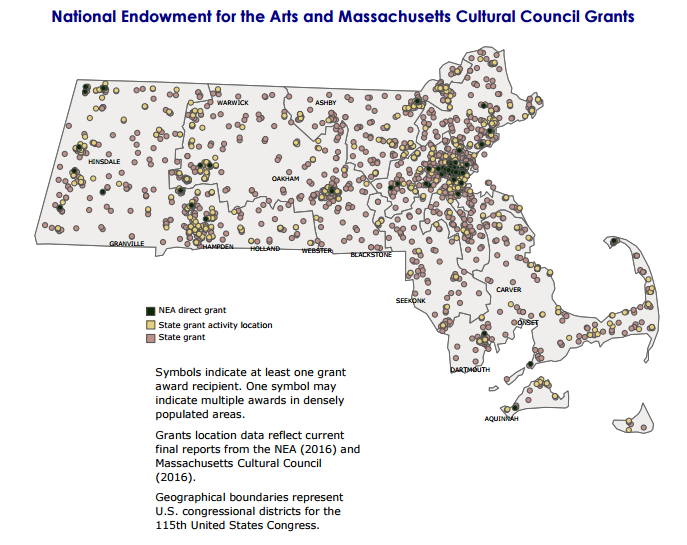 Earlier this month, the President released a budget proposal that included eliminating funding for the National Endowment for the Arts (NEA), the National Endowment for the Humanities (NEH), and the Corporation for Public Broadcasting. On Friday, March 17, Massachusetts Cultural Council Executive Director Anita Walker issued a statement in response. The proposed cuts are “deeply troubling for the Massachusetts cultural sector, which benefits enormously from federal investment through these vital federal agencies and others,” she said.

As seen in the image above, many Massachusetts communities are enriched by cultural funding. “We believe public funding of the arts and humanities is right and essential in a democratic society,” Anita said.

To help protect public funding, you can visit the Americans for the Arts Action Fund, which is enlisting one million arts advocates to mobilize support for the arts and arts education. Membership is free. Learn more.

Also, please consider participating in MASSCreative’s Arts Matter Advocacy Day at the State House on March 28, 2017, to reinforce support for state funding for the arts.

Image: Map indicating where NEA and MCC funds are distributed throughout Massachusetts. Courtesy of the National Endowment for the Arts.