You are here: Home / call to artists / Reflecting on Artist Opportunities 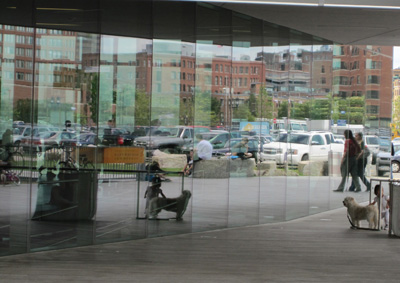 Quit petting me little girl, you’re distracting me. Why must I always wait outside the museum? I love Eva Hesse! -Thoughts from anonymous, a dog tied up outside the ICA, Boston.

Playwrights Cape Cod Community College is continuing its Play with your Food series, featuring local playwrights’ original scripts for workshop readings. All productions take place in the college’s Tilden Arts Center Studio Theater, with a limited dinner menu available for purchase to enjoy during the show. The evening concludes with a talk-back session. Submissions are now being accepted via email for production dates in October 2011 and February/March 2012. Questions: nwillets@capecod.edu.
Deadline: August 26, 2011

Public Art Want to make the experience of waiting for the bus slightly more pleasant for your fellow humans? New York’s MTA Arts for Transit is now accepting applications from artists to create original two-dimensional proposals for the Mother Clara Hale Bus Depot in Harlem. The commissioned artist will create artwork that will be reproduced in fused or laminated glass and/or mosaic along the windows and exterior wall of the building. ArtSake suggests a secretive Red Sox theme to infiltrate enemy territory and give subliminal messages to Yankee fans while they wait for the bus. Just a thought. Questions: artsfortransit@mtahq.org. Read more.
Deadline: August 26, 2011

Film, Video, and Multimedia Entries are now being accepted for the Rencontres Internationales which will be held in Paris at the Pompidou Center on November 18-26, 2011, and in Madrid and Berlin in 2012. The event will feature an international program focused on film, video, and multimedia, gathering works of artists and filmmakers recognized on the international scene along with young artists and filmmakers. Learn more.
Deadline: August 31, 2011

Call for Performance and Art Works Mobius is now accepting submissions and proposals for Momento Mori, a performance and art event that explore the theme of mortality, mourning, remembrance, and memory. This event will take place at the Mobius Alternative Arts Space in Cambridge, MA October 20-24, 2011. Learn more.
Deadline: October 1, 2011

Female Performance Artists Silver Glass Productions seeks female performance artists for second annual New Seeds Festival in Tampa, FL. The festival seeks original, socially relevant performance work across all disciplines. Participating artists will be included in pre-event promotion and their work will be included in post-event follow-up as well as a possibility for their image to be used in next year’s New Seed’s promotion. Learn more.
Deadline: October 15, 2011

Image credit: Photograph of dog outside the ICA Boston by ArtSake.