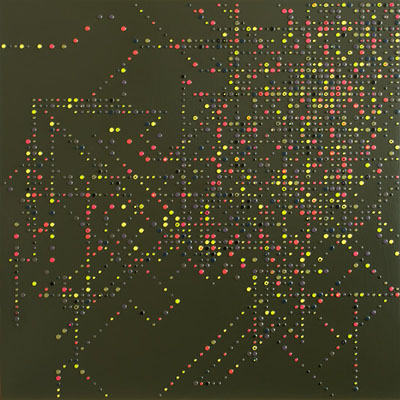 The show features paintings and drawings Reese created through a fascinating process: 1. Design computer software to produce patterns of dots, 2. Select the most intriguing patterns, 3. Then painstakingly render the patterns by hand. What with her emphasis on minute details, we thought Reese would be the perfect candidate for a similarly minute nano-interview.

Reese: I’m in the programming phase of developing a group of new drawing algorithms, and am also developing a new body of paintings mixing algorithmic output (represented as paint droplets) and digitally blurred photographic imagery. Some of the paintings and a selection of burn drawings are on view at Gallery NAGA, Boston through March 28.

MCC: What’s the most surprising response to your art you’ve ever received? 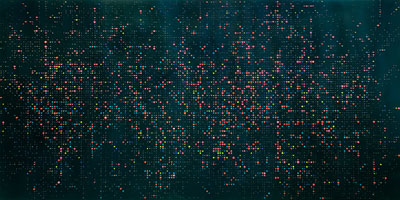 Reese: My work explores and reflects on everyday human interaction with computers. There’s a dialogue between me and the computer in which I write an algorithm, the computer runs it with a good deal of freedom (via random number generation), and then I render the output by hand. Computer process typically has the effect of concealing the programmer, but the hand rendering reinserts visual evidence of human involvement, while staying true to the composition created by the computer.

The opening reception for Remix is tonight (Friday, March 6), 6-8 PM, at Gallery NAGA in Boston. Remix runs through March 28. Along with showing at Gallery NAGA, Reese is part of the group show Blogpix at Denise Bibro Fine Art in New York, March 5-28. Read more Fellows Notes.