You are here: Home / artist voices / Puppetry for a Dancer

Bonnie Duncan is about to premiere Lollipops for Breakfast, a new play for young audiences, at Puppet Showplace Theater (watch a video trailer). Here, Bonnie shares her thoughts on the porous borders between dance, theater, and puppetry, the unique skill sets of dancer/puppeteers, and the intriguing trajectory of her career as a performer and creator. 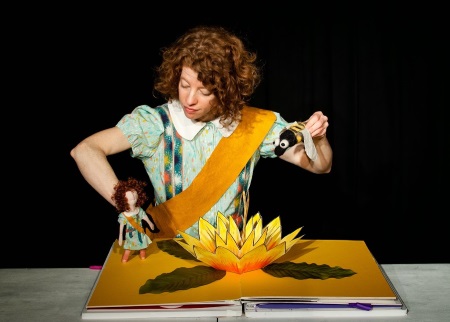 Before becoming a puppeteer, you were a dancer with Snappy Dance Theater. Can you talk about how and why you made the shift into puppetry?
Part of what made Snappy distinctive was that we played so much across lines: it was dance, but it was really theatrical, with acrobatics, physical comedy and even puppetry all thrown in there. That kind of joyful mixture is what drew me to Snappy in the first place. I think Martha Mason (our Artistic Director) saw me as someone who would bring all kinds of art into the group and onto the stage.

In terms of puppetry, that’s something I had been experimenting with even before I joined Snappy. I’d built some of my own puppets and started creating little pieces where I’d perform with them – I really like being onstage, visible to the audience as both a character and a puppeteer at the same time. I’ve had my puppets fall asleep in my arms, snuggle up for a kiss, and even, at the end of one of my favorite pieces, make a bold attempt to strangle me. 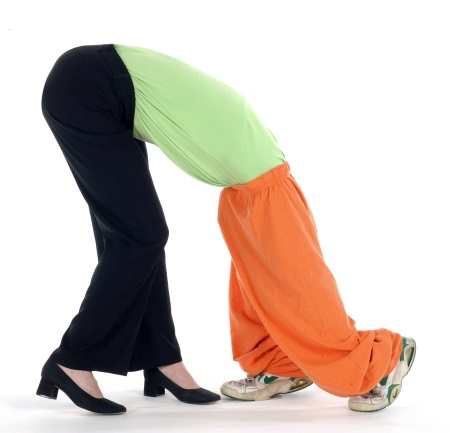 A classic Snappy piece that I performed hundreds of times, Pants (see pic, above), was a perfect combination of dance and puppetry: it’s a duet for two pairs of legs where I play both pairs of legs. It’s a dance piece made for a puppeteer. Or a puppetry piece made for a dancer. Dancers would always ask “how did you make both characters come so alive?!” and puppeteers, “how did you bend that far over??” 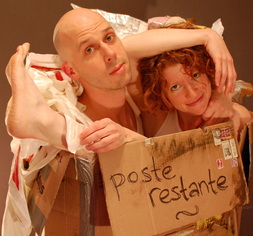 After Snappy closed its doors in 2007, I worked with Tim Gallagher (another Snappy dancer) and we created and toured a show, Poste Restante, that mixed up everything we loved: partner acrobatics, stop-motion animation, puppetry, dance, and theater. We toured that all over, and it was just a joy — we performed in San Francisco, Prague, Austin, New York, and a few hometown runs at the Charlestown Working Theater.

Then, Tim enrolled in medical school in New York City. He was so busy studying that we could only tour our show every once in awhile and I still wanted to make new work and perform. (Tim is now an emergency medicine resident in NYC. Only 3.5 years before we can start on a new show together!)

During my time with Snappy, my interest in puppetry had deepened – I created and performed a slew of pieces at puppet slams; I met puppeteers from across the country at the (totally amazing) O’Neill National Puppetry Conference; I geeked out on brilliant puppeteers (ask me about Philippe Genty or Hugo & Ines sometime!). All of my puppet work, however, had always been for adults.

But then, one day, after Tim had disappeared into med school, a puppeteer friend of mine asked if I had a show for families. She ran a puppet theater and was always looking for new performers.

Her question really got me thinking. At the time, I had a 3 year old and 6 month-old twins at home. I was trying to figure out how to somehow mix kids and art and work and life. The idea of making a show for families and touring it seemed like it could maybe be really great.

So I went for it. With the help from my husband, director Dan Milstein (who had been making original physical theater with his company Rough & Tumble for over a decade), we created a solo show, Squirrel Stole My Underpants, and have been touring it for the last two years up and down the east coast and into Canada.

Many people call Squirrel a “puppet show” but I think of it as a piece of theater for the entire family. Much like Snappy’s work and my show, Poste Restante, it’s a show filled with things I love: puppetry, physical theater, and dance. 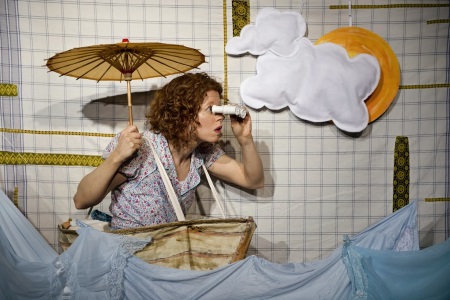 What’s the most surprising response to your art you’ve ever received?
As a performer for young audiences, I often get recognized by kids in my neighborhood. After a series of local Squirrel Stole My Underpants performances, I was walking down a street near my house and a passing kid yelled to his mother, “Mama! I saw that lady’s underpants!”

In a paint ball battle between artists of all disciplines, who wins?
Puppeteers, obviously. We can make amazing things from cardboard and hot glue: our paintball armor would withstand a thousand shots and make a very cool wall sculpture afterwards. Or, we’d build giant puppets to crush our opponents. Either way, we’ve got mad skillz…

If forced to choose, would you be a magic marker, a crayon, or a #2 pencil?
The super sexy #2 mechanical pencil.

Do you live with any animals?
I live with three kids under 6. Does that count? 🙂

Have you ever revised your work on the spot, during a performance (intentionally, I mean)?
Um, I kind of do that all the time. Performing is a live experience and my goal as a performer is to ride the present moment. If I do that, then the performance changes each time. What I love about performing is that the audience is most important unspoken character in the show: I feel like I can read an audience pretty well and shift my performance based on what they are giving me.

Kids are very honest audience members. They giggle with their whole bodies, yell directions (“He’s over there!”) and questions (“When are you going to talk?”), they sometimes even throw their dolls on stage.

Revising the show on the spot is actually a perk of performing solo – I can change things in the moment and not throw anyone off!

Lollipops for Breakfast, created and performed by Bonnie Duncan, premieres at Puppet Showplace Theater in Brookline Village on 1/31/15, 1 PM and 3 PM, and runs through 2/16/15.

Bonnie Duncan is is creator/performer of the puppet plays Squirrel Stole My Underpants! and Lollipops for Breakfast. She is co-founder of They Gotta Be Secret Agents with Tim Gallagher and danced for eight years with Snappy Dance Theater.