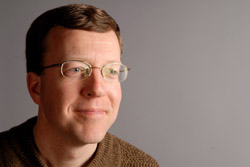 A recently named Huntington Playwriting Fellow, Patrick Gabridge is one of the artists participating in the Emerging America Festival, a collaboration between the American Repertory Theater, The Institute of Contemporary Art/Boston, and the Huntington Theatre to support and launch the new American voices of tomorrow, on May 14-16, 2010.

For the festival, the Huntington invited its Playwriting Fellows to create site-specific audio plays (which you can listen to online or by cell phone). We asked Patrick, an accomplished and deeply engaged Boston-area theatre artist and writer, about his Emerging America play (I AM NOT INVISIBLE) and about various aspects of his intriguing writing life.

ArtSake: Congratulations on becoming a Huntington Playwriting Fellow! Can you talk a little bit about what you hope to take from (and bring to) this partnership with the Huntington and the other Fellows?

Patrick: Thanks. It’s a very exciting opportunity. Right now, I’m meeting every few weeks with the other fellows and the Huntington literary staff (Lisa Timmel and Charles Haugland). For me, it’s a great chance to get feedback on my scripts from some very smart people, and also to see work in progress from some other talented writers, writers whom I have not had a chance to work with before. It’s also an incredibly valuable education about how large institutional theatres work–until now, I’ve mostly worked with small theatres, and the way they operate is different. The folks at the Huntington have been very welcoming, and I appreciate the access we have to see shows and engage in discussions with fellow artists. What do I bring? Hopefully some interesting plays, as well as quite a few years of hands-on experience in making theatre in a lot of different ways. I’m also pretty well connected with parts of the playwriting community in Boston.

ArtSake: One of your first official projects as a Huntington Playwriting Fellow is to write a site-specific audio play for the Emerging America Festival. How did you approach the challenge, and how did you arrive at your premise – a guy cut off at the Stop n’ Shop who refuses to be ignored?

Patrick: I was excited about the challenge. Quite a few years ago, I wrote, produced, and directed a handful of radio plays with a theatre company I’d started in Colorado, and it was great fun. The cell phone plays were a little different, because the audience was going to access the material through a phone, a more personal interaction than radio. And also, they’d be listening to the material in a public space, one that might be more specifically defined, so I could make use of that setting. The other challenge was that I knew I was going to have to perform this myself, and that it would be a solo piece, without sound effects. All of that helped definite the nature of what I thought I wanted to make.

I wrote a bunch of scripts, maybe seven or eight, each with different characters and premises. That’s the nice thing about something so short–if you don’t like it you can’t just toss it out, without sighing and regret. I have a small digital audio recorder that I used to help shape the pieces–I would sit at my desk and record and play them, so I could see if the rhythm and timing felt right.

The piece I ended up using was one that came out while grocery shopping. It was one of those days when it just seemed like everyone in the store was lost in a world of their own–just parking in the middle of the aisles, wandering aimlessly, and it was driving me crazy. It was easy to take that emotion and extrapolate it, and think, what if I was someone even more obsessive than I already am, and a little more ticked off. I could imagine that person following one of the clueless, annoying shoppers out of the store, and then not stopping. It ended up being a piece where I could use language and tense to shift around in time, while also speaking directly and immediately to the listener, and allowing us to arrive at the present in a very specific spot. In a lot of my work, I spend a fair amount of time trying to get an understanding of my audience and the way in which they’re going to experience what I’m creating. 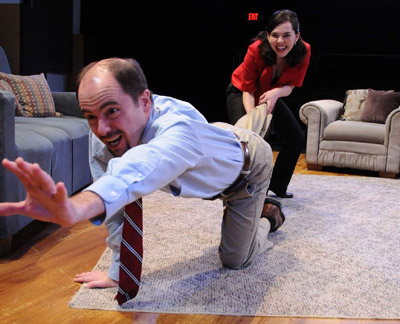 ArtSake: This opportunity also seems to have arrived in the company of a number of other projects – a performance at the American Globe Theatre’s 15-Minute Play Festival, a reading of your play Constant State of Panic at the Boston Playwrights’ Theatre, and an upcoming production in the Boston Theatre Marathon. Do you find that you work well when you’ve got many projects at once (thriving under pressure, you might say)?

Patrick: I like having a lot of productions and projects going on at once, up to a point. The trick is to arrive at some point of balance so that I’m not over committed and feeling overwhelmed, and that I’m still making time to write new material. But there definitely is some sort of happy cloud of creative energy that ends up forming when so many projects are popping. And when I’m working a lot, other projects seem to come my work, because of the zillions of interactions happening, and just positive energy bouncing all over the place. I’m a parent of two kids, so I’m used to multi-tasking.

ArtSake: Along with your work as a writer, you’re involved in the local theatre scene as a founding member of the Rhombus Playwrights’ Group and a board member of StageSource. How important is it to you and your work to maintain that connection with other artists?

Patrick: It’s critical. One of the things I like best about being a playwright is that it involves being part of an artistic community. Interacting with other creative people–actors, directors, designers, and writers–helps feed my drive to write and make new theatre. Theatre is an undertaking that is so intensely social, this complex relationship between artists and audience, and in order to do it well, you need have many active relationships going on at the same time. Rhombus keeps me creating new material at a good clip and basically lets me play with my friends, every other week. The StageSource board shows me a bigger view of the Boston theatre scene and also gives me the opportunity to help design events and programs that are useful for other writers. 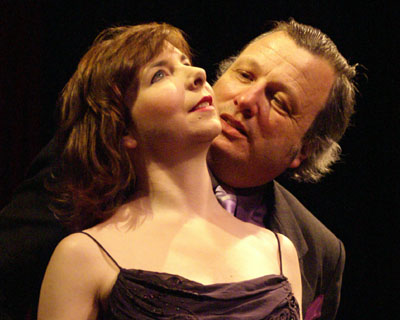 Patrick: In 1990, I was living near New York (in New Jersey), and decided to self-produce my first full-length play off-off Broadway. I partnered with a director to start a small theatre company to produce the show and rented a theatre for a weekend, helped find the cast, designed and built the set, all while in the midst of moving to Denver with my wife, Tracy. The production taught me as much about writing and producing, in the space of about 8 weeks, as I could have learned in graduate school (for less money). That production not only taught me an immense amount, it also gave me the confidence to take similar leaps in the future.

The Emerging America Festival takes place May 14-16, 2010, in Boston and Cambridge. The Boston Theatre Marathon is on May 23, in Boston.

Patrick Gabridge is a Boston-area writer and theatre artist. His plays have been widely published, awarded, and produced in New England and throughout the country. He’s also the author of the novel Tornado Siren. Read his blog about writing, Writing Life x3.