You are here: Home / film/video / Page to Screen 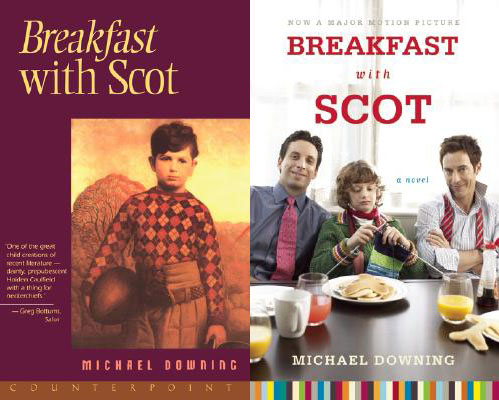 The National Endowment for the Arts has a nifty Writers’ Corner page that lists movies adapted from the books of past NEA fellows. Authors like Sherman Alexie, Jane Smiley, and Tobias Wolff all received NEA support over the years, and at some point saw their work transformed for the silver screen.

When I saw the list, I thought, cool, let’s steal from the Feds.

Well, maybe steal is the wrong word (he says, somersaulting away from federal agents). Let’s say localize. Because Massachusetts has been awarding fellowships to writers since the early ’70s, and along the way, we’ve amassed our own list of writers whose works have been adapted to film.

Now, without getting into the whole, which is better the book or the movie thing (Really? That’s in doubt?), it’s hard to deny that movies bring attention to the books that might not have come otherwise. In discussing the film adaptation of his novel Breakfast with Scot, Michael Downing, a past Fiction/Creative Nonfiction Finalist from MCC’s Artist Fellowships Program, notes that “A heck of a lot more people know about (the novel) because of Tom Cavanaugh’s performance.” (Cavanaugh, known for portraying the title character of the NBC comedy Ed, played the novel’s central character in the film version.)

And if Ed can sell a novel, imagine what Ferris Bueller can do!
It’s interesting to note the chronology behind the book/movie Election by Tom Perrotta (Fiction/Creative Nonfiction Fellow ’98), another past MCC awardee who has leapt from page to screen. Perrotta actually sold the option on Election before the book was published. Momentum from the subsequent film-in-progress by Alexander Payne, starring Matthew Broderick, helped get the novel published in 1998 (the same year Perrotta won an MCC fellowship).

With Perrotta’s rising star came the prospect of more adaptations. But adaptations are tricky things for authors, because for better or worse, stuff from the book often gets changed in the film. Will those changes allow the story stay true to itself? Or will the book get lost in the tinsel?

In his next adaptation, Perrotta took a head-on approach to the issue of changes: he made them himself. As co-writer of the film adaptation of his novel Little Children, he either endorsed any adjustments made to the original story or actually came up with them.

Michael Downing didn’t write his own adaptation, but at least he found filmmakers who shared his vision of Breakfast with Scot. Eventually. When the novel was published, it was swiftly optioned by a major American production company. Michael says he met with the company’s appointed screenwriter, only to learn that the screenwriter felt the movie version needed a “third act.” Michael jokingly suggested he kill off one of the major characters. Readily and without apparent irony, the screenwriter agreed.

Michael’s heart sank. “It just felt so crushingly off the spirit of the project,” he says. Within the year, the company had given up the option, which gave Michael the chance to work with Canadian producer Paul Brown. The book is about two gay men who adopt the son of a deceased friend, and Brown was drawn to the story because of his own experience adopting a child.

That’s not to say the story emigrated to the screen without alteration: in the movie, the story’s setting shifted from Cambridge, Mass. to Canada, and the sport of hockey, nowhere to be found in the novel, became central to the plot. So did these changes bother Michael?

“They just seemed like a good, interesting choices.” He says he was much more possessive of details, tiny gestures or the way an actor would deliver a line taken directly from the book. “And I’d think, that’s not how Mildred would say that!” He adds, wryly, “Though nobody was asking me how to read a line.”

Line readings aside, he says he found the process gratifying (“You’ve got hundreds of people at work on something adapted from your book – it’s not the usual response to one’s work!”), and by the time the film premiered at the Toronto Film Festival, it was nothing but a pleasure. “When my partner and I were sitting in the theatre, and the place went dark, I thought, this is just about the best thing that’s ever happened to me.”

Coming up: Part Two of Page to Screen, with a full list of past fellows’ books with movie adaptations.