You are here: Home / drawing / Of art and luggage: Cambridge Open Studios at Logan 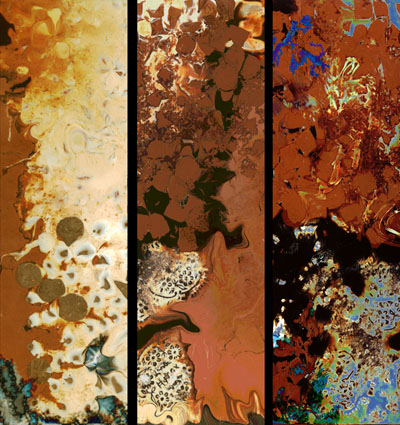 For the next few weeks, travelers in Boston’s Logan International Airport may feel, ever so briefly, like they’re passing through a Cambridge artist studio.

Coordination by the CAC meant not only a larger-scale and more inclusive open studios event, but also distinct benefits for participating artists, according to KD Mernin, one of the curators of the Logan exhibition.

“Being the former chair of NoCa (North Cambridge Arts), putting on that open studios for many years, I know it’s a lot of work,” said KD. “We asked for a big commitment from our membership.” But with the CAC now coordinating the event, that commitment could be redirected – back to the process of making new art.

The scale and demands of a public space like Logan presented some unique curatorial challenges. “Works selected have to be large enough to make an impact on an audience who are in the space for reasons other than art viewing,” said Judith. 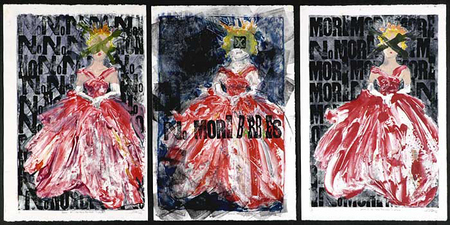 There is, too, an element of randomness in that the art is related by its ties to Cambridge rather than by thematic parallels. But the work is unified by its quality. “It’s a strong group of artists,” said KD, “which shows well for our city and its level of commitment.”

“It was a rare and wonderful opportunity to exhibit our work to more people than is possible with the more typical gallery showings,” said Patricia White.

All three artists have work in the show. Judith’s Toscanini Triptych and KD’s No More Barbies are in Terminal A. Patricia has two abstract monoprints with chine colle, both of which are exhibited in the Terminals B-C Walkway.

Judith’s Toscanini Triptych is uniquely local in that it was created using ingredients from flavors of the Cambridge-based Toscanini’s Ice Cream, which were scanned on a flat bed scanner and “mixed” using digital imaging. Judith may be best known for her impressive ceramics work (in fact, she was chosen to create the MCC’s 2007 Commonwealth Award Object), which have distinctive “flame painted” surfaces. “Some say the digital ice cream images are much like smoke and fire surfaces of my ceramics,” she said.

The Cambridge Open Studios exhibition will be on display at Logan International Airport through September 18. Find more details and full list of participating artists.