You are here: Home / crafts / Obama and the arts – UPDATED 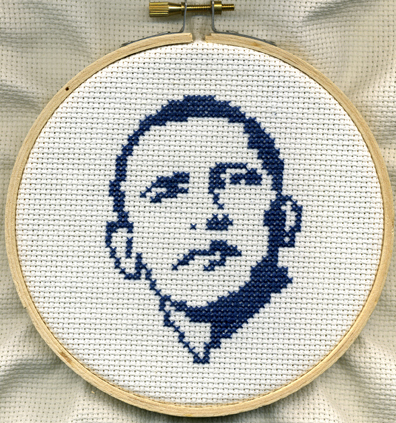 Updated 11/14: responding to my request for Massachusetts Obama art to add to this post, artist and calligrapher Emily Gallardo sent the above cross-stitched Obama portrait. More of her original pins are posted on her blog. Thank, Emily!

Whatever your politics, if you’re an artist or otherwise art-centric individual, you’ll be glad to hear that President-Elect Barack Obama has a vigorous arts policy.

In an October Bloomberg article, Americans for the Arts president Robert L. Lynch said that no candidate in recent history has crafted such a detailed arts platform. Obama’s arts ambitions include creating an Artist Corps to work with low-income schools and communities, increased funding to the National Endowment for the Arts, focus on healthcare for artists, and tax fairness (allowing artists to “deduct the fair market value of their work, rather than just the costs of the materials, when they make charitable contributions”).

He’s publicly made the case for arts education. And it bodes well that by the day after the election, he’d already named a leader for the transition team overseeing cultural agencies: Bill Ivey, who has led the NEA and the American Folklore Society. (I should note that he named all his transition teams on that Wednesday. But at least he didn’t leave the arts for day two!)

Many artists have reacted to Obama’s arts support with a right-back-atcha. There were countless artistic efforts in support of Obama’s candidacy, from street art to literary and visual art auctions to benefit concerts. There is an Arts and Creative Industries for Obama website. Artists made YouTube videos.

Perhaps most encouraging is knowing that arts luminaries like novelist Michael Chabon, a member of the policy committee, has Obama’s ear when he says things like:

America’s artists are the guardians of the spirit of questioning, of innovation, of reaching across the barriers that fence us off from our neighbors, from our allies and adversaries, from the six billion other people with whom we share this dark and dazzling world. Art increases the sense of our common humanity. The imagination of the artist is, therefore, a profoundly moral imagination: the easier it is for you to imagine walking in someone else’s shoes, the more difficult it then becomes to do that person harm.