You are here: Home / artist voices / Noritaka Minami: Visions of a Lost Future

Photographer Noritaka Minami creates captivating photography exploring visions of architecture and urban building – visions of a future that never materialized. Work from his 1972 series will be exhibited in the group show Fertile Solitude (Oct 14-Dec 18), opening at the Boston Center for the Arts Mills Gallery on Friday, October 14, 2016, reception 6-8 PM.

We asked the artist about Fertile Solitude, the 1972 series, and other turns and surprises in his photographic explorations. 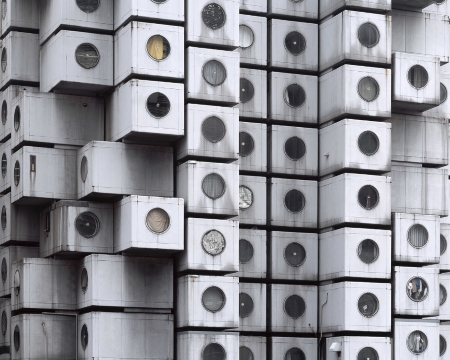 Your projects often explore spaces for which architectural or land use plans have gone in directions that weren’t intended. Can you talk about what draws you to these “unintended” spaces?
In the case of the project 1972, I became interested in the current state of the Nakagin Capsule Tower because it proposed a distinct vision of the twenty-first century that never arrived in the city of Tokyo. In the year 1972, Kisho Kurokawa (the architect of the building) and the Nakagin Mansion Company (the real estate firm that commissioned the building) proclaimed that society was at the “dawn of the capsule age.” Despite this proclamation, this style of building construction did not become popular in Japan. More importantly, the capsules on the tower have never been replaced, even though they were intended by Kurokawa to be replaced every 25 to 30 years as a process of carrying out the building’s “regeneration.” Through photography, I wanted to examine a vision of the future that was imagined to be possible in 1972 and how that vision of the future appears in retrospect. The Nakagin Capsule Tower also allows us to reflect on the actual trajectory taken by the city of Tokyo since 1972. This interest in the limits of foreseeing the future is also the basis of my other recent projects. 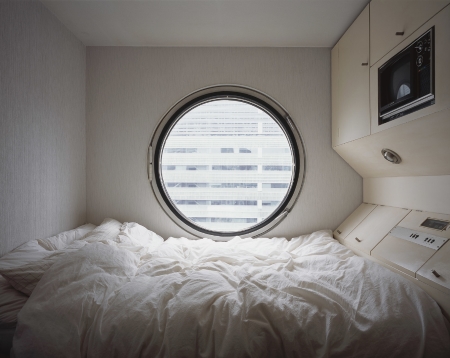 What are the project’s origins?
I initially came across the Nakagin Capsule Tower in 2010 through my interest in the 1970 World Exposition, which is commonly known as Expo ’70. Metabolism, an influential post-war Japanese architectural movement that formed at the 1960 Tokyo World Design Conference, played a key role in creating a “city of the future” at the Expo. Yet, there are very few traces of this city left today at the former site of the event. I think that’s why I gravitated towards the Nakagin Capsule Tower. It is one of the few proposals realized through the Metabolism movement that is still standing in this world. The project also began with a sense of urgency to document the building. In 2010, there was a very real possibility that it would be demolished and replaced with a more “conventional” apartment complex to maximize the value of the real estate on which it stands. As of today, the building still faces an uncertain future in regards to its preservation.

How do you see your work in conversation with the other art in Fertile Solitude?
My project documents a building that was conceived by the architect Kisho Kurokawa as a space for businessmen to find respite and rejuvenate from the increasingly rapid pace of life in the city in the post-industrial age. The photographs do show that the capsules still function as a type of shelter from the giant metropolis that exists immediately beyond the circular windows. I am very interested in how my photographs interact with the works of other artists in the exhibition, especially in the “maze” that is being specially designed for the gallery by the curator Elizabeth Devlin. I believe the variety of approaches taken by the artists in this exhibition to address the chaotic nature of contemporary life only reinforces the value of finding introspection. Furthermore, the exhibition will show that this idea of finding introspection comes in different contexts and forms. 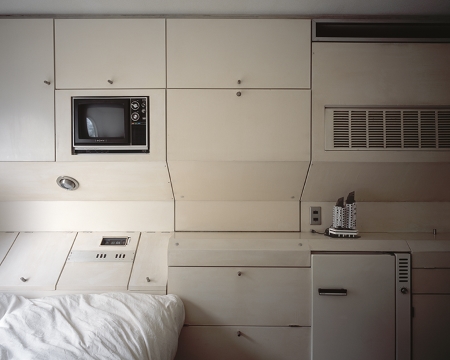 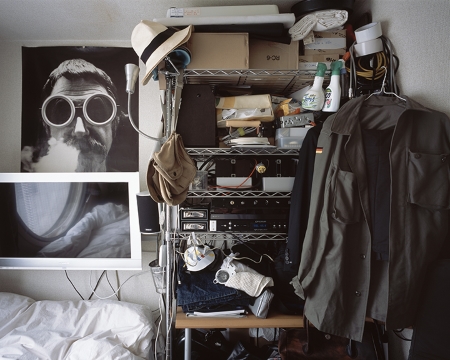 What artist do you most admire but work nothing like?
I can name many artists I admire that my work has no apparent resemblance or connections to their practices. One example that I can name off of the top of my head is the photographer Rinko Kawauchi because I recently talked about her work in my class at Loyola University. Her photographs, especially from the early books, are stunning. The photographs almost come across as being simple and effortless. Yet, I would have no idea how to make those photographs even if I tried. They’re only possible through her distinct visions for the photographic medium and looking at the everyday. Her photographs highlight the importance of observation and the question of how to translate that act into a photographic image.

What’s the most surprising response to your art you’ve ever received?
It is gratifying when a viewer points out the idea of time in relation to my photographs of the capsules. My project takes into account the history of the capsules as units originally made on an assembly line with similar specifications to enable mass production. In my photographs I use that history of the architecture to highlight the distinct characteristic that now exists within each capsule today, whether it is through the occupancy of the current resident or the modifications that were performed over the course of four decades. Each capsule contains the history of not only the current resident, but also other individuals who have come through that space since 1972 and the decisions they made in regards to that unit. Maybe it’s possible to view the additions, subtractions, modifications, and renovations that were performed inside a capsule as traces of an individual or individuals. It is nice when people look at the details present in each unique space, which is why I took the photographs. 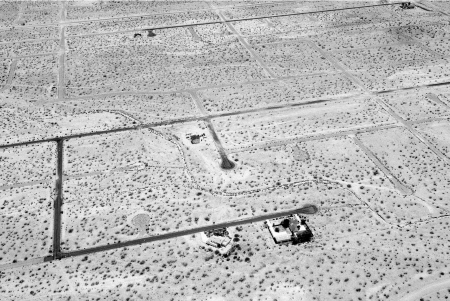 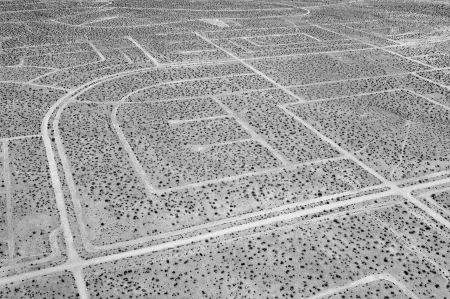 What’s next?
I am currently making a work on California City, California, a master planned community in the Mojave Desert conceived by Columbia University trained sociologist turned real estate developer Nathan K. Mendelsohn in the 1950s. The city was intended to become the next major metropolis in California in response to the unprecedented population and economic growths the state experienced following World War II. Mendelsohn and his associates carefully designed the layout of 186.5 square miles of land that is still technically the third largest city in the state in terms of area size. However, most of Mendelsohn’s vision for this city has not been realized to date, despite an extensive network of streets that has already been constructed on the site. I am interested in this landscape that is seemingly suspended in time: clearly being built to host a future city but with no certainty if that city will ever materialize in reality. 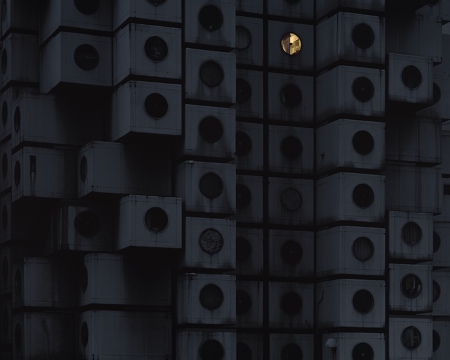 Noritaka Minami is among the artists exhibiting in Fertile Solitude at the Boston Center for the Arts Mills Gallery Oct 14-Dec 18, opening reception Friday, October 14, 2016, 6-8 PM.

Noritaka Minami‘s photography has exhibited at UCLA Department of Architecture and Urban Design, Center for Photography at Woodstock, and Griffin Museum of Photography. Forthcoming solo exhibitions include the Reischauer Institute at Harvard University and Kana Kawanishi Gallery in Tokyo, Japan. He is a recipient of grants from the Pollock-Krasner Foundation, the Graham Foundation for Advanced Studies in the Fine Arts, and Center for Cultural Innovation. His 2015 monograph 1972 – Nakagin Capsule Tower (Kehrer Verlag) received the Architectural Book Award from the Deutsches Architekturmuseum. Currently, he is Assistant Professor of Photography at Loyola University in Chicago.