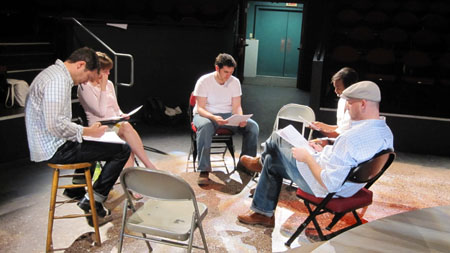 In Boston, there’s a bold expedition into the wilds of new theatre. Company One, already a frequent producer of new works, has announced a fresh initiative: the C1 Lab. It’s a program for the creation of collaboratively developed “original, must-see theatrical events.”

The troupe has a history of collaboratively-developed work, including The Emancipation of Mandy and Miz Ellie and GRIMM (which we wrote about here and here, respectively). The C1 Lab differentiates from other new play development programs through its focus on collaboration and its outreach to artists in varied disciplines.

Company One invites visual artists, musicians, filmmakers, multi-media artists, and more, in addition to playwrights, to submit projects for development. Projects can range from a song cycle to a visual installation piece to a story that hasn’t been told before, and beyond. In short, anyone looking to embark on a daring artistic adventure and create innovative live performance is someone Company One is looking to work with… The dynamic of the program will meld methodology of experimental ensemble-created pieces with established play development techniques of readings and workshops and create new ways of bringing artistic concepts to life.

With C1 Lab joining the new play focuses at the Huntington Theatre, Boston Playwrights Theatre, Barrington Stage Company, and Wellfleet Harbor Actors Theatre (to name just a few), we’d tend to agree with Company One Artistic Director Shawn LaCount that “this is a very exciting time to be making theatre” in Massachusetts.

Elsewhere in the country, the map for new plays is expanding – literally. The American Voices New Play Institute at Arena Stage has announced the release of The New Play Map. It’s an online mapping tool that serves as a aggregator of production info, videos, blogs, and other content relating to new plays. It’s a way to collect – and visually map – the terrain for new theatre in America.

Incidentally, the Institute has a host of opportunities for theatre artists, including playwright residencies, fellowships for future theatre leaders, and a partnership with the NEA’s New Play Development Program. This month, the Institute will convene From Scarcity to Abundance: Capturing the Moment in the New Works Sector on January 26-29 in Washington, D.C. The event will explore current new play resources, identify needs, and work to create collaborative ties to improve the infrastructure for new American plays. Many of the convening’s events will be livestreamed on NewPlay TV, so interested artists unable to attend in person can still participate. The Institute is encouraging organizations and like-minded artists to band together for “watch parties” to carry forth the event’s goal of making in-person connections.