You are here: Home / artist voices / Nano-interview with Suzanne Matson 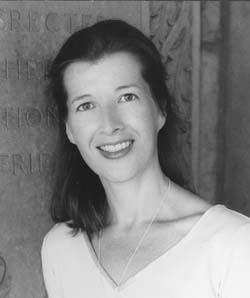 This is one in a series of extremely brief interviews with participants in the Commonwealth Reading Series.

Suzanne Matson, the next writer to brave the Q&A shrink ray, reads on Thursday, January 8 at Grub Street in Boston, at 7 PM.

Accomplished as both a novelist and a poet, Suzanne has a uniquely thorough perspective on the writing craft – and, it turns out, on the sport of paintball.

Suzanne: An historical novel about a family of immigrant, socialist Finns against a backdrop of WWI politics. But it also has a great love story.

Suzanne: I really like reading novels of epic sweep–Tolstoy, Dos Passos, and the like. I wish I could do Epic Sweep, but I end up getting engrossed in closely focused character fiction–although my last novel, The Tree-Sitter, and my current project, The Liberty Committee, are very interested in social and political contexts.

Suzanne: Most of them end up in my cyber trash bin, so I can’t remember, but as an undergraduate, I had the honor of having W. S. Merwin poke fun at the first line of a poem I had written: “Winter walks the china sky.” He really didn’t like that line.

Suzanne: My sons, who play paintball, are sure the prose writers would cream the poets. They seem to think poets are too dreamy to get a bead on a target. As someone who writes in both genres, I’m not so sure they’re right: Poets are very attuned, as Ezra Pound once said, to the “pith and gist” of things. That might translate into sharp-shooting talent. Although novelists, used to thinking in plots, might best the poets in battle strategy.

Suzanne joins Kim Adrian, Ben Berman, Xujun Eberlein, and JD Scrimgeour for a reading on Thursday, January 8, 2009, 7 PM at Grub Street, 160 Boylston Street, Boston MA. Read about all of the events in the Commonwealth Reading Series.

Suzanne Matson is the author of three novels, most recently, The Tree-Sitter, and two books of poetry. A professor of English and creative writing at Boston College, she lives in Newton with her husband and three sons. Her full list of works is at www.suzannematson.com.