You are here: Home / artist voices / Nano-interview with Michael Downing 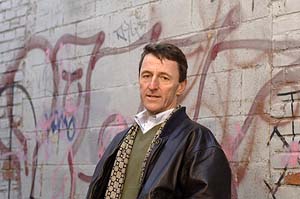 This is one in a series of breathtakingly brief interviews with participants in the Commonwealth Reading Series.

Michael’s work in fiction and nonfiction, along with being highly acclaimed, has led to awards, a play, a movie, a surprise footwear-related gig–and now, to a miniaturized interview.

Michael: That’s easy: “I am writing a memoir.”

Michael: Writing is definitely the best/worst day job I’ve ever had.

MCC: What’s the most surprising reader response you’ve ever received?

Michael: I was asked to be a spokesperson for National Flip-Flop Day. Really. Even more surprisingI accepted.

Michael joins Rebecca Kaiser Gibson, Rachel Kadish, and Joan Wickersham for a reading at Porter Square Books in Cambridge, Tuesday, February 10, 7 PM. Event co-sponsored by AGNI Magazine. Read about all of the events in the Commonwealth Reading Series.

Michael Downing’s novels include the national bestseller Perfect Agreement and Breakfast with Scot, which was adapted as a movie that premiered at the 2007 Toronto International Film Festival. In addition to Shoes Outside the Door: Desire, Devotion, and Excess at San Francisco Zen Center, a narrative history of the first Buddhist monastery outside of Asia, Michael’s nonfiction includes the revised 2009 edition of his history of clocks, Congress, and confusion – Spring Forward: The Annual Madness of Daylight Saving Time, and a memoir, I’ll Make It Up to You, which will be published in October 2009. His essays and reviews appear in the New York Times, Washington Post, Wall Street Journal, and other periodicals. He teaches creative writing at Tufts University.