You are here: Home / artist voices / Nano-interview with Lisa Nold 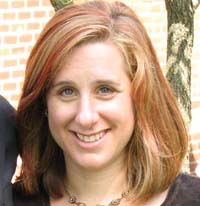 This is one in a series of drive-through interviews with participants in the Commonwealth Reading Series.

Lisa joins the fray with an impressively harrowing worst day job (the worst yet, I think!), and brings the poets vs. prose writers paintball predictions to two votes for poets, one vote for prose writers, and one no-contest.

Lisa: Prose writers because they tend to be aggressive and competitive. I imagine that the poets would find a place behind a tree to casually smoke cigarettes while admiring the vermilion and yellow splats accumulating on their clothing. Of course, they would be the ultimate winners.

Lisa: About as many revisions as there are dollars in the current economic stimulus package.

MCC: What’s the worst day job you’ve ever had?

Lisa: I worked as a temporary secretary transcribing tapes at Bellevue. This was in the late 1980s just after a doctor had been stabbed to death in a nearby stairwell. There was also an issue with communicable diseases on my floor and I remember leaning down to take a sip from the water fountain and someone crying out from behind me, “Don’t drink from that fountain!”

Lisa joins Steve Almond, George Rosen, and Tracy Winn for an event at Porter Square Books on Thursday, February 5, 7 PM. Event co-sponsored by Harvard Review. Read about all of the events in the Commonwealth Reading Series.

Lisa Nold earned a MFA from Syracuse University and has published her fiction, non-fiction, and poetry in Guernica Magazine, Fulcrum and Rosebud, among other literary publications. She is a recent fellow at the Santa Fe Art Institute and is former managing editor at Harvard Review and Fulcrum: An Annual of Poetry and Aesthetics. She is currently at work on a collection of short stories.