You are here: Home / artist voices / Nano-interview with Kim Adrian 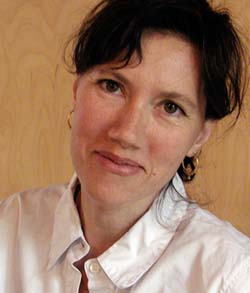 This is one in a series of nano-interviews with participants in the Commonwealth Reading Series, featuring literary fellows and finalists from our Artist Fellowships Program.

Kim Adrian, the next writer to generously take part, reads on Thursday, January 8 at Grub Street in Boston, at 7 PM.

Kim is an essay, memoir, and short story writer (read a story of Kim’s published in AGNI) whose answers to absurdly brief interview questions are as intriguing and idiosyncratic as her wonderful prose.

Kim: A memoir called “The Oyster’s Autobiography” and a short story about a boy with a limp called, at least for now, “Why Dim Sum Makes Me Feel Tender.”

Kim: The best was at a bakery in Cambridge… I loved getting up at 5 am & biking over the Charles when nobody was on the road but truckers, & I loved rolling out baguettes & drinking cappuccino with my boss, working together in silence. The worst was as a cashier at DeLuca’s market on Beacon Hill. People were rude & my feet killed from standing all day. Most of all it was suicidally boring. I only lasted one shift.

Kim joins Ben Berman, Xujun Eberlein, Suzanne Matson, and JD Scrimgeour for a reading on Thursday, January 8, 2009, 7 PM at Grub Street, 160 Boylston Street, Boston MA. Read about all of the events in the Commonwealth Reading Series.

Kim Adrian has work forthcoming in Tin House, Ninth Letter, and the Raritan Review. Her essays and short stories have appeared in AGNI, The Gettysburg Review, Tin House, Crazyhorse, the New England Review, and elsewhere. In 2008, she received a P.E.N. New England Discovery Award in fiction; and an excerpt from her memoir-in-progress, “The Oyster’s Autobiography,” won the Editors’ Prize in nonfiction at the New Ohio Review. She lives in Brookline, Massachusetts.