Imagine for a moment the Hudson River School painters depicting the immense magnificence and power of nature. Now think about the primitive power of loud, guitar-driven grunge, punk and metal music. Combine them, and voila, Joe Wardwell (Painting Fellow ’12) has struck a gnarly power chord with his bold paintings. Take a listen with your eyes: 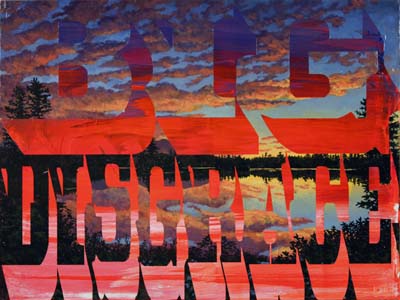 What do you listen to while you work? I listen to pretty much everything but I would say the most common genres that I indulge in would be stoner metal or doom metal with a little psych rock thrown in. I have had a serious long term relationship with early Black Sabbath and have been a long term devotee of “The Melvins” and “Earth.” Recently have been obsessed with a Japanese band named “Boris.” “Boris” is an amazing band that is great studio music but have also have been a source of inspiration for my work.

How loud? Very. The music I listen to needs to be loud and luckily at my studio I can play it really really loud.

What artist do you most admire but work nothing like? Tom Friedman. Rodney Graham.

What are you currently reading? 1Q84 by Haruki Murakami, I have about 200 pages left. Murakami is one of my favorite authors. 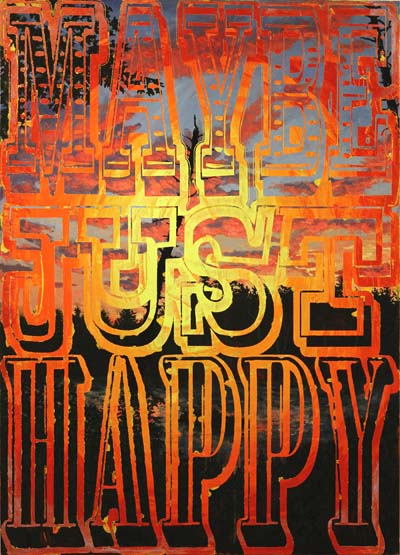 Have you ever revised your work on once it’s been hung in an exhibition? Not yet. Once it is done and been up somewhere it always feels complete after that. When I just finish the painting, I feel like there are tons of mistakes that if I had more time or I was a better painter I would be able to fix. It is a totally defeated state. Then after it gets shown, or have decided it is done and sits around a while. I can’t really see what was getting to me so much and the painting usually feels as it should be.

Do you secretly dream of being a) the fifth Beatle? No, I went straight from my dad’s Willie Nelson records to hardcore punk to metal to grunge and then out into the abyss. Never had a Beatles phase, never owned a record and probably never will.  b) a tax collector, No
and/or c) a paperback writer? Definitely.

Which color(s) do you least like? It’s the spectrum. Love it or leave it.

The unauthorized biography of your life is titled: “Never liked the Beatles”

What’s next?  In the studio, I have been most excited by the larger paintings that are on view at the deCordova and LaMontagne Gallery. They just feel right. I am planning on continuing to develop this body of work. The work feels like it has been gathering momentum for a while now and I want to run with it as long as I can. As far as exhibitions go, I am planning to do a show sometime in 2013 in Seattle at Prole Drift Gallery. The gallery is run by the amazing Dirk Park who organizes Aqua Art Miami with his wife and artist Jaq Chartier. Having lived in Seattle for a long time I am very excited to show back in the home town.