You are here: Home / artist voices / Nano-interview with Elizabeth Hughey 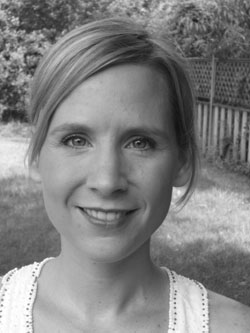 This is one in a series of thumbnail interviews with participants in the Commonwealth Reading Series.

Liz is an Alabama native, a maker of vital, luminous poems, and, if this blog post is any indication, a very witty answerer of questions, nano- or otherwise.

Liz: I am working on two chapbooks, “Oaxaca” and “Etiquettes.” “Oaxaca” grew out of some confusion with how to find a place I had no idea how to spell. The poems in “Etiquettes” sort of reside and float around in the landscapes of the different editions of Emily Post’s “Etiquette.”

Liz: “Utter the word sandwich a couple of times: sandwich, sandwich becomes which sand, which sand.”

Liz:
Through Sanderson
crept the muscle
(tinted, gray-green)
of Caprice. Windows
urged his body
toward the every
“not to” in him.

MCC: Whats the best/worst day job youve ever had?

Liz: Best: Traveling to International Book Fairs (Frankfurt, London) to sell the rights to translate books into different languages. Worst: Administrative assistant to a team of four young, male investment bankers during the dot com boom in San Francisco. I just wasn’t very good at it. I flew one guy to the wrong city in Texas for a meeting.

MCC: The unauthorized biography of your life is titled:

Liz joins DM Gordon, Bill Peters, and Michael Teig for an event on Wednesday, February 25, 2009, 7 PM, at Forbes Library in Northampton. Event co-sponsored by Mass Humanities. Read about all of the events in the Commonwealth Reading Series.

Elizabeth Hughey is the author of Sunday Houses the Sunday House, which won the 2006 Iowa Poetry Prize. Her new work is published or forthcoming in Zoland Poetry, Lungfull, Left Facing Bird and Caffeine Destiny. Born and raised in Alabama, she now lives in Montague, Massachusetts with her husband, Chip Brantley, and their son, Angus.