You are here: Home / artist voices / Nano-interview with Christopher Faust 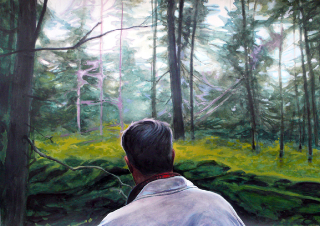 Reams of paper have been used to write about the concept of the gaze in painting. This is a nano-interview, so we’re not going there. Instead we’re honored to have artist Christopher Faust (FY10 MCC Painting Fellow) take us on a quick ride into his mind. Let’s see what he has to say.

What artists’ work do you admire most but create nothing like? Paul Pfeiffer at the moment. He’s got a real straightforward and hardworking approach to the material/medium of video that’s fearless. He’s not afraid of months of work for just a few minutes (or less) of footage.

If forced to choose, would you be an eraser or a permanent magic marker? Definitely a kneaded eraser.

What is the most surprising response to your art you have ever received? I had someone point out to me that there was something wrong with my composition – that the figures were too in the middle. When I told him I knew that and I did it on purpose, he kind of got angry and confused, then he stopped talking to me. I also had a piece stolen recently from a show.

Do you live with any animals? Yes, we have a mixed pit bull named Tessa. She looks tough as hell, but she’s all comedy… crazy smart and great around kids. She’s a rescue and I think she was abandoned because she had no fight in her. 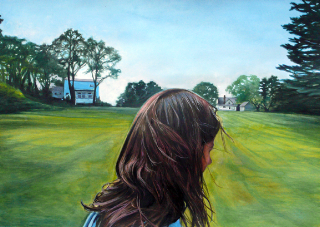 How do you know when your work is done? I don’t, really. I mean I figure it out, because I get to a point where it doesn’t need anything more. I sometimes sit on pieces for months without working on them because I just can’t figure out what’s wrong, then I force myself to work and finish the piece. It’s just hard work, really.

What do you listen to while you create? All kinds of stuff. Lately I’ve been listening to a lot of Zeppelin. Most often nothing at all.

What films have influenced you as an artist? David Cronenberg’s first film, “Shivers” – just a great disconnected tone and amazing images. Also the last scene of Days of Heaven when Linda Manz is running and you just see her face from the side and this crazy blue/ green light (at least that’s my memory of it). The first scene of Solaris (Tarkovsky’s) where he’s staring at nature before he leaves for the space station….but mostly I see films to escape and they have nothing to do with my art. I love all zombie movies, Dune (David Lynch!) Jaws (every Memorial Day) and all sci fi- the recent Battlestar Galactica being at the top of the heap. 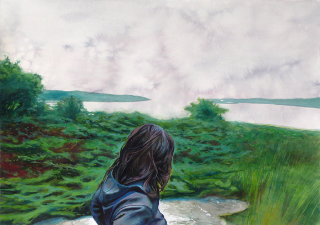 What are you currently reading? “Altered Carbon” by Richard K. Morgan

Spring, Summer, Winter or Fall? Can’t choose on that one – I’m from New England.

What has the MCC Artist Fellowship meant to you? Recognition. I moved back here from New York City after 13 years because I missed it, and to receive this award here, in Massachusetts, has meant a lot to me and made a huge difference in my life. The money’s nice but it means more to me to be recognized in a place where I really want to be.

Christopher will participate in small works invitational exhibition showcasing the works of eleven Massachusetts artists recognized by the MCC’s Artist Fellowship Program. Painted Visions will be at the Cultural Center of Cape Cod from July 13- August 8, 2010. The opening reception is Saturday, July 17 from 5-7 pm.