You are here: Home / artist voices / Nano-interview with Caroline Klocksiem 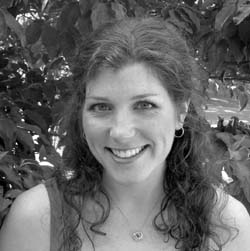 This is one in a series of flash interviews with participants in the Commonwealth Reading Series.

So far, we’ve had three superb events in the Commonwealth Reading Series and 12 nano-interviews. And with two more readings to go, poet Caroline Klocksiem makes it lucky 13.

Caroline, who reads at Amherst Books on Tuesday, February 17, 8 PM, is a poet, literary journal editor, and the first artist to appear on this blog (to my knowledge) equally conversant in the criminal and the liminal (with training in forensics and poetry, respectively).

Caroline: Pretty much what every writer’s working on… creating one manuscript while looking for a publisher for another. I’m also working on my push-up and bowling form.

Caroline: There’s probably a ton of correct answers, but right now I’m thinking Miklos Radnoti. He’s long been one of my favorites, but I don’t believe anyone would read my poems and then think, “ah, she’s read Clouded Sky a dozen times!” I’m amazed at his complicated relationship with language–as a means of witnessing and testament, survival, hope, re-making, escape… there’s this wonderful “nothing to lose” quality that makes his work such a privilege to read.

MCC: Whats the most embarrassing sentence/line of poetry youve ever written?

Caroline: I don’t know, but I suspect they are plentiful, and involve words like “cerulean” and “zephyr.”

MCC: Do you secretly dream of being a) a pop icon, b) an algebra teacher, and/or c) a crime-solver/writer a la Jessica Fletcher?

Caroline: C! In college, I was the only poet in my forensics class.

Caroline: Not on purpose.

Caroline joins Noy Holland, Elizabeth Porto, and Susie Patlove for an event at Amherst Books in Amherst on Tuesday, February 17, 2009, 8 PM.. Co-sponsored by jubilatand Juniper Initiative. Read about all of the events in the Commonwealth Reading Series.

Caroline Klocksiem grew up in South Carolina, studied Creative Writing at the University of Tennessee-Chattanooga, and received an MFA from Arizona State University. In addition to a Massachusetts Cultural Council fellowship, she has received a Swarthout Award and a grant from the Arizona Arts and Letters Commission for her writing. She teaches college English and co-edits the online literary magazine 42opus. She thanks Drunken Boat, Spinning Jenny, Hotel Amerika, and Slurve Magazine for publishing her most recent work.