You are here: Home / artist voices / Nano-interview with Ben Berman 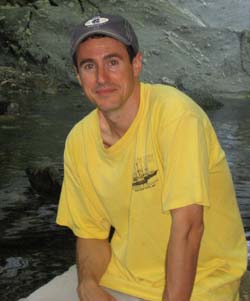 In January and February, we’re putting on the Commonwealth Reading Series, featuring literary fellows and finalists from our Artist Fellowships Program. The readings will include both poets and prose writers and will be, to mix vernaculars, all milieus of awesome.

To promote the readings, the participants were invited to take part in miniaturized versions of interviews. The first to do so is poet Ben Berman. Ben will read on Thursday, January 8 at Grub Street in Boston, at 7 PM.

Reading Ben’s answers, I suspected he had a bit of Marx Brothers in his worldview. So I asked, and he confirmed.

MCC: What’s the most surprising reader response you’ve ever received?

Ben: A student once told me that my ears look like they’re made of wax.

Ben: The poets paintball is an amateur sport no place for pros.

Ben joins Kim Adrian, Xujun Eberlein, Suzanne Matson, and JD Scrimgeour for a reading on Thursday, January 8, 2009, 7 PM at Grub Street, 160 Boylston Street, Boston MA. Read about all of the events in the Commonwealth Reading Series.

Ben Berman has received honors from the New England Poetry Club and has been nominated for the Pushcart Prize three times. His poems have been published in Salamander, The Cimarron Review, Cream City Review, Connecticut Review and other journals, as well. A former Peace Corps Volunteer and high school English teacher, he now coaches Humanities teachers in the Boston Public Schools.