You are here: Home / artist voices / Monica Raymond, on the Fascination of What’s Difficult

Monica Raymond, a past MCC awardee in both Playwriting and Poetry, recently took part in an 18-month residency at Central Square Theatre as one of the PlayPen Playwrights.

Tomorrow (Tuesday, November 27, 7 PM), her play The Owl Girl will have a reading with Ken Baltin, Stephanie Clayman, and others at the Central Square Theatre.

We caught up with Monica to ask about her plays, her many-faceted art, and her view of things locally and abroad as a widely accomplished multidisciplinary artist.

ArtSake: Can you discuss the journey of The Owl Girl – what inspired it, how it’s developed, and how it’s changed (or not) as actors and other collaborators have been involved? 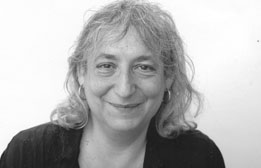 Monica: I first got the idea for The Owl Girl when I was working on audience development for Occupied Territories, which we did at Boston Playwrights Theater in 2004. Occupied Territories was an evening of short works about the Middle East – three by Jewish Americans (Saul Slapikoff, Barry Oshry, and me) and one monologue written and performed by Palestinian American Soha al Jurf. Saul Slapikoff produced it, and the late Ted Kazanoff directed.

In the process of getting people to come out for these the performances, I met with David Dolev, an Israeli who was living in Cambridge and running Muslim-Jewish dialogue groups here. And he told me that there were families in the West Bank who still had the keys to the houses their families had lived in before 1947.

That was the seed that led to The Owl Girl. I knew it was going to be about two families that both had keys to the same house, and wind up living in it together. I decided to make them two symmetrical families, each with a father, a mother, one male child and one female child, and the characters were originally called “A Mother. A Father. Another Mother. Another Brother.” and so forth. The play’s original title was Parable.

I started the play. I thought it would a political play, maybe a psychological one. But when Joze, the exiled brother with a gift for peace, comes back to his old house and meets Stel, the daughter of the family that’s living in it now, he tells her “I’ll tell you something strange about my sister. It used to be that we were quite close in age. She was only a year and a half younger than I. But, at a certain point, I kept on growing, while she has stayed just thirteen.”

At that point, I thought “Hey, wait a minute! What’s going on?” I hadn’t intended this to be a magic play. I had to put it aside.

Then I had a commitment from Len Berkman at Smith (where I went to grad school) for a slot in their New Play Reading Series. I had a couple of things I’d started, and I asked him what I should work on. And he said “Do something with a lot of characters. That way we have lots of parts for students, and they bring their friends, and we have an audience.” At that point, there was even a ninth character, a neighbor who spies on them. So I wrote the first act for that reading, sending Chris Rohmann, who was directing it, new pages almost every day. That winter I finished the draft and submitted it to the Clauder Competition. It won the Clauder Gold Medal, and I had a week to work on it with trained actors. Dan Burson, the literary manager at Portland Stage, was tremendously helpful in thinking of ways to rearrange the second act so that the suspense keeps building and the changes keep coming. I did a lot of work on the script during that week, and I tweaked it a little more when I got back. Since then, the shape of the script has stayed essentially the same.

I did make a couple of small but important changes since. On the advice of playwright friend Ben Marshall, I changed the title from Parable to The Owl Girl. And when I was at the Playwrights’ Center in 2009, P. Carl said “At least give them names!” So I did.

ArtSake: What draws you to the topics of your plays, like the Israel/Palestine situation (in The Owl Girl) or race and American history (in A to Z, which also received a staged reading this month)?

Monica: Maybe it’s what Yeats called “the fascination of what’s difficult.” I came of age when the personal was political. And vice versa. And, as an audience member, I’m drawn to plays which have some kind of mythic or historic resonance. So I make what I like to see.

But also, the plays are what Ursula LeGuin calls “thought experiments.” In The Owl Girl, the strategy was to take the situation in Israel/Palestine and make everything at once extremely literal and yet symbolic at the same time. The house. The key. The grapevine.

A lot of theater (and TV and movies) we see, even if it’s not political per se, confirms a certain view of the world. I like to shake that loose a little bit, to sow questions, a kind of fertile confusion.

ArtSake: You’re also a poet, a photographer, and (correct me if I’m wrong) a filmmaker. What does working in multiple disciplines bring to your work as an artist?

Monica: Craziness! The poetry goes back a long way, maybe the longest. And for the first part of my adult life, that was my main art form. At a certain point, I started thinking I had done what I’d set out to do in poetry, that I couldn’t really go any further. It turns out that’s not true, but that’s what I thought at the time. I was teaching at the Museum School, and I had been doing a lot of visual art and auditing performance classes, and for a while I was making some solo and group performances. That’s what led me back to theater.

I went back to graduate school in theater, and I thought “Great! This can integrate everything I love and have been involved with – language, visual art, even music.” But that didn’t actually happen. I still write many many poems that have nothing to do with my work in theater. And lately I’ve been writing some essays as well – mostly about the intersection between art-making and social change, which is probably the most galvanizing question of my intellectual life these days.

The connection between poetry and theater feels clear to me. Lorca wrote “A play is a poem standing up.” When you work in poetry, you’re learning about the arrangement of words and spaces in time – to elicit a feeling, explore an idea, create juxtapositions that have never happened before. In theater, you still have the words and the silences, and also bodies, colors, music, fabric, the shape of events. And the physical space of the theater and the audience. There’s just so much more to work with.

I love taking photos, and I did shoot a whole lot of video footage of Occupy Boston when I was involved in it. But I wouldn’t call myself either a photographer or a filmmaker. With the technologies these days so cheap, easy, and portable, everyone’s a filmmaker or photographer. But each of these things is a discipline and has a learning curve, and you have to subject yourself to that, not just “Oh, I shot a couple of great photos, so I’m a photographer.” Maybe if I had another life… Or if I reach a plateau, and feel like I’ve done all I can with language, then I’ll have a chance to steep myself deeply in these and see what I come up with. I would love to.

ArtSake: You were one of the 2010-2012 PlayPen playwrights at Central Square Theatre. How have you found the experience of working with a local theater company and with other playwrights in a year-and-a-half residency?

Monica: The Central Square Theater is right around the corner from where I live in Cambridge. It really is my neighborhood theater, and this was a great opportunity to learn more about how that theater works. And I got to work with some amazing playwrights. Joyce Van Dyke was working on the final draft of Deported, which was produced last year at the Modern. It’s a script about the repercussions of the Armenian genocide, generations after it happened. It even goes into the future. Because of my interest in the possibilities of theater and social transformation, that was a very exciting script for me to get to work with.

ArtSake: Looking into the future, what would you like to see happen with the local new play scene?

Monica: First off, I think things are moving along – the Huntington did new work by a couple of local writers last season, and seems to be developing an ongoing commitment to that. Interim Writers has been bringing out unprecedented audiences for readings of new work. And some of the Small Theater Alliance theaters are doing new work, some by local writers.

One thing we need is better press coverage for new work – both wider (covering more shows) and deeper (really articulating what’s happening in a particular show, not just “thumbs up” or “thumbs down.”) And we need some concerted marketing efforts. We don’t really have a sustained audience yet in this town for new work, though we’re starting to.

I’d like to see the bigger and mid-size theaters doing more new local work, not turning to NYC.

I’d like to see a playwrights’ producing collaborative along the lines of 13P in NYC or Workhaus in Minneapolis.

I’d like to see the universities and governments getting into the act – Oregon Shakespeare is commissioning plays about American history – why don’t we have a commissioning project for plays about Massachusetts? St. Paul, Minnesota has public artists in residence, including one to make events, not monuments – why not Cambridge or Somerville?

I’d like theaters developing new work to bridge that gap between readings and performances – “okay, we’ve got it to the point of a staged reading – now you’re on your own.” I’d like to see local theaters committing to going all the way with the work of local playwrights.

ArtSake: The new play development process sometimes involves a protracted period of rewrites. When do you know that a work of yours is truly complete?

Monica: I’m not sure where we’ve gotten the idea that new play writing has to be so labored and so precious. Coward wrote Private Lives in four days, and Shakespeare, Ben Jonson said, never blotted a line. For the rest of us mortals… well, a marble sculptor knows when the piece is done when she feels all over it and can’t feel any parts that still need polishing.

Monica Raymond is a playwright and poet, and her work has been recognized by the Massachusetts Cultural Council in both fields. Her play The Owl Girl, a parable about Israel/Palestine, won the Peacewriting Award, the Castillo Theater prize in political playwriting, and a Clauder Competition Gold Medal. A to Z won the 2011 Ruby Lloyd Apsey Award for plays about race. She has been a MacDowell Colony Fellow and a Jerome Fellow at the Playwrights’ Center, and has taught writing and interdisciplinary arts at Harvard, CUNY, and the Boston Museum School. She is in her twelfth year of trying to live a carbon neutral life in Cambridge, Massachusetts.